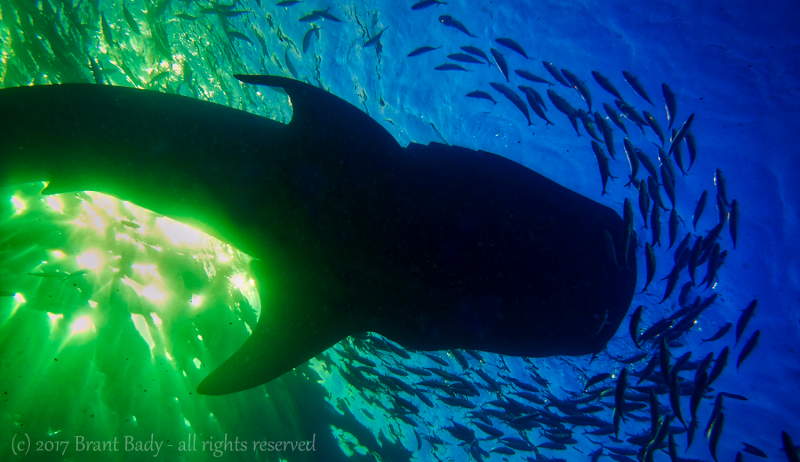 The possibility of seeing and photographing whale sharks, was one of the things in the Philippines that I was interested in checking out. In the past, while on diving adventures in other exotic locations around the world such as Thailand, Australia, Maldives, and Belize that had been a “possibility” – but I had never been lucky enough to spot one from the surface, let alone be in the water nearby.

In the case of my trip to the Philippines, Donsol, was my target location to see whale sharks, explicitly because it has a much better reputation in terms of being a more eco-sensistive, “whale shark friendly” location. Unfortunately, given the limitations I had in my travel plans, and my ability to get to Donsol, I had to take it off my list of possibilities. The other option for whale shark viewing is in Oslob, which likely gets more visitors than Donsol, but has a bad reputation, in part because the whale sharks are “lured in” by the operators feeding them krill (in this case sergestid shrimp mostly). I had an acquaintance who had just been to Oslob, who enjoyed their whale shark experience, but wouldn’t necessarily look at it with the same critical eye as I would. Given the large numbers of people actually going to Oslob, it seemed warranted to check it out and make my own judgement, and then share that more widely.

Getting to/from Oslob is very very easy, there are frequent buses, but the “town” is more like a village that just straddles the highway, and it became immediately evident (based on the various resorts, hotels, and small restaurants) that the presence of the whale sharks was generating considerable economic activity for the locals.

As soon as I was settled, my next task was to sort out where/how to get to the Whale Shark “Centre” where all the activity is staged. My own hotel was quite helpful, and for $1 USD, they would have someone walk me down in the morning, stand in line for tickets for me, and basically make it very easy, it was a total no brainer. What I discovered in chatting with them however, was that for certified divers, there was the option of doing this by scuba, which immediately got my interest, as I was not really looking forward to being stuck with the regular tourist crowd flopping in and out of the small outrigger boats and paddling on the surface. The fee for the standard tourist option was about $20 USD for a half hour out with the sharks, whereas scuba was about $70 for a full hour. I immediately signed up for the scuba option, sized some gear, and made arrangements to meet my dive guide the next day.

Swimming with whale sharks at Oslob is a morning experience, and the earlier in the morning you get to the Whale Shark Centre, the better apparently. I my case, I met my dive guide down by the water’s edge at about 7:30 am, and pretty much skipped the ticket line. Loudspeakers were blasting away instructions to lines of tourists attempting to educate them on the rules of engagement, i.e. don’t touch the Whale Sharks, don’t get in their path, no riding etc., while they were being divided into groups, assigned boats, and then staged to get into the water (tourists were provided with masks and snorkels, and lifejackets if needed – but NO fins – something that I think is just one of the critical mistakes being made here).

In my case, my guide and I just geared up with our air tanks etc., waded into the water, and had a short swim out further into the bay where the whale sharks were swimming around. The water wasn’t particularly clear, and the light angle was bad (the sun was low, so light penetration wasn’t optimal), but generally there were two or three (possibly more) whale sharks that were swimming around in the bay.

What immediately became obvious in the space of the first few minutes, was that the whale sharks indeed were being attracted and induced by virtue of being fed krill on the surface. They were like giant vacuum cleaners, slurping up the krill that was thrown out on the surface of the water. They would make a pass by a boat feeding as they could, then often do a 180 degree turn and go by for another pass. They were certainly accustomed to the boats being in the water, in fact they actively seemed to seek them out as thats where the krill feed was.

I had a perfect vantage point, because I was breathing compressed air from my scuba tank, and I had complete control over my swimming and depth, so it was very easy for me to swim well underneath them without getting in their way or in fact disturbing them to any significant extent – even my rising bubbles seemed to give them no pause or reaction (I am quite used to being with large animals in the wild, so I have some awareness about their reactions and “tells”). While there were a couple of other divers around, that I crossed paths with while I was filming, for the most part the ocean floor and bottom 20 feet of water were my exclusive domain, and I made the most of it in terms of shooting video, in fact my camera in its housing overheated because it was running nearly continuously.

In contrast, what was happening on the surface bordered on pandemonium, as the tourists who were splashing around, kicking, and sometimes free diving down, had little control or restraint – they continually put themselves in the path of the whale sharks, and while I didn’t see any accidental touches, I did observe frequent close calls. The whole premise of this situation is completely unnatural and one of the most haphazard arrangements in terms of actual control over the people in the water.

My conclusions about the whale shark situation at Oslob was initially more positive, than it is now several months after the event. In the immediate days afterwards, I rationalized the “Zoo” I had observed at Oslob in a variety of ways including:

Several months later, the rude slap in the face of reality of additional research and reflection on my own experience has convinced me that whale shark swimming at Oslob needs radical correction, if not complete termination for the following reasons:

If you are visiting the Philippines, and interested in seeing whale sharks, Oslob is the location to pass on and avoid.