The parent to this post is one called Go Ahead, Bite Me, or at Least Try Too!, which outlines all the things that have bit me..   I had hoped that by being a little more careful, I could reduce the incidence of this occurring, but that was just dreaming..

Very recently I got chewed alive on my hands in the Amazon river basin, namely Manu National Park, and then just back at home, a wasp sting to the neck left me main-lining wasp venom right to my brain..

With the former, I had actually done my research, and found a newish, highly rated (by consumer reports), non-deet based bug spray and ordered it online, along with a clothing treatment by the same manufacturer. One problem, it didn’t arrive at my house until AFTER I had started my trip, and it was cost prohibitive to courier to someplace forward on my trip. Luckily I found the exact same brand & formulation (Sawyers, Picaridin based) in the airport in Lima and bought a tube. And indeed it worked great on keeping the mosquitoes off me, but it did not protect me from bites to my hands by sandflies, even though I would repeatedly apply it. Both myself and the other serious photographer on the trip, a guy from the UK, got hit, and his hands were even worse than mine.  I counted two dozen bites on my hands alone.

The USA couple who had applied the same chemical clothing treatment I had ordered, but not received before I left, seemed to enjoy a nearly clear record, in fact I suspect they didn’t get bit at all.  Looking forward to using my own supply on my clothes for my next trip that has bugs.

Luckily on this trip I also avoided getting bit/stung by bullet ants, the viper we saw on the trail, army ants, piranha.. tarantulas, jaguars (although we walked over jaguar prints in the sand, one that appeared to be chasing a tapir by the prints), and perhaps the weirdest of all – the strange bees that sometimes frequent to the top of the jungle canopy, they love to go for your eyes because they want the moisture apparently – only saw one of those.

With regard to the second, a simple wasp sting.. I was back at home and noticed some wasps starting to build in a nest in my sailbags that were hanging from the deck. I hit the nest with a water jet, and then moved in a big circle around my yard to head back under the deck and get inside.. and I thought I was all clear as I walked back to my workshop, but then I felt something crawling on my neck, and tried to wipe it off.. damn, got stung, this one must have landed on me and I carried him in, and he was mad. It didnt hurt that much initially, but it was clearly a wasp or hornet sting.. Problem was that it was on the left hand side of my neck.

It took about 10 minutes, but I started to get dizzy, especially when I was in the kitchen to make a sandwich.. stopped that and went to the bathroom mirror to visually inspect the damage – I had a big welt the size of a nickle on my neck, and indeed I was still getting dizzy – but no change to my breathing or swallowing (I know that I am not allergic i.e. NOT go into anaphylactic shock due to wasp and hornet venom, having being stung before by both). I went back to my computer and tried to quickly google wasp sting neck to see if this was going to be a special experience.. and indeed it was.

I started to pass out, everything had gone red vision wise, and I had a sense that this had the possibility of taking me down, so I quickly dialed/texted a couple of friends and left messages to them call me back as soon as they got this, and then sat back to keep an eye on my condition..

As soon as I stopped moving, and leaning forward, everything settled down, and my vision quickly returned to normal. Breathing was still fine, so I knew it was passing.. and my friends called soon enough and after they had me go through a description of symptoms and a few checks for stroke like or heart attack like symptoms, I had them set to check back with me in another 30 minutes as that is the normal window for significant symptoms to set in.

A bit of research later turned up that in fact the venom from a wasp sting, can on occasion if injected in the right location, cause stroke-like symptoms due to clotting like effect, very very rarely does this occur, it is not a likely occurrence .  I reckon though this fits my symptoms exactly, so I suspect the formic acid and other nasty wasp chemicals must have induced some thickening of my blood for a bit, and gave me those passing out and vision symptoms for a few minutes.

I also think perhaps that this was crossing off another one of my few remaining “nine lives” on the old availability list.  But I also do call this my own honeybadger-like experience because of the famous Honey Badger Video that is out on the internet, with the hilariously “flamboyant” narration.. specifically the part where the Honey Badger takes a cobra strike, does pass out from the venom, then just shakes it off and wakes up to proceed on with its business…

Huge beehive tucked under the roof of a Palace in India – with enough bees and honey there to get any honeybadger excited.  The same Palace also had a colony of bats in one of the stairwells (bats in the belfry almost), and it also had the remnants of a movie set in the back. 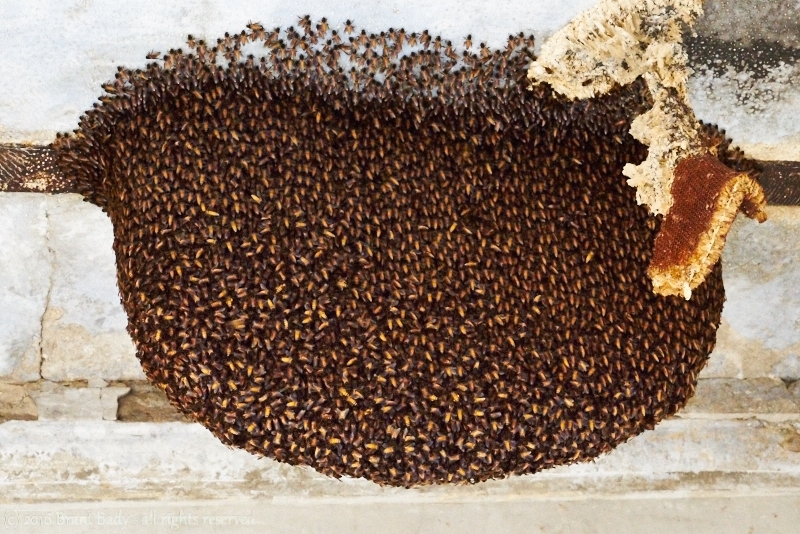