Skip to content
Around the World, Central America, Guatemala, Nicaragua

I really hate uphill climbing, I am in my fifties now, and getting lazier I guess.  In contrast, if an activity is water based, then I am normally game for almost anything.. big waves, fast current, biting marine life – none of that will phase me.   A decade ago, I remember doing the treadmill test with the EKG monitors, it was a check on the old ticker, with the added bonus you get a sense of your overall fitness level depending on how long you last on the treadmill before calling it quits.  At that time, I had the fitness level of a guy 10 years younger than my chronological age, but I reckon I squandered that advantage in the decade since.

This posting covers elements from a much longer trip to Central America, a journey that started in Belize, then Guatemala, parts of Honduras, Nicaragua, Costa Rica, and as far south as Panama, with a return back up to Belize via Yucatan Mexico.   This trip included enough uphill climbing that I nicked named it the “Mayan Treadmill Test”.

I had just came from Tikal, Guatemala where I had climbed around the monuments, including a pre-dawn walk in and up to a viewpoint to watch and listen as the jungle woke up for the day.   That was a completely fascinating experience, well worth it (it would have to be intriguing in order to get me up that early in the morning as he only thing I hate more than uphill climbs is getting up in the wee hours of the morning).  It also gave a distinct advantage that I had time to walk around the monuments of Tikal without the normal horde of tourists who tend to arrive a bit later.

View of the Grand Plaza, Tikal 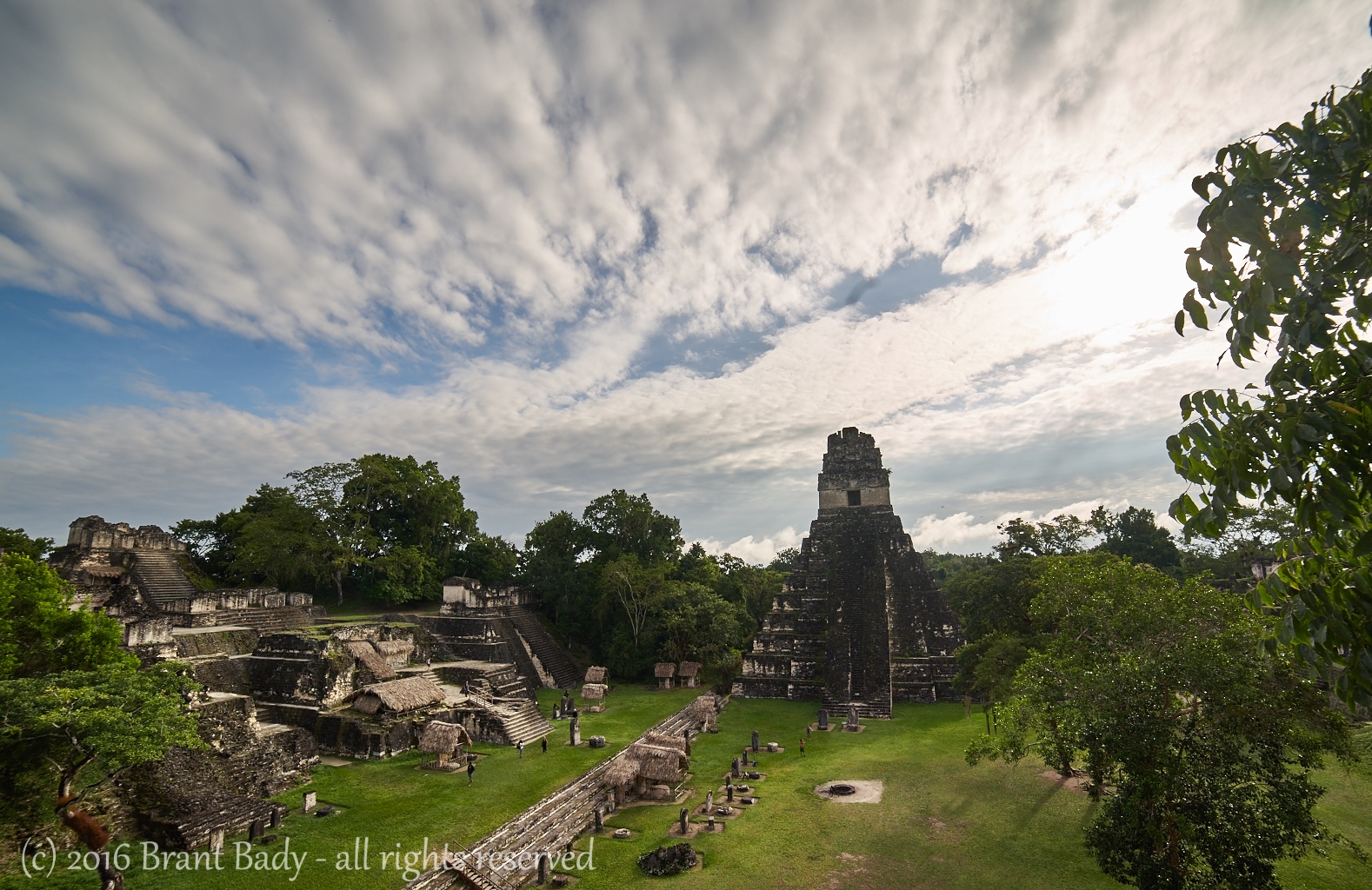 Now I was in Semuc Champey, Guatemala,The attractions in Semuc Champrey include huge mountains and valleys to trek, a river/stream with a limestone bridge, waterfalls and pools to swim and lounge in, and caves that can be explored.  Semuc Champey means “where the river hides under the earth” in the local language, and it is becoming a more popular destination in itself, in addition to being a stop along the route from Antigua-Flores/Tikal.  Its a rough road in to Semuc Champey from the nearest town though, you have to be transported on the back of open trucks along a steep and uneven roadway. 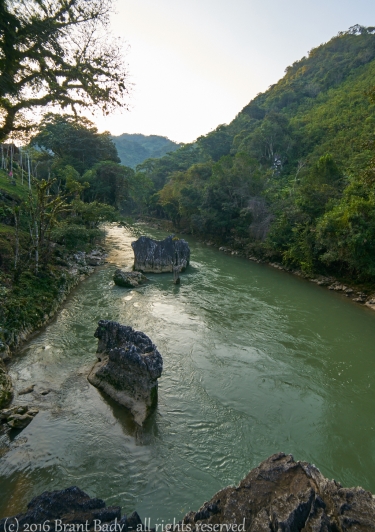 Semuc Champey in contrast to Tikal, is a natural kind of monument located within Mayan territory of the past, and is much more of a physical climb as we are talking some pretty steep mountains.

I was looking to climb/hike up the path to the observation point which was supposed to have a good view of the limestone bridge and surrounding area.  The paths up were marked, but not with any descriptive information.  The first path up that you come to is very steep, and when I was there it was quite muddy as well, so I continued on past to get a good look at the pools and waterfalls up close first, before taking the second path up.  The second was longer in terms of the route, but a touch more gradual in terms of steepness, and it had a number of sections were you are climbing up wooden stairs.  For normal people, it is better to go up the second path, and then come down the first path.

It was thirty two degrees C or higher in temperature (thankfully no bugs), and the climb up was more than a bit annoying (the path would undulate up and down and up etc, so in fact you probably wound up going up the elevation twice).  By the time I reached the top where the observation platform was located,  I was huffing and puffing, my heart was pounding. and my head was spinning so much that I needed to sit and take a drink of water.    A bunch of young guys came over and gave me the “high five”, ostensibly for making it to the top without popping a coronary.  Hence I decided to nickname the climbs detailed in this posting as “The Mayan Treadmill Test”.  Guess I don’t have any heart attack due immediately, as these climbs could have been a trigger.

The view of course was quite spectacular in terms of the terrain. 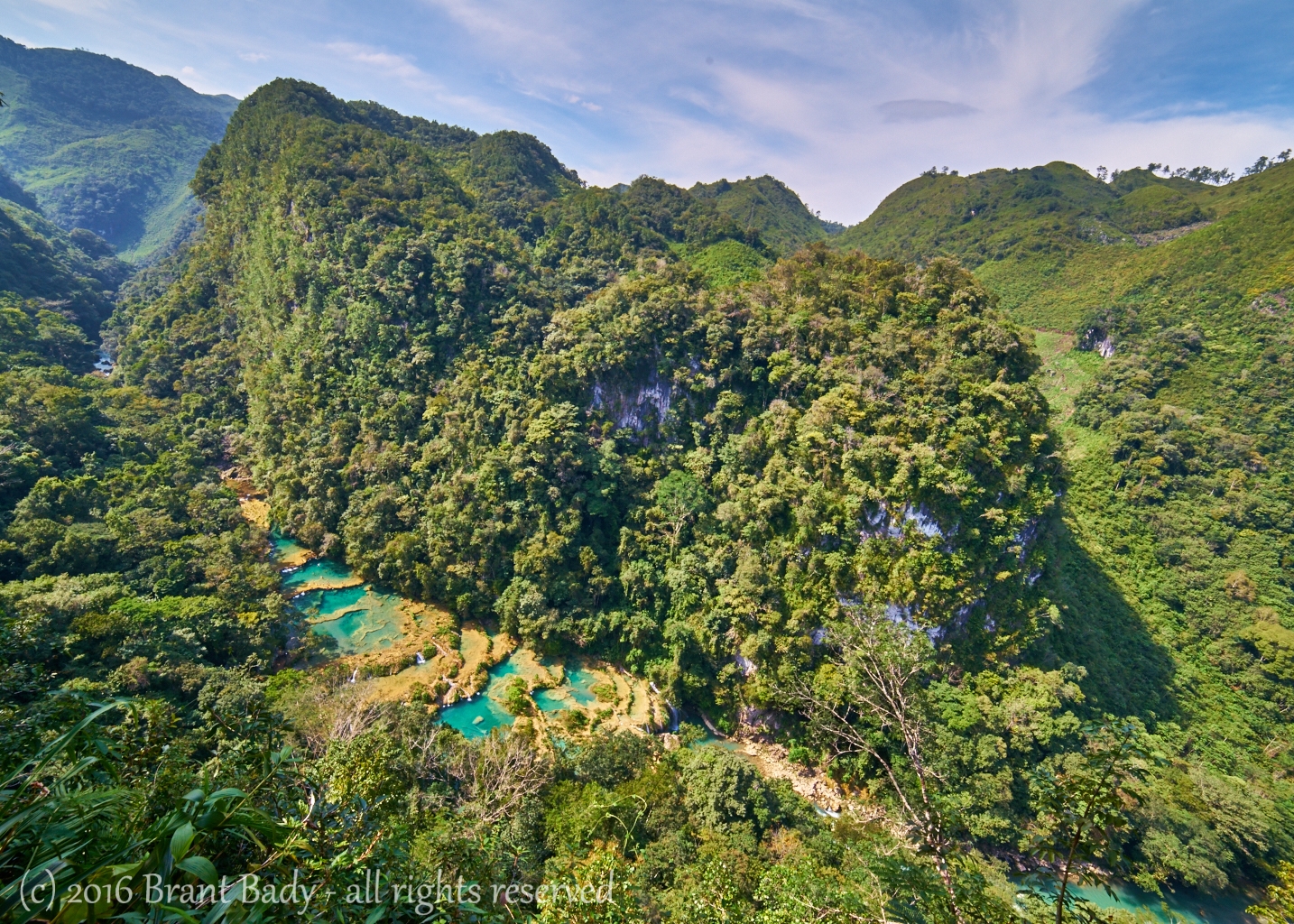 My third and last leg of my personal “Mayan Treadmill” challenge was in Nicaragua, at the active volcano Telica.  Note for historical accuracy, Nicaragua was NOT part of the Mayan empire and there are no Mayan monuments or ruins there, but the ethnic group – the Nicarao –  were loosely associated by culture and language to the Mayans, although they had broken away at some point.

Telica is one of the few volcanos in the area  that you can see molten lava, and in fact it is one of the most active volcanoes in Nicaragua as it erupts and spews ash and gas frequently – it mostly recently spewed ash as far as Leon in May of 2015.

Its a popular tour out of the city of Leon, with a mid day departure, and the trek up timed to reach the top around sunset.  This in fact was my main complaint about the tour company, they insisted we take a route nearly to the top, then instead of going to the edge of the crater right away, we went down into a valley and then up to ridge to watch the “sunset”. 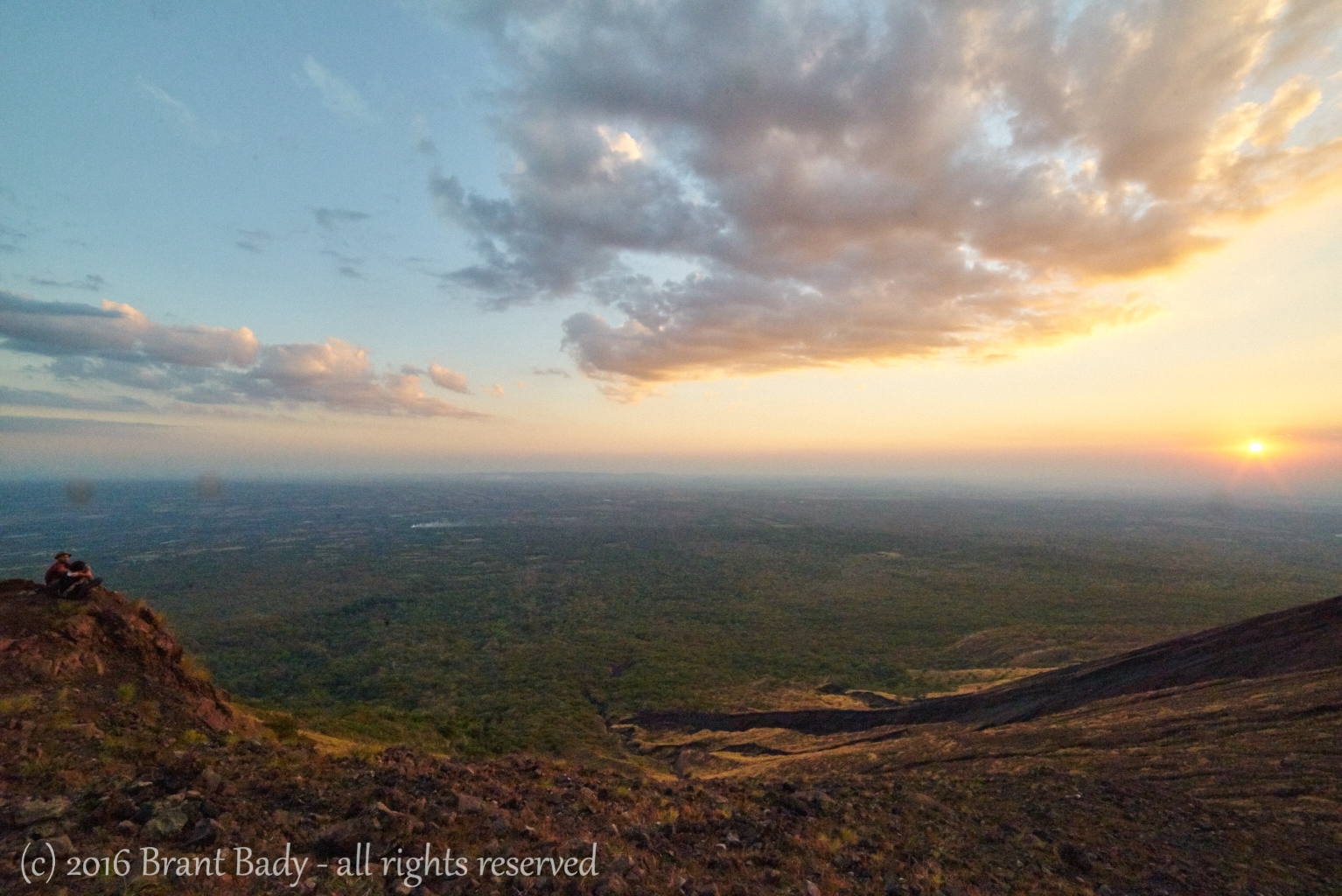 It was only after the sun had gone below the horizon did we finally get to the crater rim, but by then it was quite dark, and difficult for high quality photography.  Peering into the crater has some risk, and people have fallen in, to their demise – the trick is to distribute your weight, keeping your mass back as far as possible, and watching for instability / cracks in the ground right at the edge.   Clouds of smoke, and toxic gas swirl at the bottom of the crater, so the liquid magma or lava, bright orange & yellow in colour, comes in and out of view periodically, as if by whim, just to torment photographers I think. 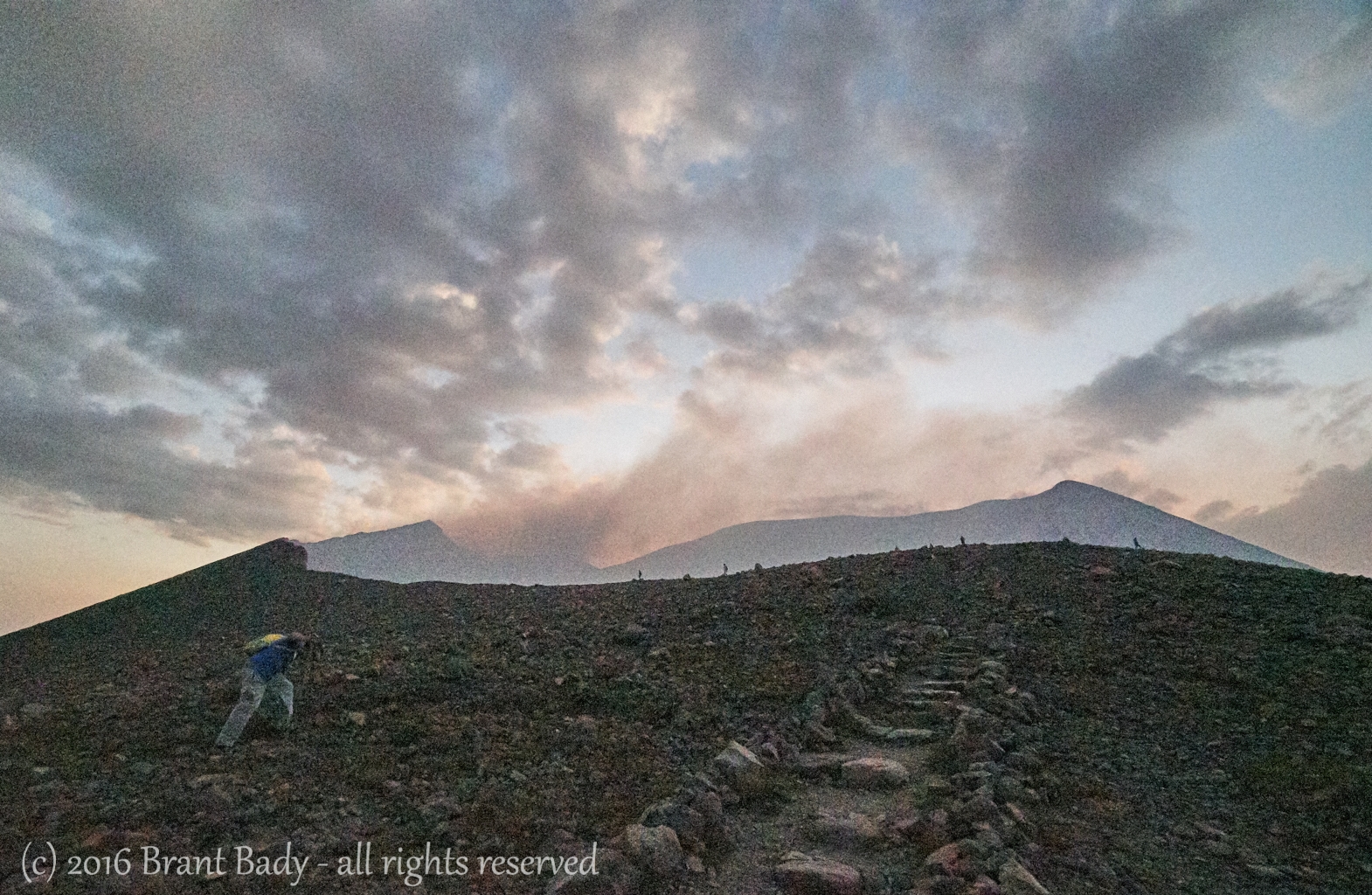 It was completely dark by the time we started to head back down the trail, and flashlights were a requirement.  One older trekker (well older than me at least) lost his footing and stumbled and wound up falling to the ground, luckily he incurred no physical damage – just his pride was bruised!