What was supposed to be a CALM three day visit to New Delhi, i.e. take it easy, get my bearings, figure out the main systems in place for India, get sorted out with an Indian SIM card for voice and data etc., morphed instead into a completely over the top gonzo trip to the Holy city of Pushkar.  While in Bangkok, I had made some connections with a photographic group, and they were just about to head over to India to visit Pushkar for its famous Camel Festival. 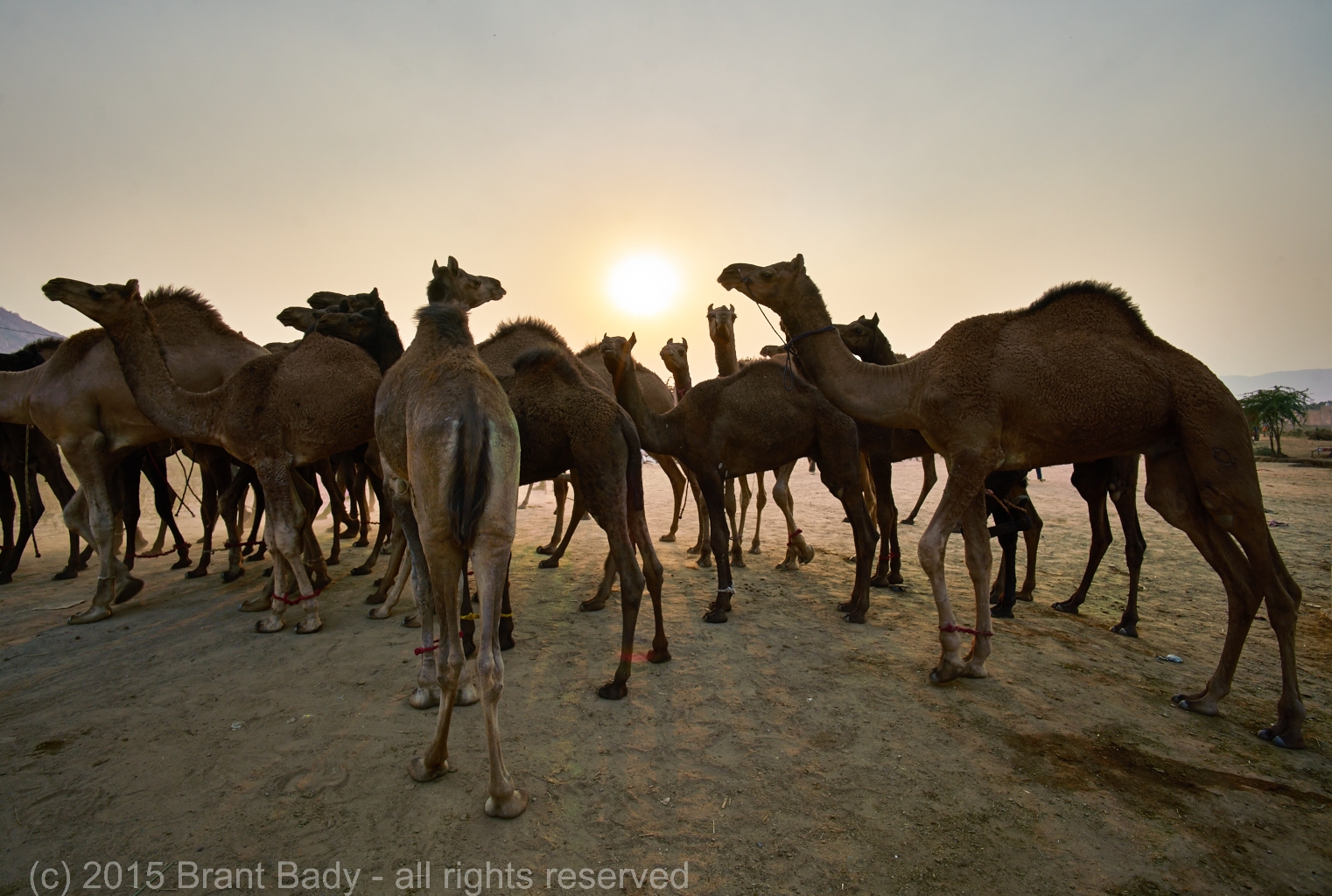 While my dates didn’t align with their tour, and in fact I was a bit early as my travel window was just before the main Camel Festival reached its peak – it remained my best and only shot at experiencing the event.  So rather than acclimatizing in New Delhi, the first morning in India I was off on a plane to Jaipur, and had arranged a hired car for the 2nd leg – namely traveling by road from Jaipur to Puskar.  I figured that I would have an afternoon and a morning to wander around taking photos of the Camel Festival and the city, before needing to return to New Delhi to catch my next flight to Sri Lanka.

My ignorance of how things in India worked became immediately obvious (when you have traveled as much as I have, it becomes obvious that ever place has its own quirks and idiosyncrasies.  I needed money, and the ATMs I had my driver stop at in Jaipur weren’t forthcoming, most were not hooked up to any of the international networks, and/or didn’t like my ATM cards.  Eventually I found one that worked and dispensed some rupees for me, but this would prove to be a challenge across India – in one town I had to try fifteen different ATM’s before I found one that was in working service, actually had money, and would accept my card.

After checking into my hotel, and grabbing a quick snack, I set off with my camera to the locate the fair grounds and see the sights… 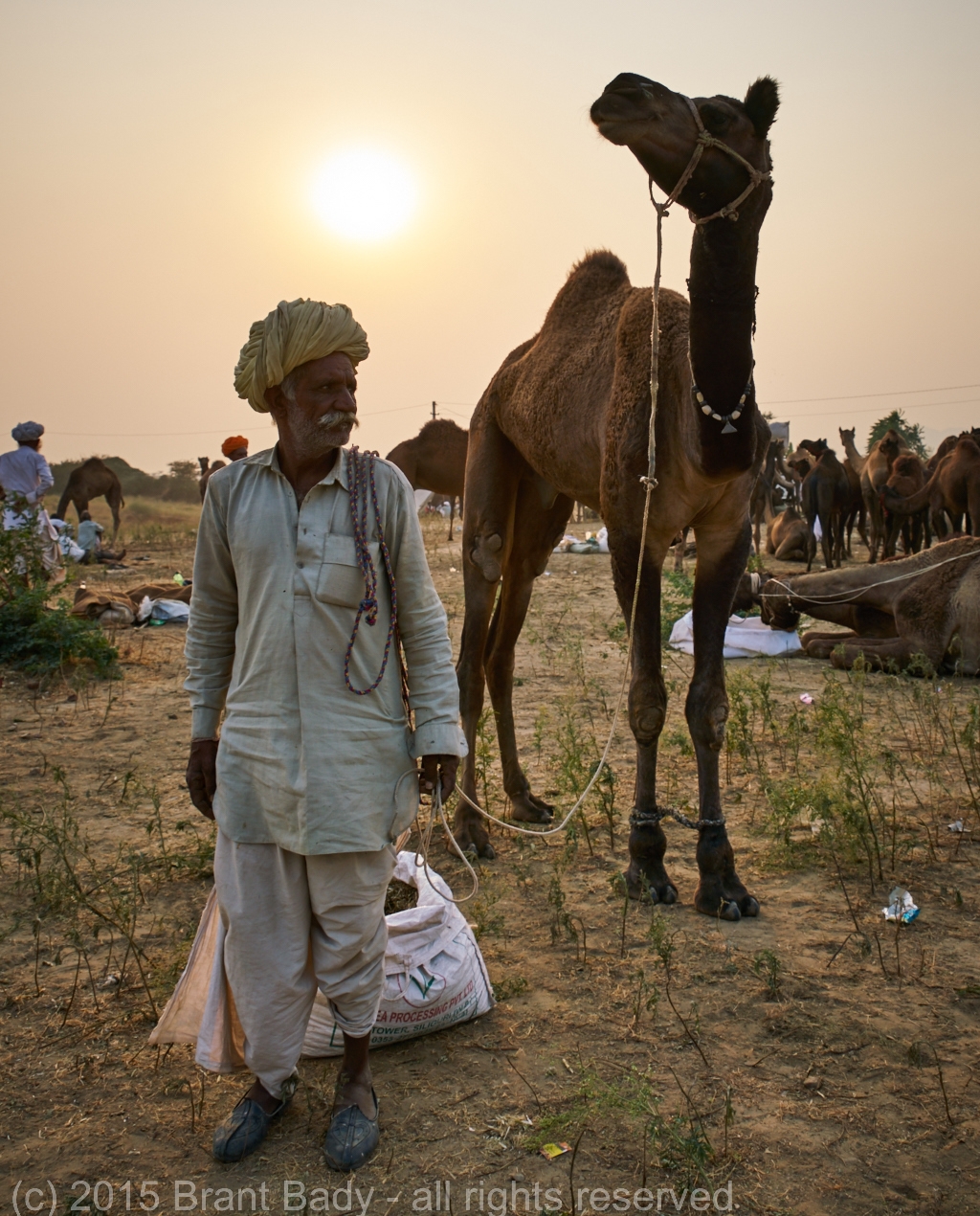 Indeed, there were herds of camels everywhere, although few were being decorated up for display, they were being fed, watered, bred, and even milked.  One of the less pleasant aspects was witnessing a young camel getting a nosepeg inserted so that it could be led around with a rope.  Lots of blood, lots of struggling, and lots of screaming and groaning.

No need to “Belly Up to the Bar” when you have a physique like this, its merely a long stretch… 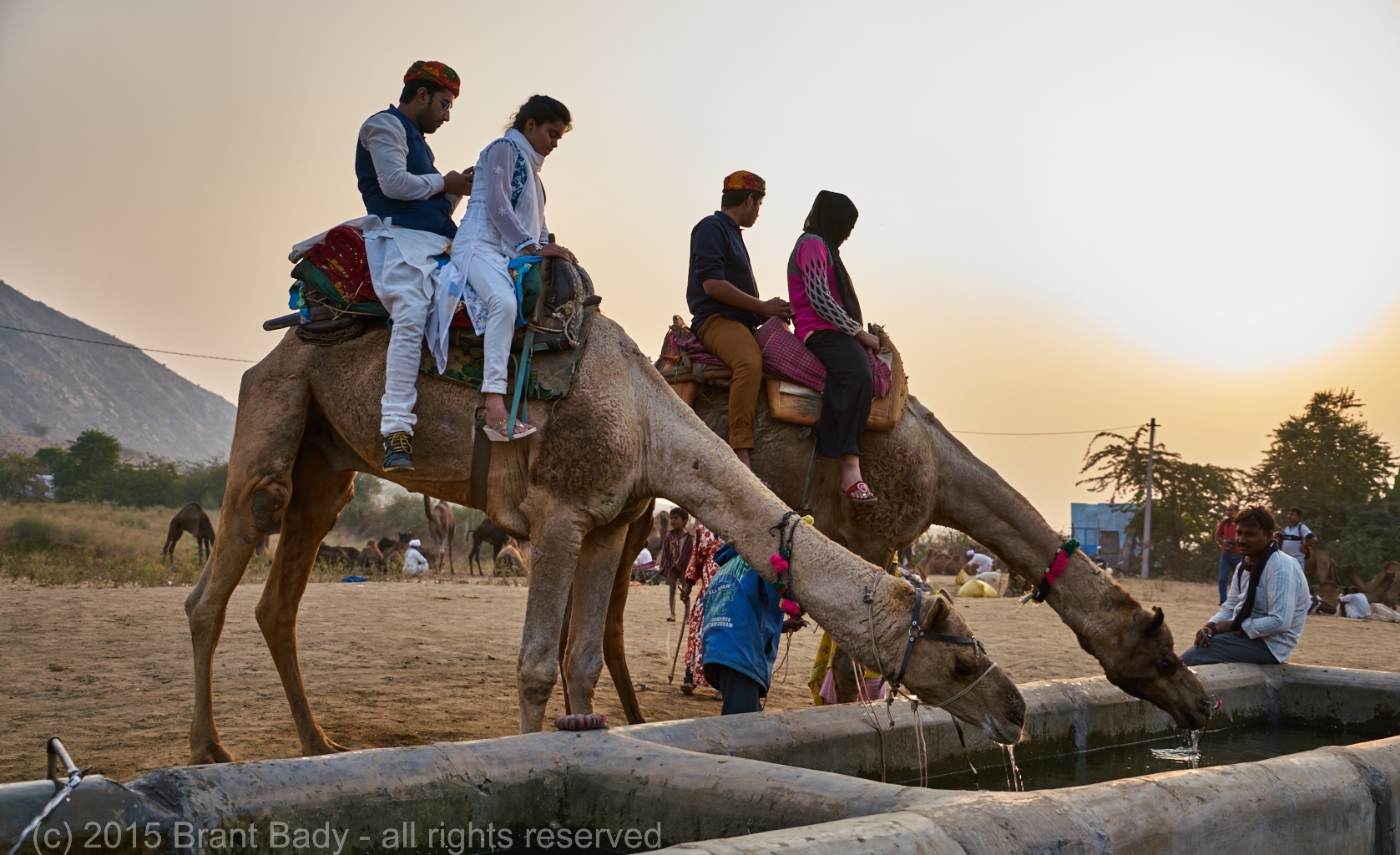 The herders slept in tents amidst their herds, and could often be seen cooking their own meals over small fires. 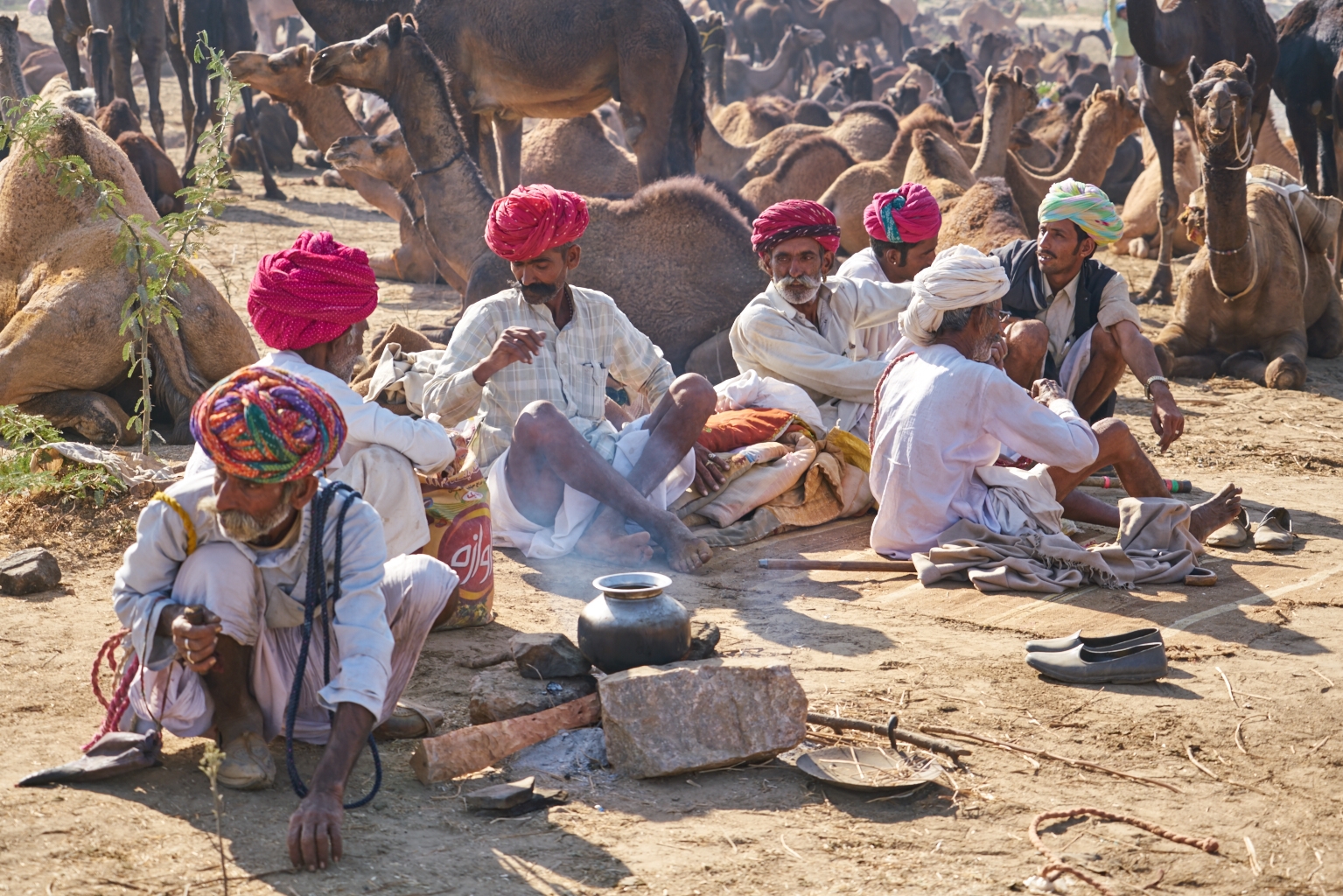 With the abundance of camels, and their requisite “output”, camel dung is frequently used as a fuel source for cooking, and collecting and drying it is a task for women and children.

Collecting Balls of Dried Camel Dung to use as Cooking Fuel 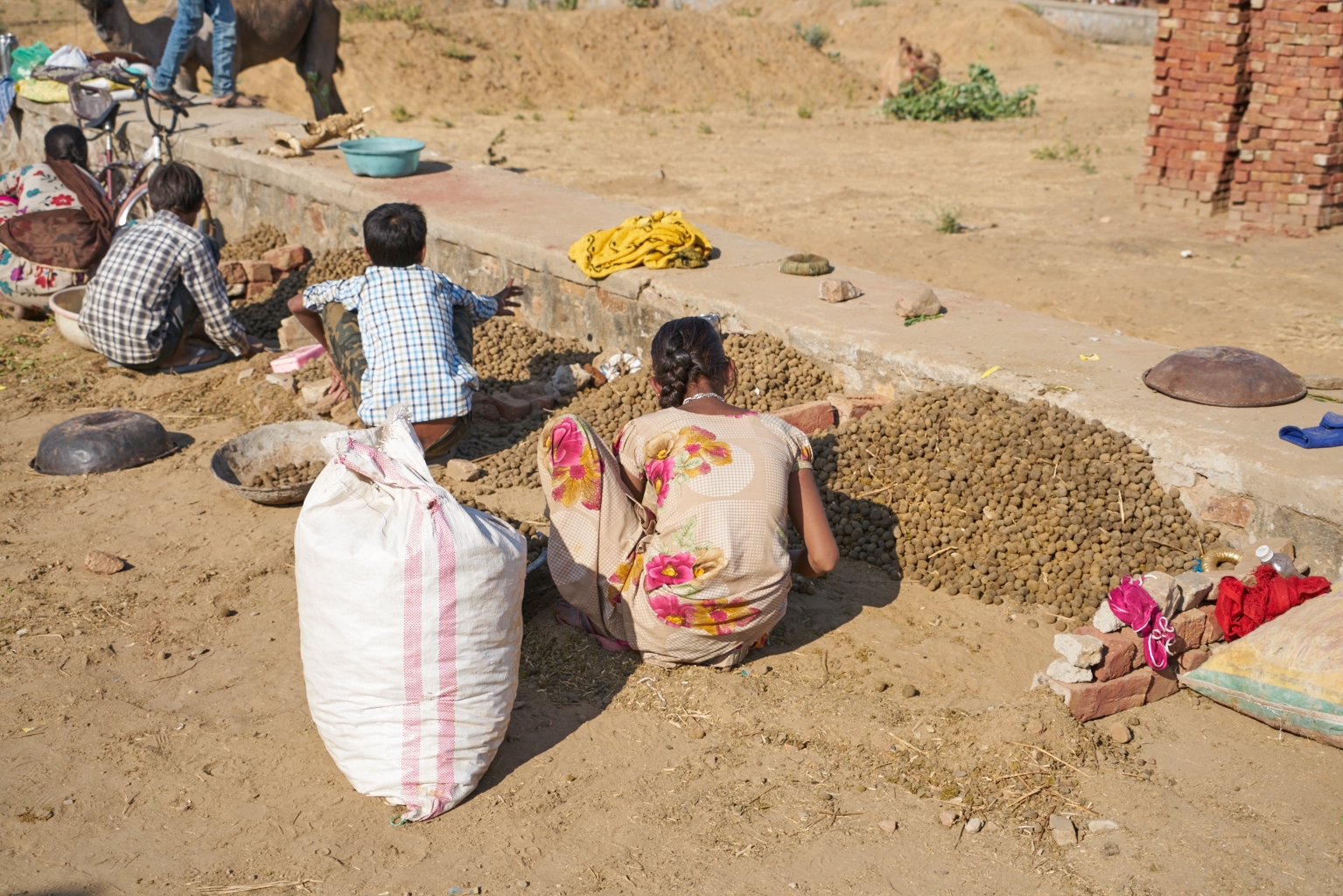 Apparently camel milk must be something they consume, as I came across two guys who were attempting to milk one of the females – the proscribed technique being one guy grabbed the tail of the camel in question and leaned back to steady the animal, while the other guy went to the udder with a container. 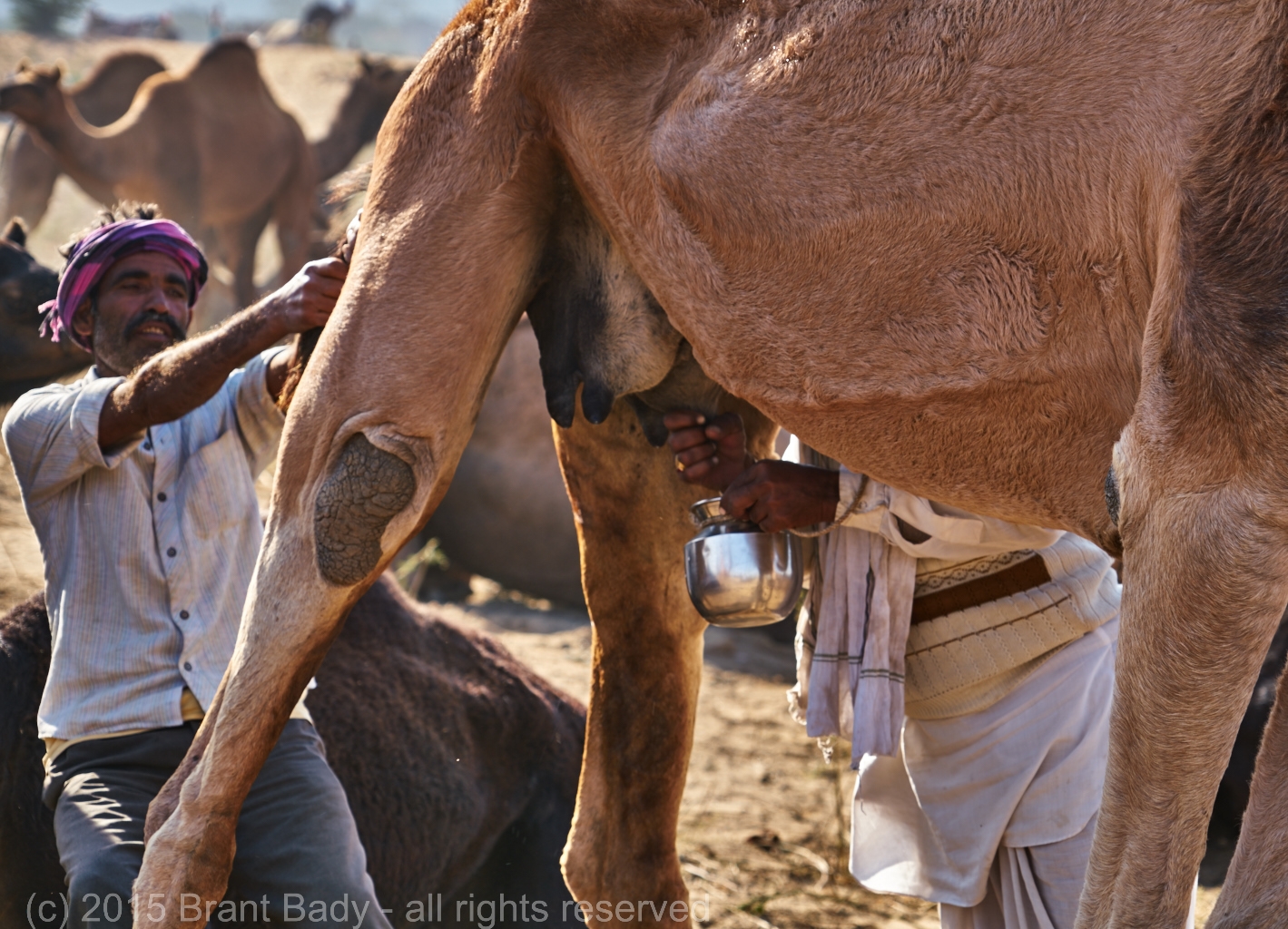 Obviously they know their animals, and so the milking was a success.  But I was also warned off a number of times about getting too close to the animals – they bite, spit and kick – and I was oblivious to their “tells” and other signals so I wouldn’t necessarily see it coming in time. 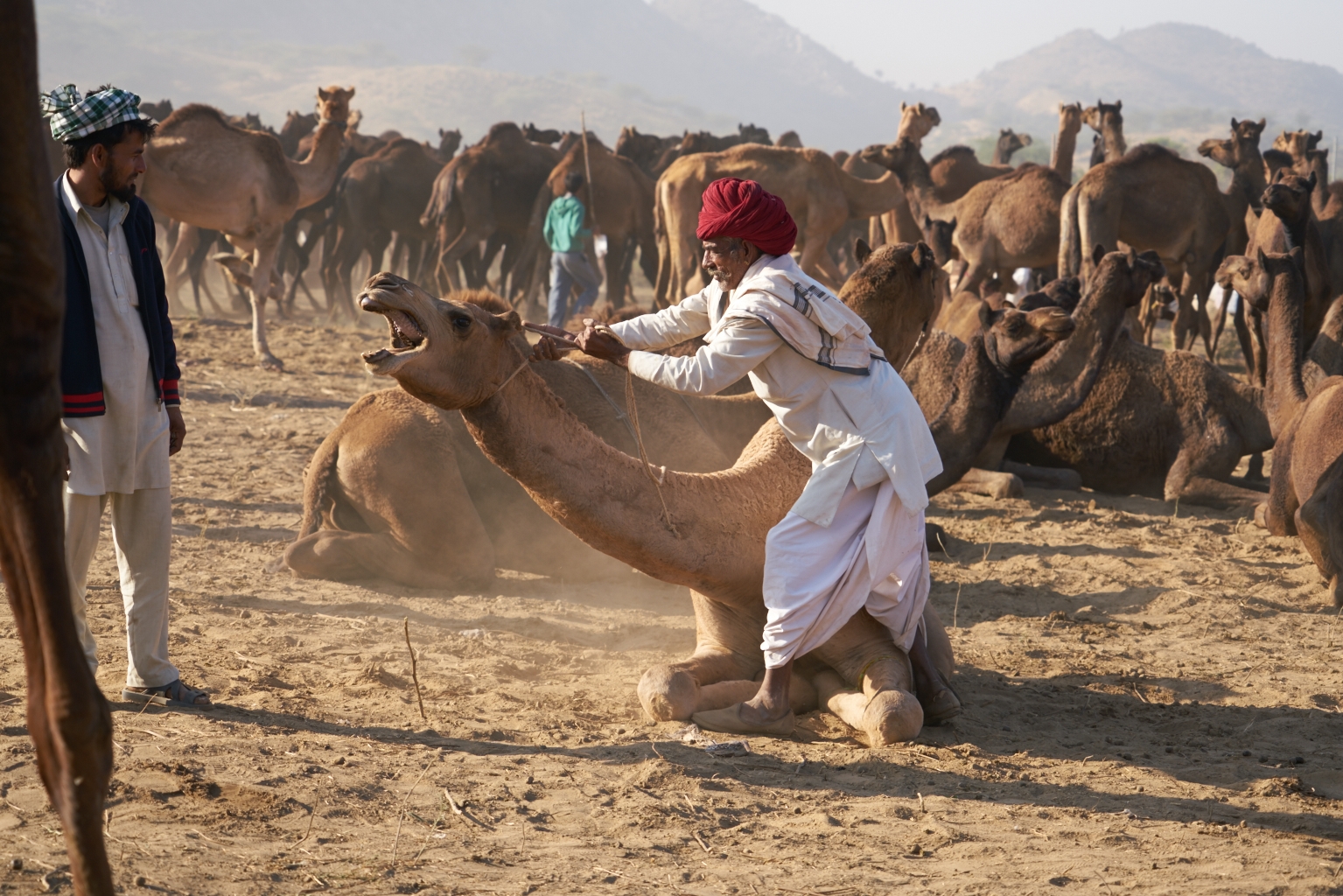 The Camel Festival is also an opportunity for hawkers to make some money selling trinkets and souvenirs, so as you would expect, I was frequently being pitched by vendors to “just come in a look, no need to buy”.. the most persistent were the kids, one latched onto me in order to guide me around the fairgrounds.. which naturally meant – guide me over to his family’s stall. So we cut a bit of a deal, I agreed to let him show me around, in exchange I also agreed to come over to their stall and check out the goods, even though I made it quite clear that I was not in buying mode (no desire to carry any trinkets around in my suitcase for the next 4 months, nor did I have  the time or opportunity find a post office to mail any purchases home).  In the end he asked me for some Canadian money, possibly as a souvenir, although I wouldn’t have been surprised if he actually knew the exchange rate.. So I gave him a fiver, as the kid was an okay little dude.  Another little urchin decided it was his mission to jump into my photos to spoil them unless I payed him off.. when I turned the tables on him by getting right up into his face and then to his surprise, chasing him around a bit in return, he backed off right away (not that I would have actually done anything, but this was one of the few times when traveling its appropriate to “huff and puff” in wolf-like fashion, so as to not have to continue to deal with the nonsense).  In effect putting the fear of god into him was more effective than giving into his extortion attempt. 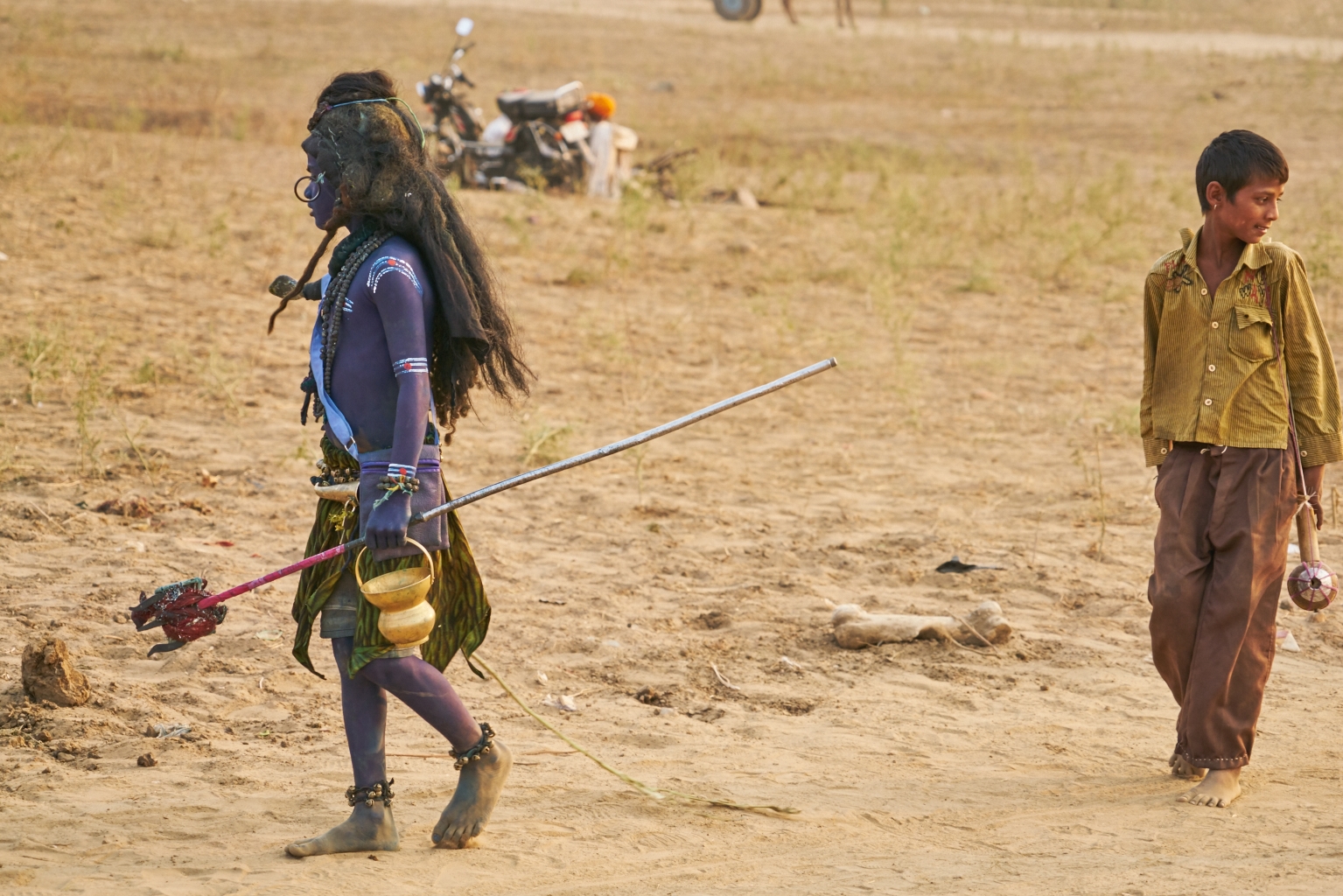 That evening, I ran into the second challenge in India that would persistently come up – I wanted a couple cold beers, and Pushkar, being a holy city, is both vegetarian AND alcohol free.  I was advised by my hotel manager, that it was possible to venture outside of city core to the outskirts to find restaurants / bars that served both. however, a bit of googling revealed that alcohol at least could be obtained discreetly if one asked quietly.. not to be consumed in public view, the practice was that a few of the restaurants would serve it, with the bottle wrapped in a paper towel so that it wasn’t obvious.   Mission accomplished, that problem was solved – at least for Pushkar!

The next morning it was back to the fairgrounds to take some more photos before the light went bad (10 am to 2pm is normally the worst time of day for photography if the sky is clear, as the sun is too bright and the shadows are too dark and contrasty).  Wandering back, I made the mistake of taking a peek at the ghats (a series of steps that lead down to a body of water, normally one that is holy) and the lake with my camera in hand.  I was not looking to photograph anyone bathing or undertaking other religious rituals, but instead to get a sense of the activities and to take a few broad landscape views of the lake.   Second mistake was to accept and handful of flowers and follow the direction of one of the locals down to the waters edge.  I was greeted by a “Guru” who then proceeded to perform a ceremony with me – related to my family.  The real purpose was to extract a very significant cash donation, to which I succumbed to because I was not confident of the situation and whether my presence there was inappropriate.  Later on I ran into two sets of other foreigners, who similarly got taken by the same scam.  Its apparently quite difficult to get out of, but it did teach me a valuable lesson.  I reckoned I had donated enough cash to earn great karma for the next four months, and that I merited a high level of immunity from being taken again.

My next “lesson” was not long afterwards, I had arrived back in New Delhi that evening, and had taken a cab to my hotel, except the driver got the address and name wrong, and dropped me at the wrong hotel from where I had my prepaid reservation – the name was just very similar.  So there I was in New Delhi, without any internet connection, no clear idea as to where my hotel really was (staff at the wrong hotel just pointed down the road).  I set off with my two bags, my camera pack on my back and dragging my two wheel roller behind me.  Minor problem.. its NEW DELHI, its rush hour, and there isn’t even room to walk down the road on the sidewalk because the sidewalks are packed with motorcycles, bicycles, auto-rickshaws trying to get around the traffic jam on the roadway.

Lucky for me, my actual hotel was only about 1 km down the road.  It was an electrifying experience, particular when I got into my room, and brushed against the cable TV box hanging off the wall, and got a powerful electrical shock!  Not full 220 i think.. but like a cattle prod in terms of current..  Holy cow, I got juiced for sure!

Thus was my first three days in India – I was starting to really wonder what I had gotten myself into, but I was off to tour Sri Lanka starting the next day, and I was a bit smarter for that as I had hired a car and driver to transport me around, show me the best places, and help negotiate any travel difficulties as they arose.

Two weeks later I was back in India, this time starting in the very far south, Thiruvananthapuram [Trivandrum], with the plan being to move and explore by moving northward!