Rajasthan State and the Bus Ride from Hell

My next step was to venture into Rajasthan State in order to see some of the desert, and the historic forts and palaces that had been used to hold and control the territory.  Alas my route there was most certainly not the usual tourist path.  I was in Amritsar, in the Punjab, and I wanted to head nearly due south down to Jaisalmer, but there was no convenient path as the trains didn’t run in that direction, and there were no direct flights – typically you would have to backtrack to Delhi or Jodhpur perhaps.   The only realistic choice was by bus, and given that it was going to be a 12 to 14 hr journey, the non-stop overnight “private” bus looked to be the most reasonable in terms of timing (otherwise it would be more like a two day trip with a stop in an intermediate town).  The cost was relatively high at 1100 rupees compared to all the other buses I had taken, so I envisioned that it was going to be a private bus of similar ilk to what a Greyhound bus in North America would be like, but it was billed a sleeper, so I wondered how that was going to be achieved.

The directions to the pickup location were pretty vague, and it was 10 pm at night, but I finally found the business where it was leaving from, and boarded it on time.  The bus was not luxurious by any means, in fact the coffin like lay-down compartments were set on two levels.  I peeked into  my assigned one, and it didn’t exactly give me the impression of being clean or comfortable.  My stomach had been a bit upset, so I asked one of the locals where the toilet was onboard.. he laughed and pointed to the window….. great.  I immediately popped two Imodium tablets to try to forestall any GI tract problems for the journey, and we were away.

At this time (Dec.) and point in Northern India, its actually darn cool out, and expected to drop down to 12 degrees C overnight.  I had a very limited amount of warm clothes, so I tried to layer up, shirt, fuzzy pullover, safari vest on top, and just pants and I draped a nylon windbreaker over my legs.  That probably would have sufficed, but my compartment had a sliding window in it, and a broken latch, so every five minutes the window would shimmy open about 5 inches and I would get a blast of cold air.  Consequently I both froze and didn’t get any sleep.

I must say that there is not much here to see, mostly its just a dry desert town with a few temples of note, and a fort, but I used it to recover from the cold that I got from the horrendous overnight bus trip.   The notable attraction in the area is the famous Temple of Rats about 20 km out of town.  Alas I forgot that this was a Hindu temple, so one has to take your shoes off when going inside (wearing socks is okay).  My dilemma at the temple entrance was “do i risk going bare foot  (and yes, the place stunk of a certain Eau du Rat, as well as it was obvious that there was rat feces and urine liberally spread around), or better to wear socks”?  In the end I didn’t want to permanently contaminate my shoes with rat poop infused socks after the visit, so I first checked my feet for any cuts and then prayed that the soles of my feet had toughened up a bit.  Next time I will carry two pairs of socks, one for before and one for after.

This guy , like the other locals, was pretty chilled about the whole situation.

“Chilling out at the Temple of Rats” (Karni Mata), Deshnok 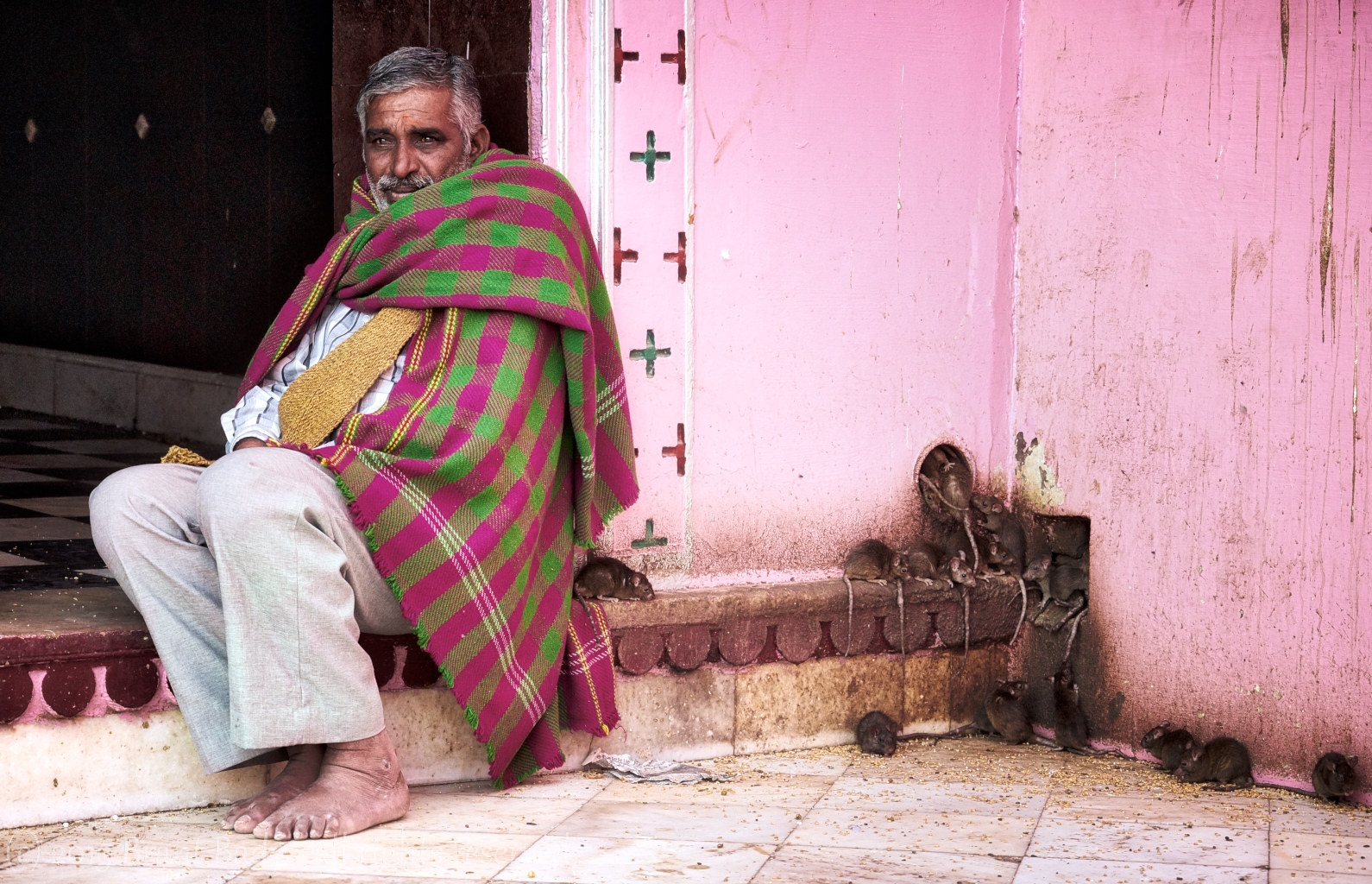 “Denizens of the Temple of Rats” Karni Mata, Deshnok 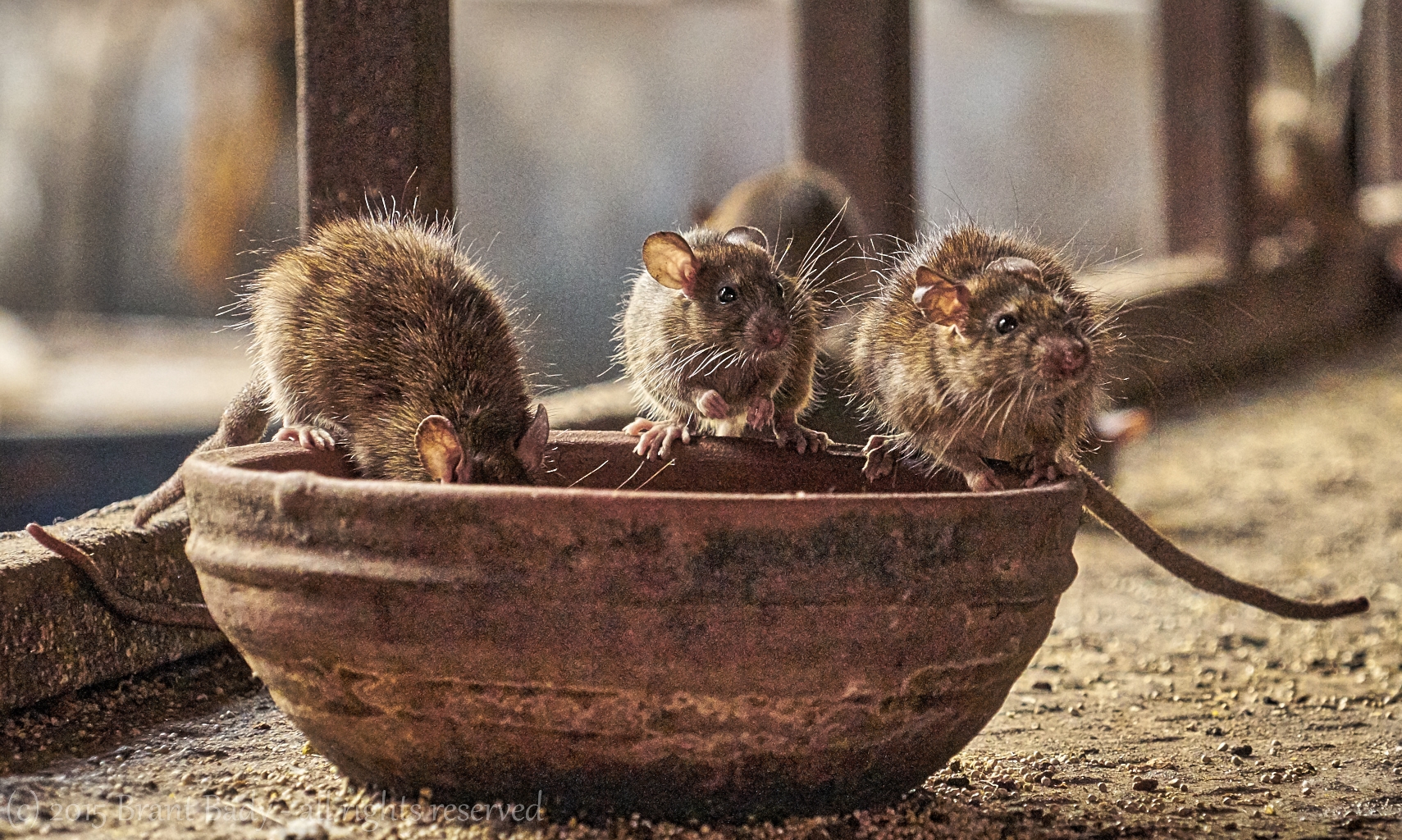 Even the Temple doors have the Rat motif incorporated into the design. 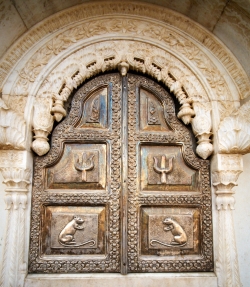 I really enjoyed Jaisalmer, its got a great vibe about the town, and there are a number of interesting things to see and do, and it was a target rich environment photographically. 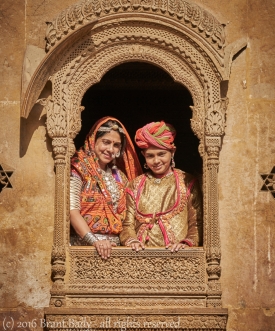 I took this next shot over a dinner of “butter chicken”.  Seriously, I went to this restaurant rooftop to be a carnivore again by taking a take a break from the plethora of “veg” restaurants in India, and it just “happened” to have a decent view, so I was able to combine two pleasures in one sitting. 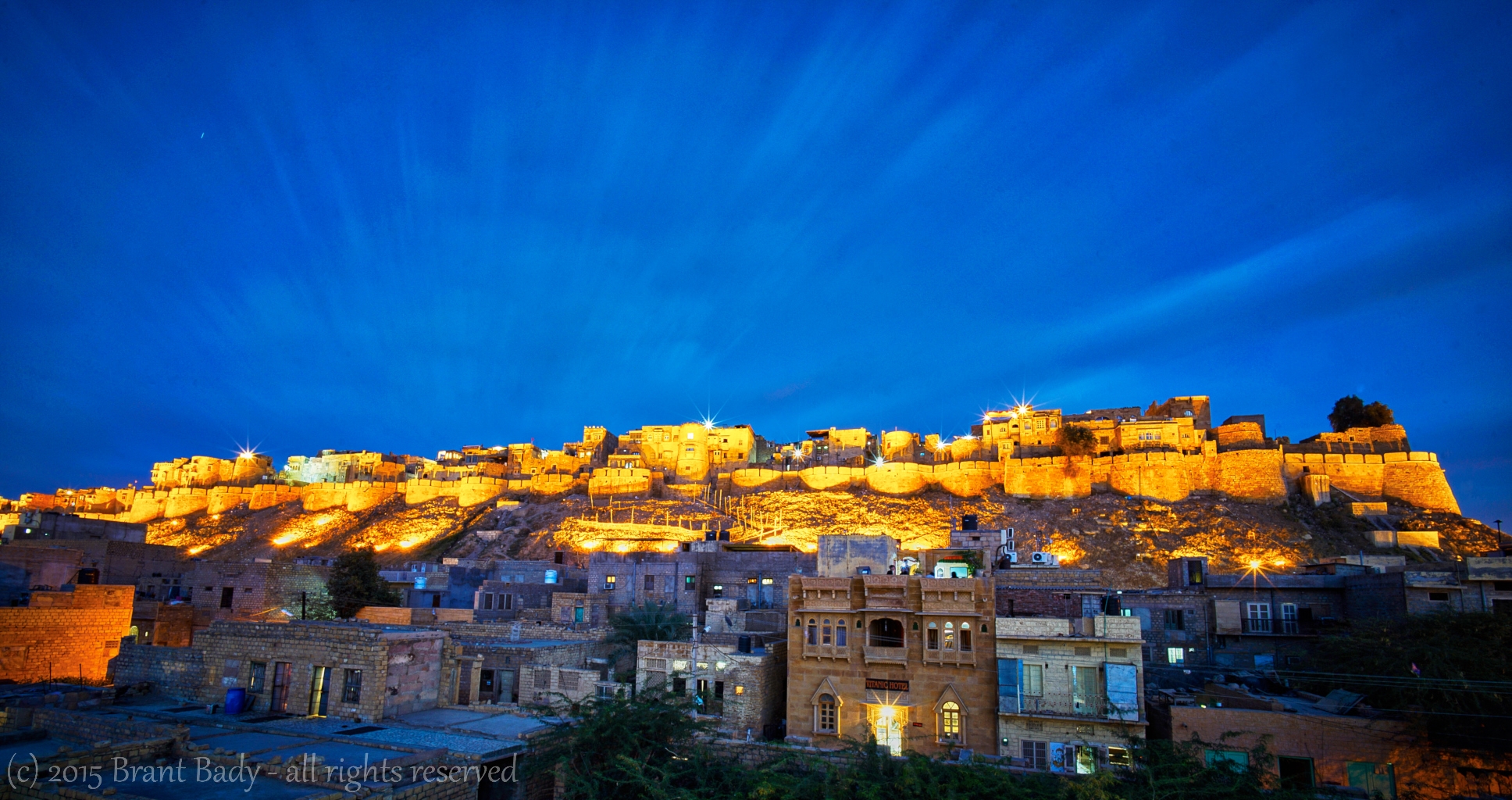 The hotel I stayed in was inside the fort, and was a stone room.  Notably there was a central pillar in the middle of the room leaning at an angle like the Tower of Pizza, and holding a stone horizontal crossbeam. Hmmm, I wouldn’t want to be inside here if there was an earthquake, but the place did have a certain ambiance that I liked. 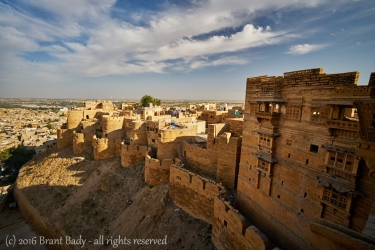 There was a lot of uphill climbing and stairs, because forts, towns, and settlements in Rajasthan  tend to be centered around elevated places that are more easily defended.  In my case, all the stair climbing was good for the old waistline reduction program.   The part I don’t understand, is why its not really getting any easier – after the uphill climbs I have done in 2015  (Mayan temples, the Grand Canyon, and volcanoes and mountains in half a dozen countries), its not getting any easier… sigh.  But at this point in the trip through India, I was losing a kilogram of weight every week, so it was certainly moving in the right direction!

It was worthwhile time spent wandering around in the palace inside the fort, as well as the Jain Temples located inside the perimeter of the fort as well.

“A Room with Only a View” Interior – Jaisalmer Fort, Jaisalmer 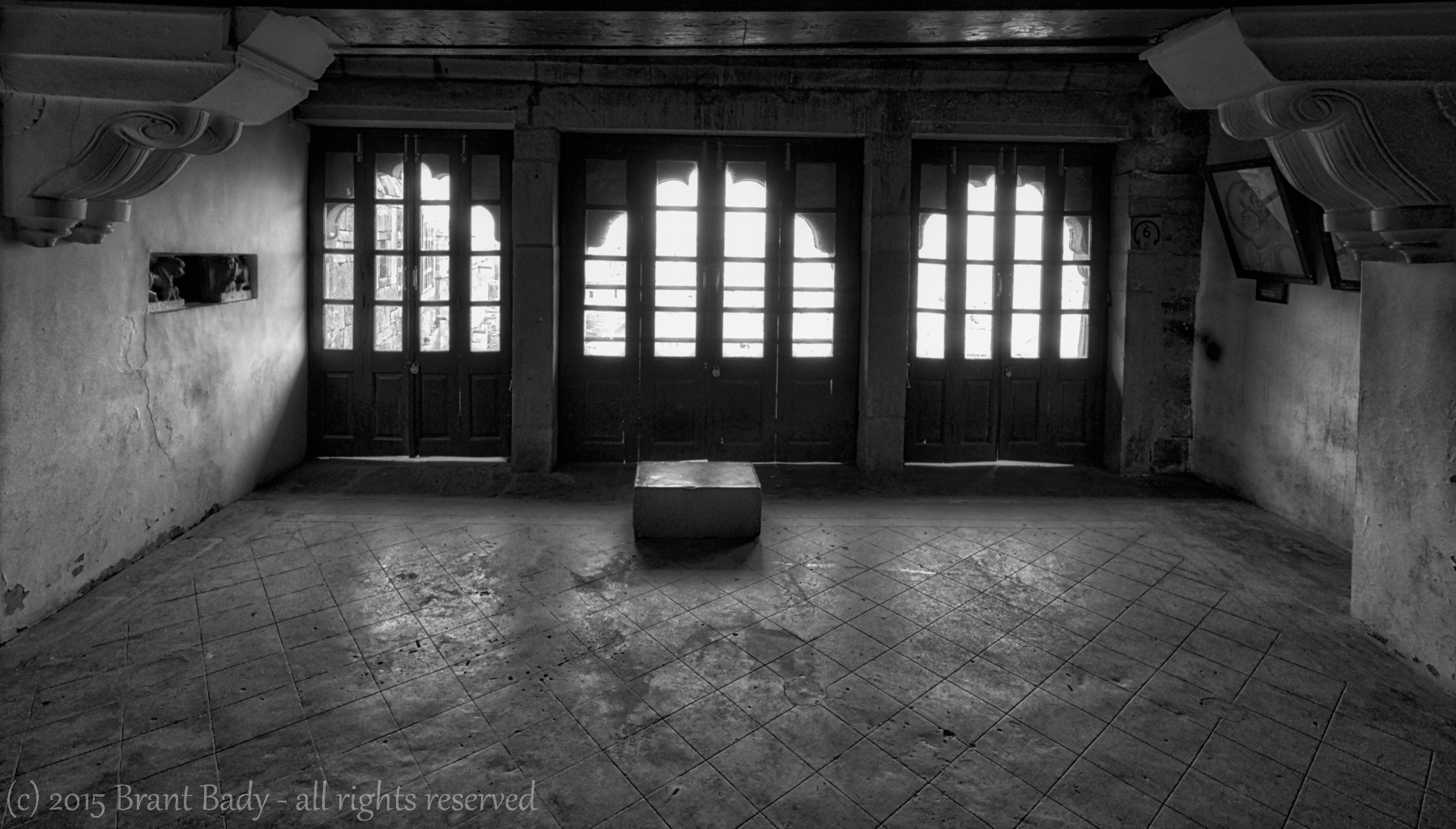 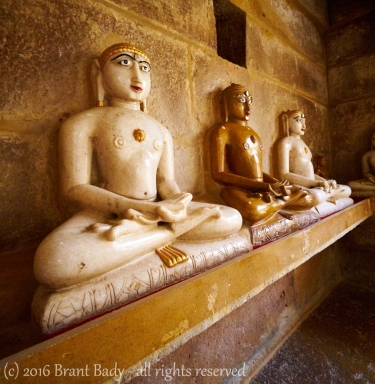 This place is desert, with dunes outside of town, so camel riding is one of the attractions/activities that is extremely popular with lots of tour providers fighting for the business.  (note, you can do the same thing out of Bikaner, where its a bit more laid back, but you are more likely to get out into sand dune country when you do it out of Jaisalmer. 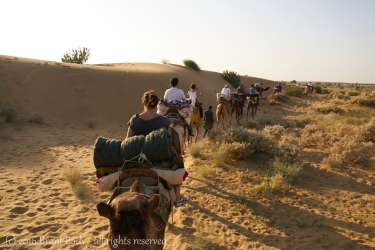 To paraphrase T.E. Lawrence…’The “Trick my dear’ fellow, is not to mind that it [riding a camel] hurts’.  I guess I have some work to do on that, as two hours on the back of a camel was more than enough for me.  The inside muscles of my thighs were on fire the last hour, and I couldn’t wait to get off.

Getting Camels Unsaddled and Ready for the Night 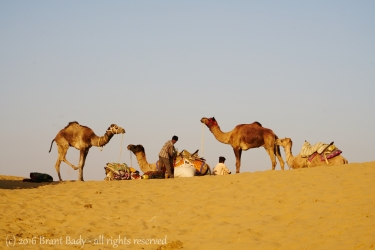 Sunset in the the Thar Desert 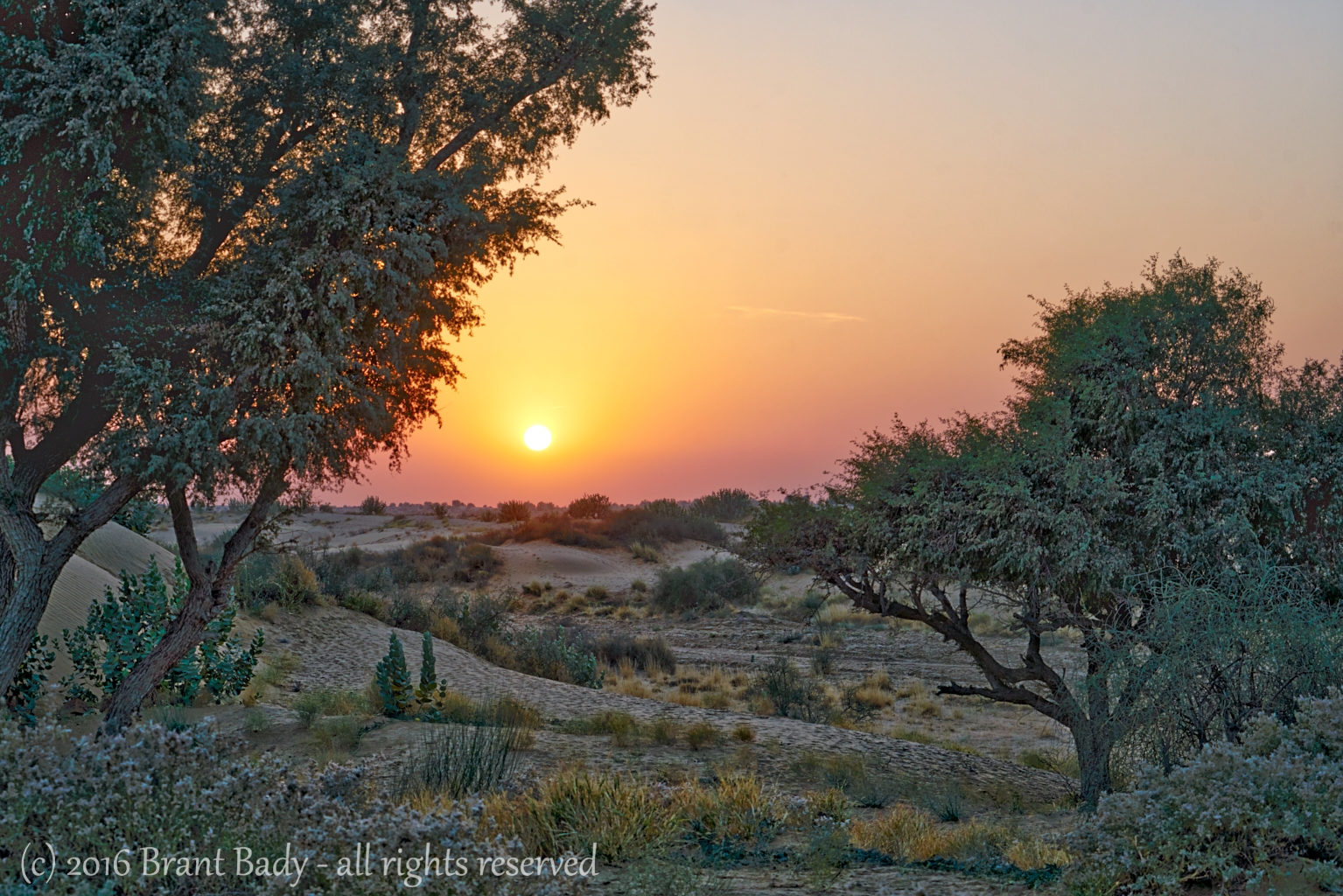 I had to run to the “Lassi shop” apres camel ride and get them to make me a Honeybadger’s Special Camel Spit Lassi… think of egg nog and rum.  You know the saying, “Hair of the Dog That Bit You” this is instead, “Spit of the Dromedary that Humped You”.

“Catching up with Current Events at the Shop of Odds & Ends” 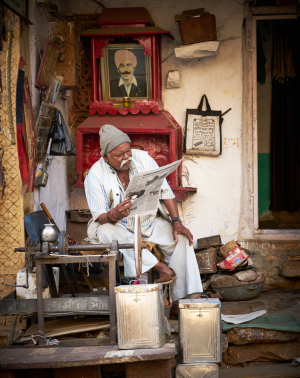 There is also a lake at the edge of town, with some of the more iconic historical structures to been seen, and it is quite popular with the locals who like to rent boats and paddle around.  It is also common to see holy men who make a daily pilgrimage to certain sites and temples. 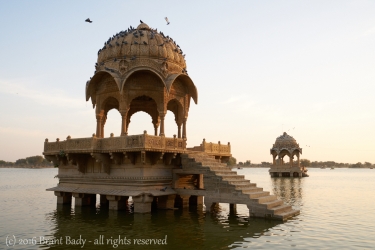 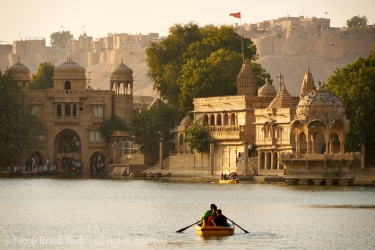 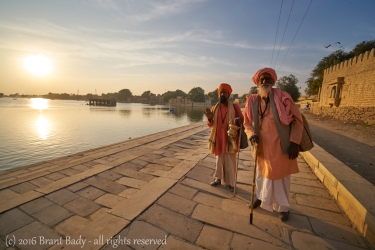 Jodhpur and “The Hotel California”

To clarify the title of this section, that was Hotel California in that vein of “you can check out but you can never leave” , also known as the “Hotel from Hell”

I have traveled to 37 countries, stayed in over 500 cities, and thousands of hotels, and the place I stayed here is by far the worst hotel I have ever stayed in.  It was far from being clear! There piles of pigeon droppings in front on many of the rooms (this is inside the hotel), and my feet would turn black walking from the bed to the bathroom, not to mention the deposits of “whatever” on the walls.

To add injury to insult, my departure at the end of my stay in Jodhpur was by no way smooth, as the staff physically tried to prevent me from leaving, twice!  My booking was paid in full online, and I paid my restaurant bill that morning after eating. I went to check out, dropped off the key, and then went to the street to hail a cab.  The front desk clerk accosted me on the street saying I had to pay, but he couldn’t really understand English, so I wasn’t successful in terms explaining that I had already paid. I showed him the booking on my mobile that said paid in full, but he still wouldn’t let me go, instead he physically grabbed my suitcase out of the cab.  This was completely ridiculous as I needed to catch a bus to my next destination.   I then went up to the reception desk while they called someone, (the owner), and finally got it straightened out – so I thought. Back I went down to the street to catch my cab and get to the bus before it left.  Yet again the front desk clerk accosts me, this time about a restaurant bill.   I explained again that I had just payed that bill this morning with my breakfast, but the restaurant manager was away across the street getting groceries, so the staff insisted that I wait while they sort it out.. Atthat point I was about search out the local number for the Tourist police, but finally their guy came and confirmed that indeed I had paid, and I made my escape from the hell hole.

Jodhpur is known as the Blue City, because the Brahmans who inhabited it used to colour their houses blue. 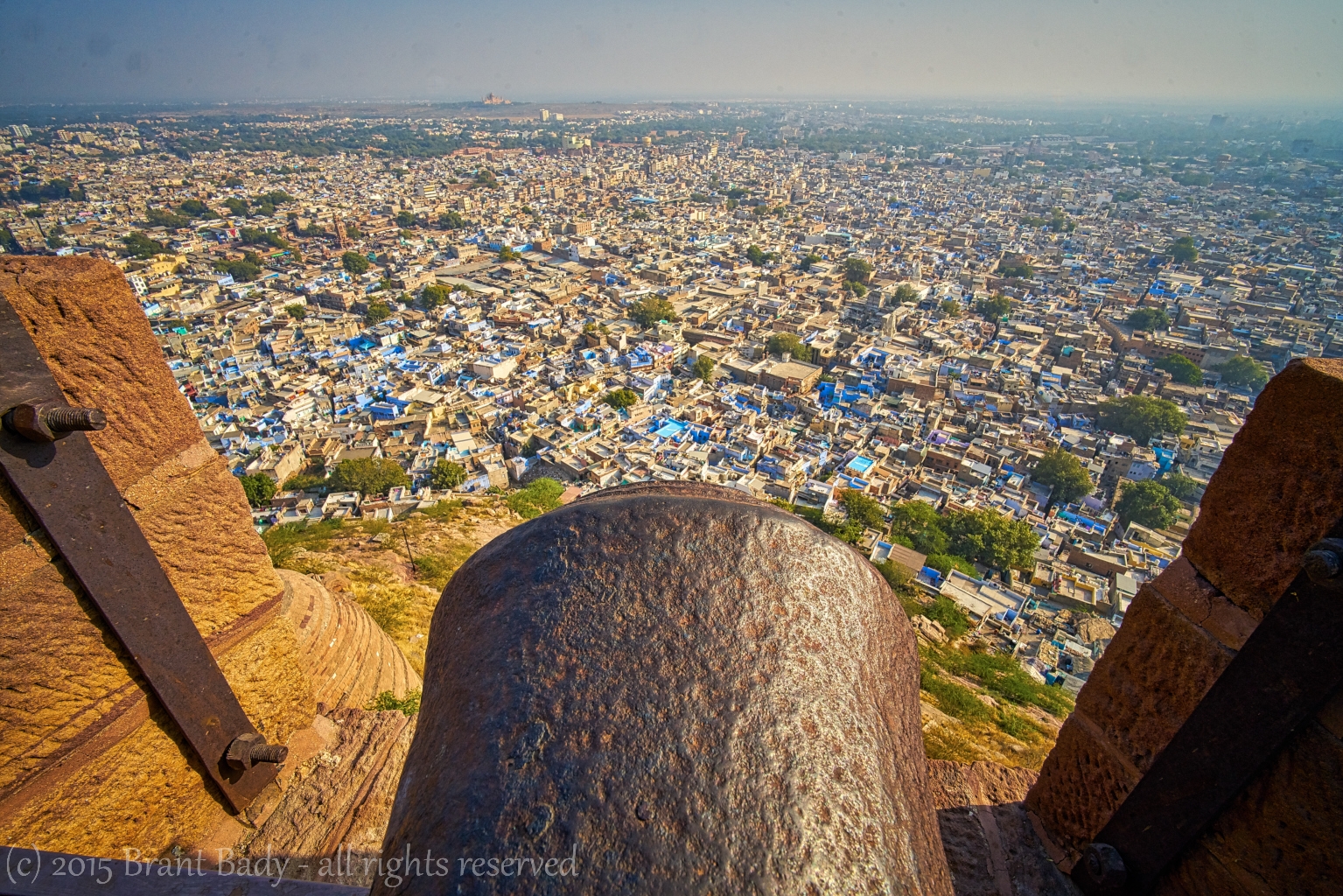 Vertigo – Walls of the Fort 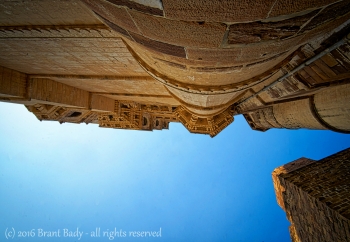 View of the Market, with the Fort in the background 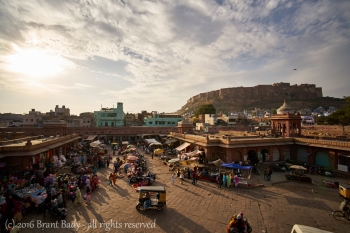 Entertainers at the Fort 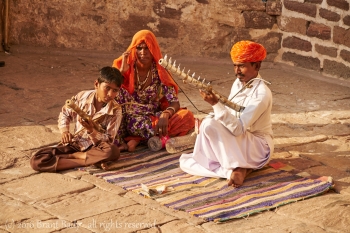 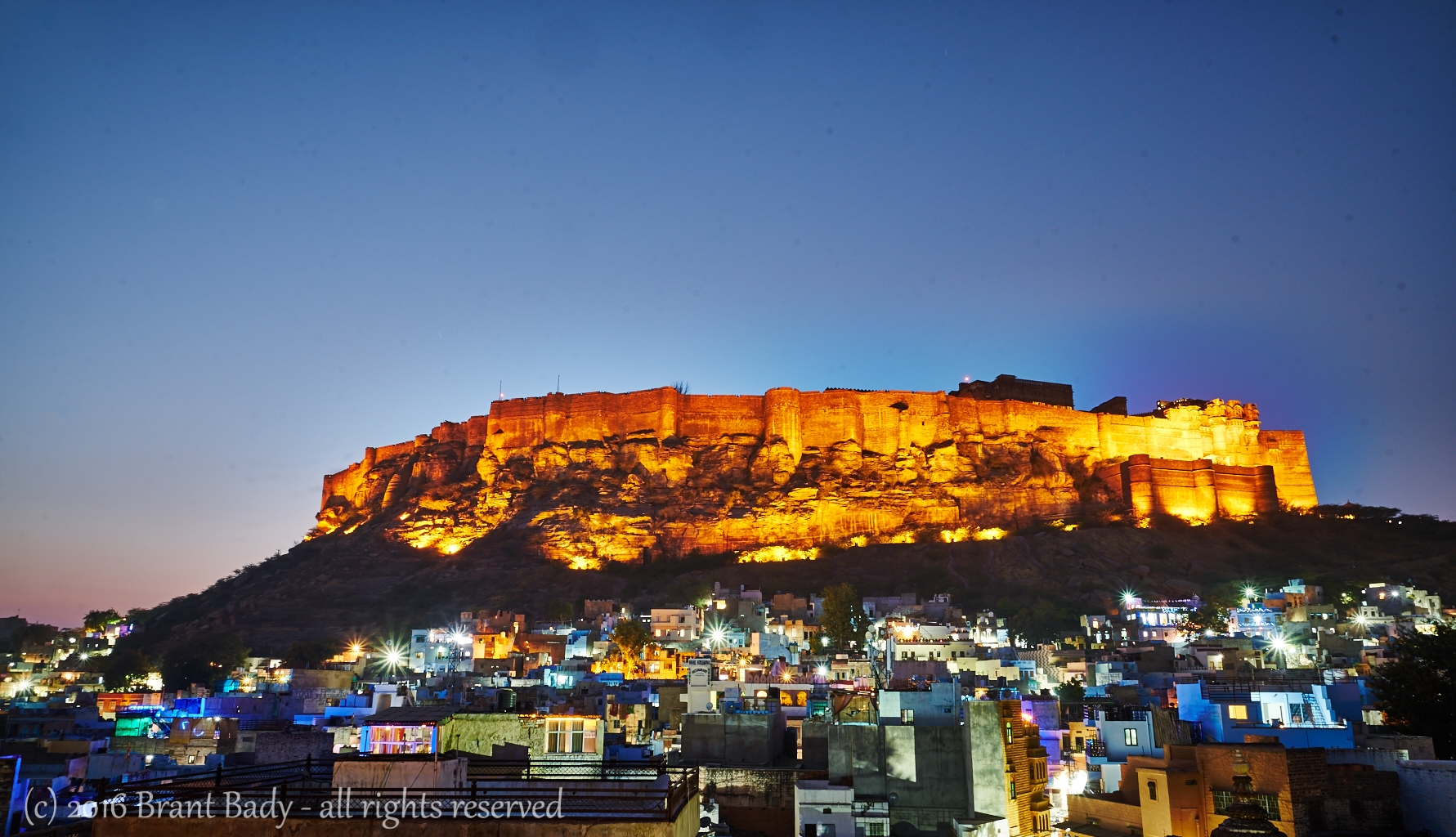