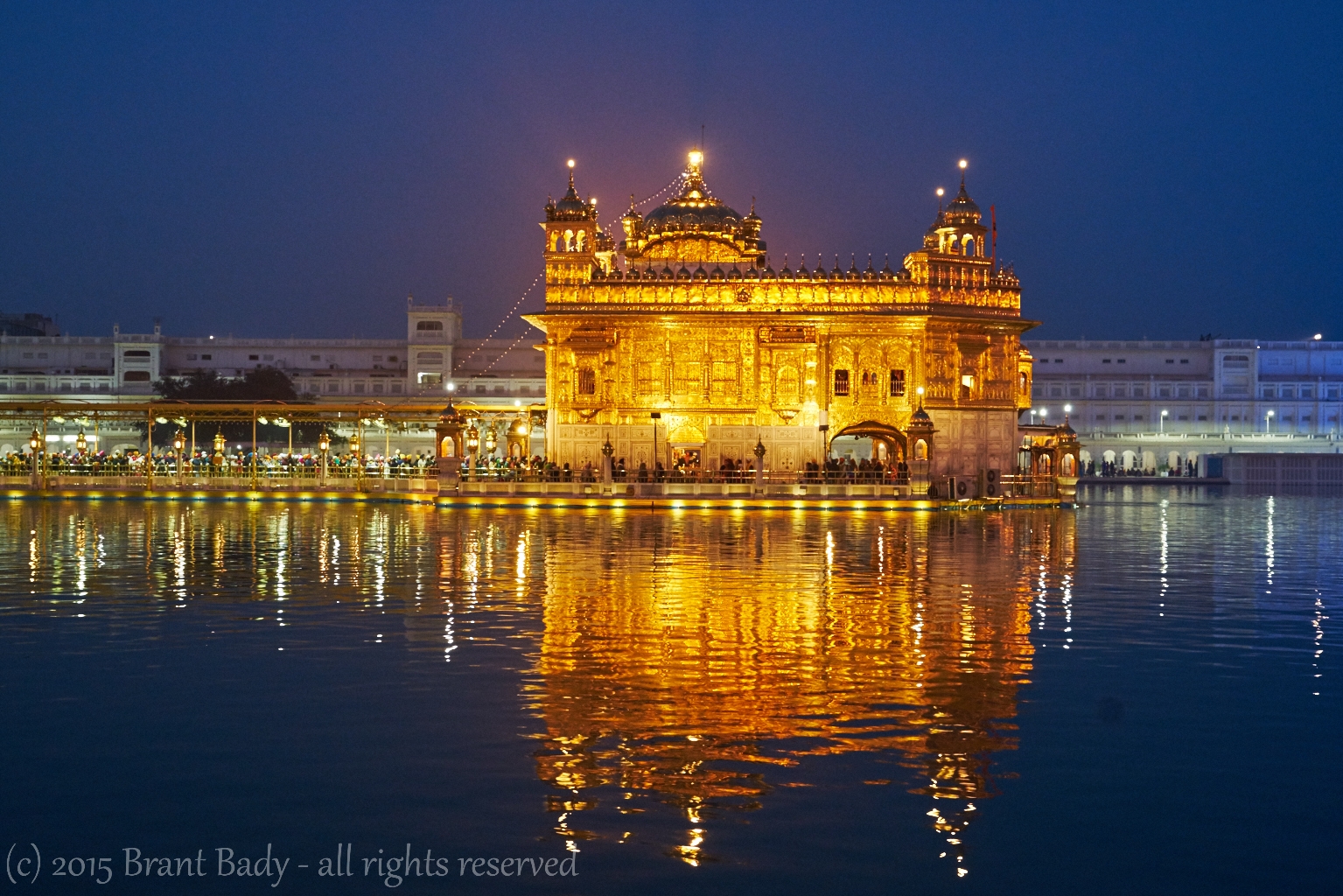 Santa Claus is Coming to Town

One of the more amusing sights on my bus trip from Dharamshala to Amritsar was the Santa Claus Parade that I came across in one of the small towns that the local bus transited through, and I photographed through the bus window as we weren’t stopping in this part of town.

I am guessing that this event wasn’t due to a high percentage of those with Christian beliefs living in this particular area (although there are some states in India where there are), but more about having an excuse for a celebration, and some fun for the local children. It came complete with numerous people decked out in red suits and white beards, with tractors instead of reindeer, and with tuktuks/auto-rickshaws to boot. As far as I could tell, everyone was having great fun, so I give them A+ for effort. 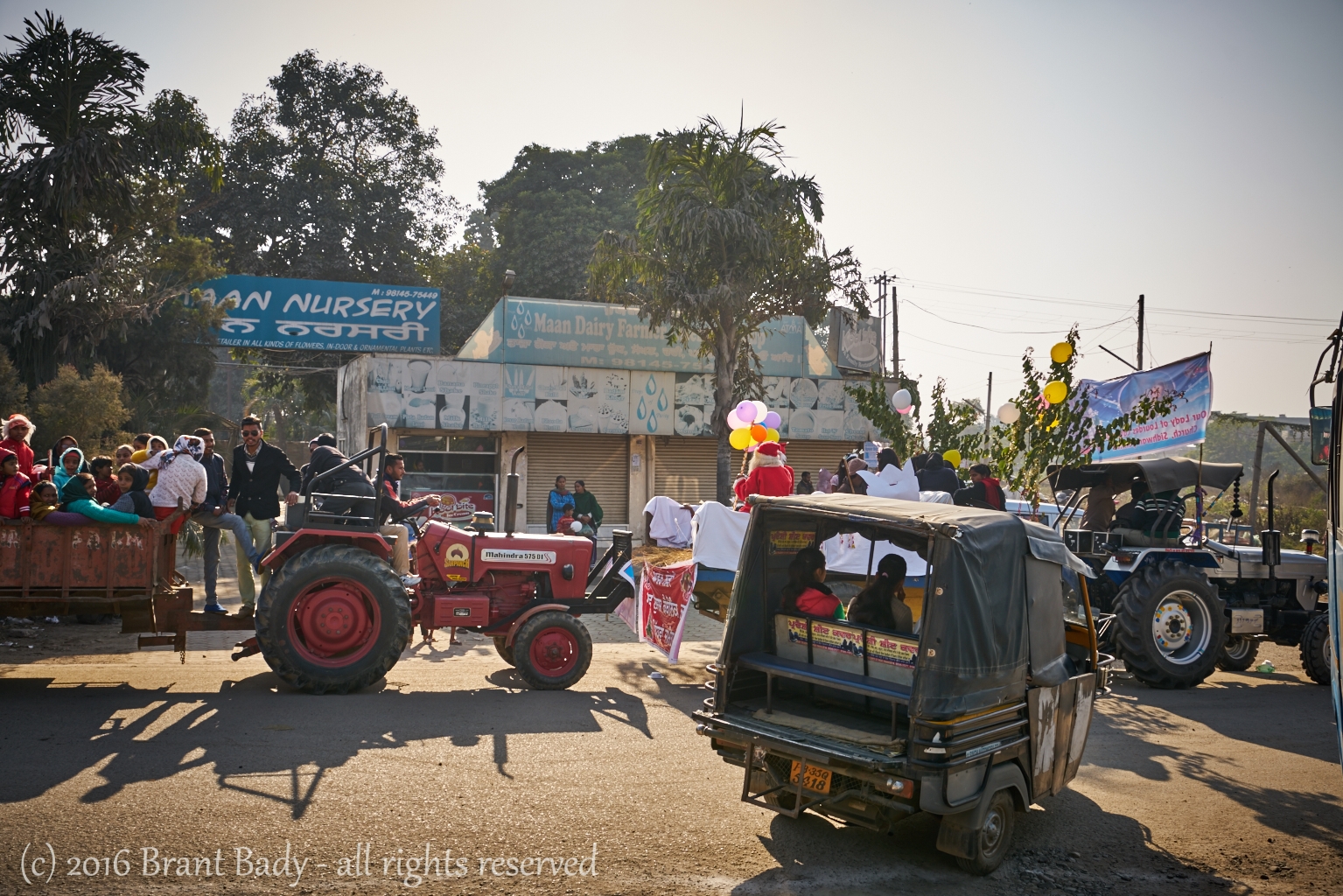 Amritsar and the Golden Temple

So Amritsar.. the city of the famed Golden Temple, which is a very very sacred place for Sikh’s.  My hotel was literally steps from the Golden Temple complex, so it was no problem to go over many times and catch the changing light for photography.

One of the aspects that most impressed me was learning that the whole complex is open to EVERYONE, regardless of the background, status or religious beliefs.  The only requirements to entry are to cover one’s head (cloths bandanas are provided for free), to remove your shoes thereby going barefoot, and to wash your feet in a shallow pool a few inches deep before entering the actual complex. 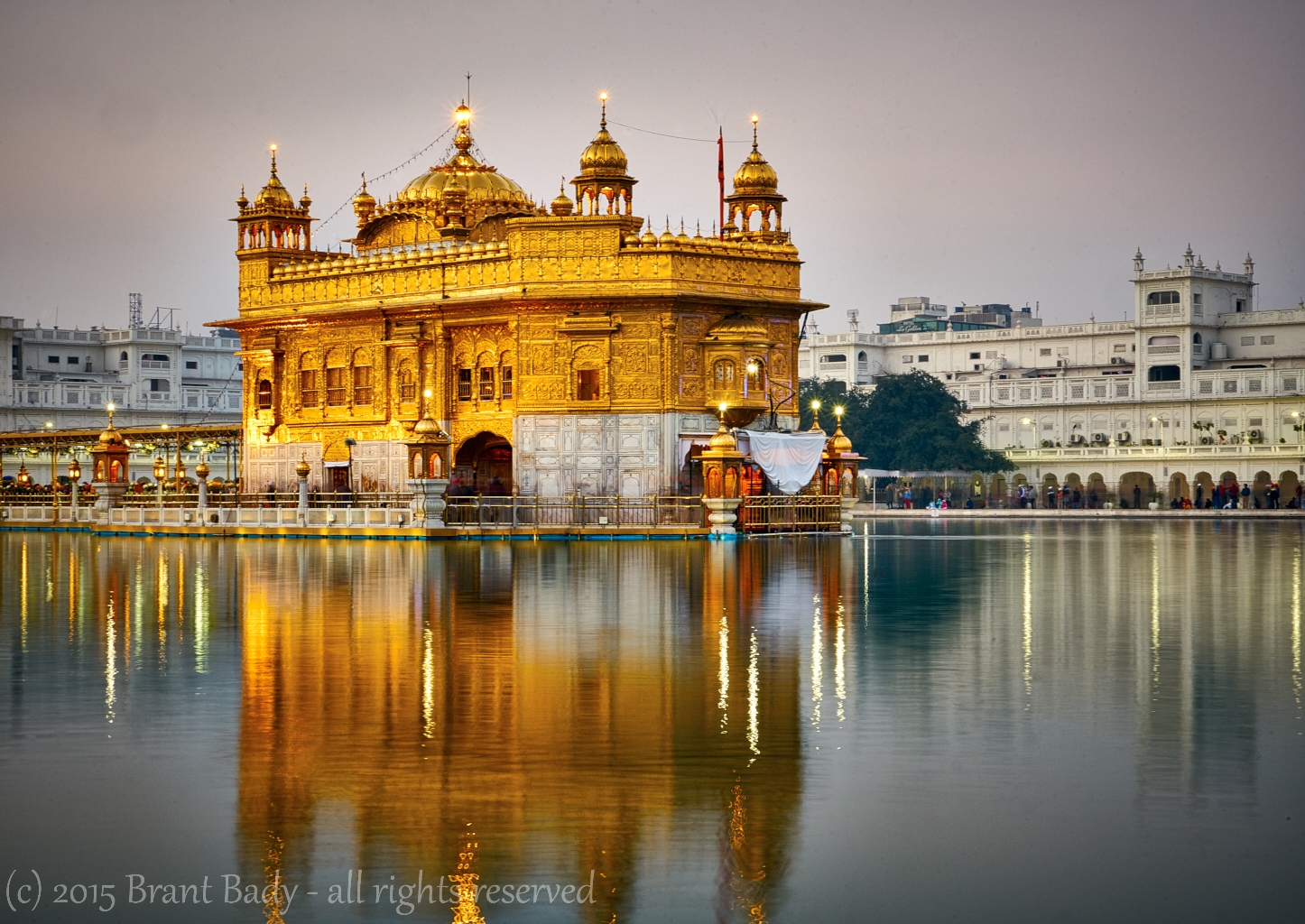 The golden temple complex itself is breathtakingly beautiful, and has an aura of serenity about it, even though it is quite crowded with devotees, even well into the night (the complex is open 24 hrs a day). 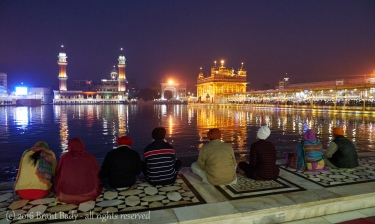 The marble promenades which are filled with people strolling around the complex or stopping for prayers, are mostly separated from the center temple by a large pool of water, that is complete with both fish, and bathers undertaking their ablutions.

My favorite shot in Amritsar, which I have titled “Dawn Destroys the Night”, Golden Temple Complex, Amritsar, and with a nod to the historical meaning of some aspects of the site, I gave it the subtitle of “Fish in The Pool of Nectar, amid the Splendors of Golden Temples and Marble Promenades above them”.

Its a bit difficult to see with this low resolution image online, but in fact but you can read the inscription in the marble in the center foreground and its sharp all the way back to infinity in this shot, due to the use of an ultra-wide lens set at its hyperfocal distance.

The center golden temple however dominates everyone’s attention, not only by its glittering gold surfaces, accentuated by some carefully positioned lighting, but it is also a concentration of people, devotees who come to pray and to participate in some of the ceremonies, such as the twice daily Palki Sahib ceremony, in which the holy book Guru Granth Sahib is moved back and forth from the temple to its nightly resting place, amid much chanting, prayers, reciting of hymns, blowing of trumpets.

A Golden Temple picture postcard type of shot, at bit past dusk..

Amritsar has many more notable temples and historical sights, but the most impressive by far is the Golden Temple complex, and it is literally embedded in the center of the city – making a somewhat startling contrast between its marble and gold against the backdrop of poor neighborhoods immediately adjacent.

Long Distance View of the Golden Temple and the City from Gurudwara Baba Atal Sahib (the highest building in Amritsar, ) 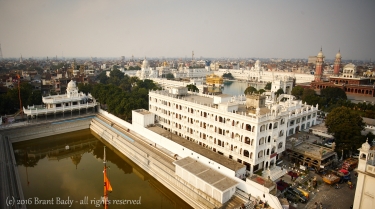 Since the center of the city here is considered holy, so there is nothing but vegetarian food.   While I certainly didn’t travel all the way to India to eat western fast food, In fact while there were a few western fast foods chains established here, like Mcdonalds, Pizza Hut, Dominos and Subway, all of them had apparently exclusively vegetarian menus.   Alas, neither was there any beer or other alcohol available in the center core.  However the Honeybadger was not to be deterred on either getting a non-veg meal, nor a beer.   It was a fairly trivial process to just grab an auto-rickshaw to venture out and and get both. I found a great Indian restaurant outside the core that was clearly at the higher end in terms of price and its clientele, and enjoyed a wonderful regional curry dish and a beer on the side – just in case – to help mitigate any heat from the spices.

The biggest eatery in all of Amritsar is at the Golden Temple complex itself, as they have a free kitchen, called a “langar” in Punjabi which is open to all.   This facility  feeds 100,000 people daily on average, often double that amount on weekends, making it one of the largest free kitchens in all of the world.   On a daily basis it serves volumes of food whose ingredients measure in the thousands of kilograms, prepared by a staff of over 450 people and supplemented by hundreds of additional of volunteers, and the cost is covered by donations received from all around the world.

The Most Dangerous Border in the World

One of my new buddies from the photo tour that I had taken to Agra etc. was from the Punjab region, had he been kind enough to list few of the must see sights for me to take in when I was in the area. One of which he suggested, was that I do a trip to the border of India and Pakistan for the special border closing ceremony at Wagah, whereby as dusk approaches, the border security guards (soldiers) from each side try to outdo each other in marching and drill routines in front of huge crowds who cheer them on.  Finally, the flags are lowered simultaneously as the border is closed down.

So far I had pretty much bypassed the normal tourist infrastructure systems in India, but this turned out to be an exception.  By word of mouth, I had found a shop down an alleyway that advertised it arranged tours to the Wagah Border, and I confirmed the time and location for the next day pickup.  The border ceremony itself starts at about 4:30 pm, so you need to be leaving Amritsar by about 2:30 pm at the latest in order to get there, get through the security, and get a decent vantage point to watch.  The operator I had chosen, basically blew all these factors.  We didn’t leave until nearly 3:30 as they were waiting to find more people to fill the mini-van, so we arrived at the border late, the ceremony was already half over, and it took quite a while to get through the security (noting that there are different lines for foreigners and VIP’s compared to regular people).  It was very crowded, as the ceremony is not only very popular with tourists , by far the largest component are Indians and Pakistani’s on each of their respective border sides.  I was lucky only by virtue of being late, to get a decent viewing space at road level, but it took some maneuvering and prodding of the crowd control / security staff to get even a basic unobstructed view.  I was lucky to get this good of a shot although it barely gives you a sense of the spectacle. 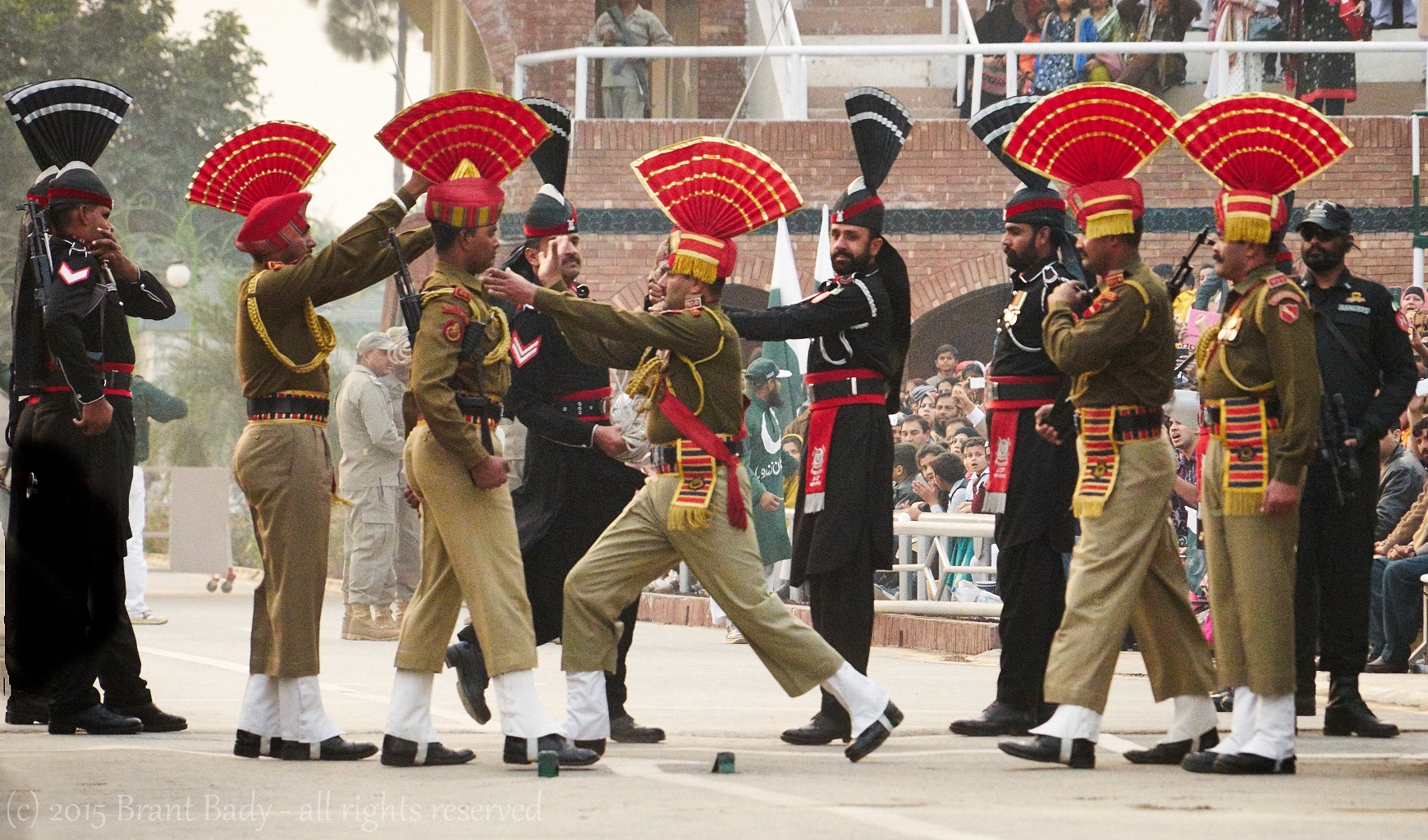 Titling this image  the “Strutting of the Peacocks” trivializes just how dangerous this border really is…. India and Pakistan have been at conflict (both active and passive) since partition took place in 1947, with hundreds of thousands dead over this period which included the prosecuting of three active wars.   Positions between the two have hardened even further over time, and there continues to be periodic cross border incursions (one of which happened just a few weeks after I had been in the area), but of critical significance is that both sides possess nuclear weapons.  India espouses a “no first use policy”, Pakistan does not, and recent reports indicate that Pakistan has deployed lower yield “tactical” nuclear weapons along the border, which would be used directly on the battleground, say for example if the Pakistani army was being overwhelmed in a battle (it has a much smaller military than India).  Such use against India would almost certainly trigger India’s use of strategic nuclear weapons in response against Pakistani population centers, and such an incident could have worldwide implications.

My own departure from Amritsar proved to be a particularly bad choice in transport, as it turned out to be one of the most uncomfortable trips I have ever had the displeasure to experience in all my travels around the world!