Returning from the excursion to Agra and nearby areas, back to New Delhi, I did have a couple of days to start to explore the Capital. I was staying in the Pahar Ganj or Main Bazaar area in Delhi, which turned out to be not a bad area to be based from – it was certainly not way out in the outskirts of town, and transportation wise it was easy to hail a cab, and metro station was nearby as well. Main Bazaar road consists of many shops, primarily selling clothing, with a few hotels scattered around along with the odd restaurant. Timing wise there were some parades and celebrations going on in the area, which tended to clog the street, but certainly added to the ambience from my point of view. 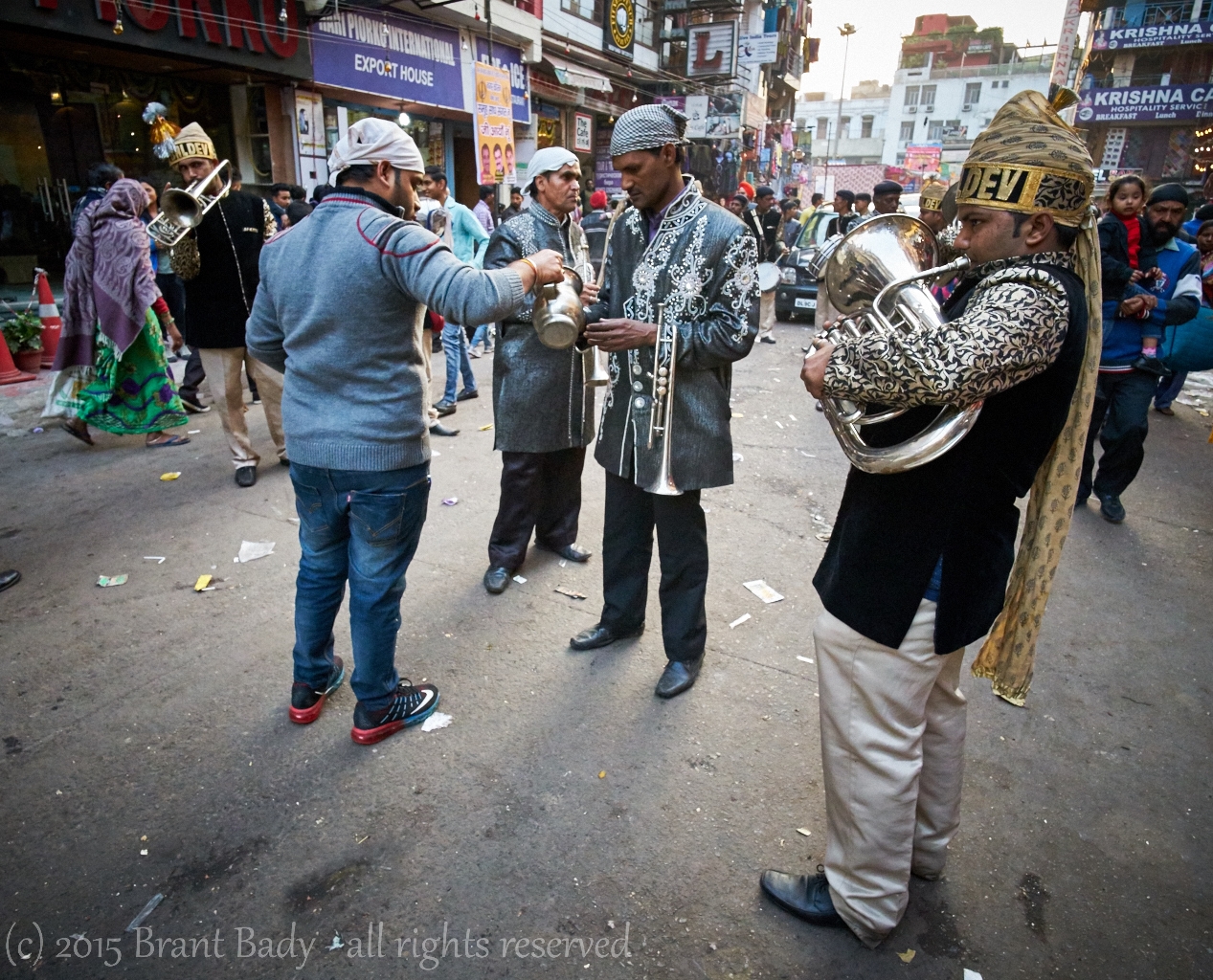 The parades also added to the opportunity for pickpockets however. The next morning at breakfast in my hotel, one of the other guests was complaining about how his mobile phone had been lifted while he was in the street outside watching the parades. In my case, no one was lurking or shadowing me, and I took my usual precautions – e.g. camera gear secure and clipped onto me, disposable “bait wallet” in my back pocket, real wallet in my front pocket buried underneath an awkward rubber “rocket blower” used to remove dust from lenses.

One of my newly made friends in India had suggested that I use the Metro (Subway) in order to get out to the airport for my next trip leg in order to save money on cab fare, but I was reluctant to try that without knowing what I would be getting myself into in terms of managing luggage etc. My second day provided a perfect opportunity to test out this idea, as I decided to try to figure out navigating the metro to get myself to and from one of the more popular monuments in town, the Red Fort. While it turned out to be fairly manageable in terms of figuring out routes and how things worked, it was much less appropriate due to the crush of humanity – I wound up being pressed, elbowed and even inadvertently carried out of a metro car due to the flow of people. Certainly NOT appropriate for moving around with luggage, even if the bags are small.

Just walking along the road in Delhi down to the Red Fort after the metro station was a mind blower, dirt roads, crushing traffic, a layer of garbage everywhere, and touts after you like hounds after a rabbit. Thankfully the Red Fort wasn’t too crowded, and seemed like an oasis of calm once inside. 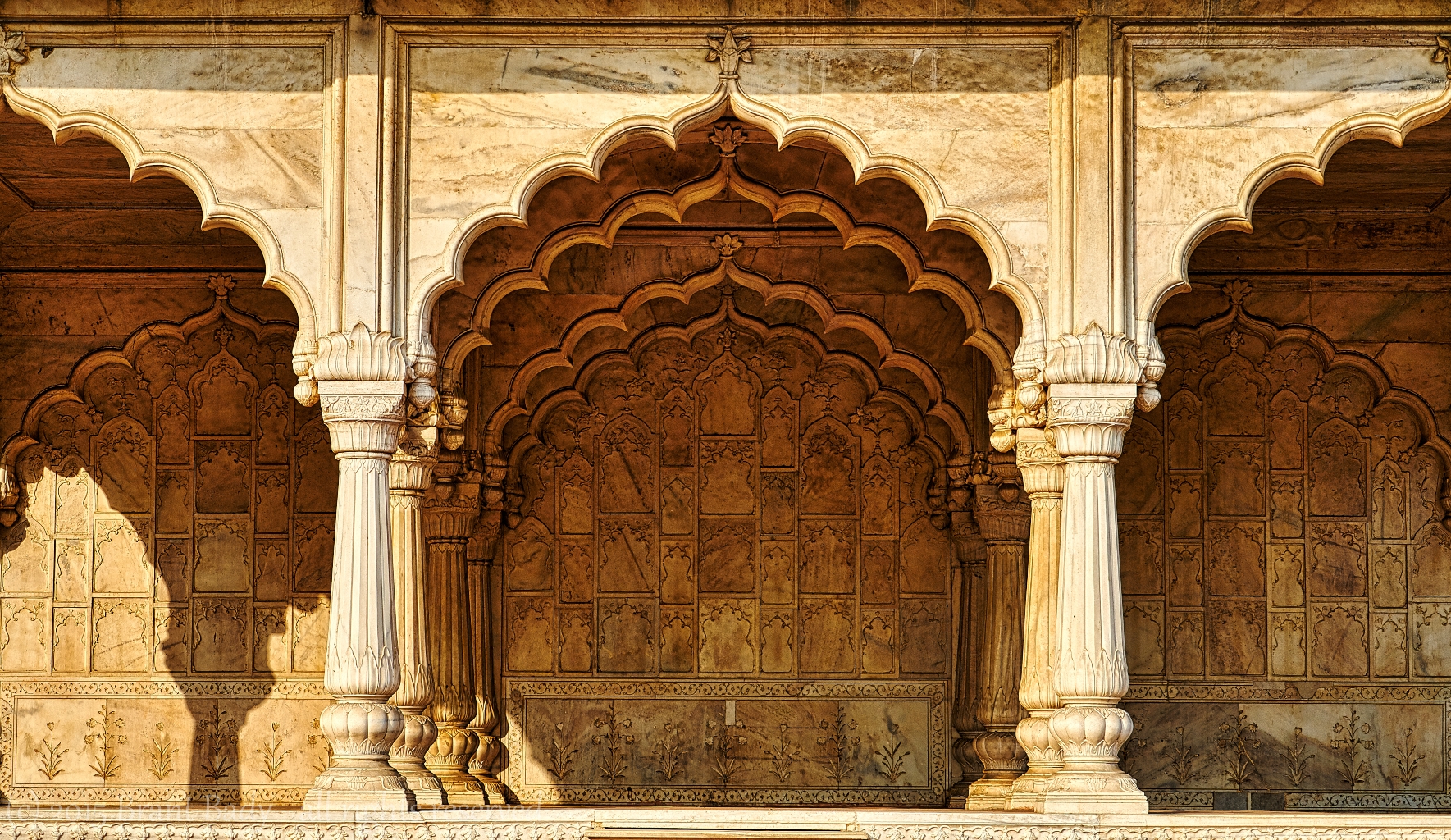 Thoughts on Safety in India

In three and a half months, I never felt once at ease in India in terms of safety, “except” while riding on buses on the highways on a couple of occasions when the driving got a bit crazy. I was traveling on my own 95% of the time, and had no qualms about walking the streets of both major cities and small towns, even after dark. I would literally dive in head first to markets, narrow alleyways, monuments and parks when out shooting photographs or just exploring in general. That is not to say that I didn’t receive quite a lot of unsolicited advice from locals – they were pretty eagle eyed at spotting and telling me if my top loader camera bag was not fully zipped up. Obviously my being male does make personal safety an easier task to manage. In India there are frequently bus seats, metro seats and sometimes even train car sections that are reserved for women only, so that they have less fear of being groped or molested, and its not uncommon to see taxi’s with signs advertising that they “respect women”.

In my hotel, I would leave any gear unneeded for the moment, locked up in a larger camera backpack, the one I would use to hold all my valuables, including my Macbook. Not trusting hotel room security is a wise policy, and few rooms had an in room safe, which would be too small to hold my valuables anyways, so I employed a stainless steel mesh cover bag from Paksafe that would enclose my camera backpack, and had a large cable which I could use to loop through furniture to make it less possible to carry off. I also employ a portable cable lock to further tie things up, if the cable to the lock is cut a 100 decibel alarm will sound off, and it has a button to enable the motion sensing alarm as well. If the bag is disturbed the alarm sounds off right away. This arrangement would not likely protect from a determined thief who had a few tools, but it certainly would create a commotion due to the alarm noise, and it goes a long way towards avoiding opportunistic theft.

Generally I try to do my best NOT to stand out. When moving around carrying camera gear but not actually shooting, I used a small fold up back pack that I had sprayed with paint to make it look particularly grotty, it would hold and hide camera bag, a water bottle and a few photo accessories with ease. However my supposed cloak of invisibility, practice of moving around incognito, was totally compromised and thrown out the door when I accepted a very nice photographer’s safari vest from my friends at Indian Photo Tours. While it was very practical to wear while shooting because it had a ton of pockets that could hold things like spare batteries, small lenses, cleaning equipment, a tiny folding tripod etc.. It was anything but discrete – the darn safari vest had SONY emblazoned on the back in huge letters.

Everywhere I went, locals would assume that I worked for Sony Corporation, and that either I was scouting locations or people. People would walk up out of the blue and ask me to take their photograph, or pose with them for a selfie on their mobile, or just engage me in conversation about where I was from, and what I thought of India etc. It actually was starting to get to be an impediment to taking my own photographs, but the vest proved to be invaluable in keeping me warm, as this was northern India in the winter time, and it could get quite cool. I didn’t have a lot of warm clothes with me, so the extra layer around my core really helped, particularly when I went up north to Dharamshala, and then latter on when I was on the overnight bus trip through hell frozen over (Amritsar to Bikaner).

My “Audience” with the Dalai Lama

Dharamshala’s claim to fame is that this is where the exiled government of Tibet relocated to flee oppression from China. McLeod Ganj is a suburb of Dharamsala, where in fact the Dalai Lama has his residence, and his monastery, the Tsuglagkhang Complex is immediately adjacent and is the largest Tibetan temple outside Tibet.

My first thought was how generous and enlightened it was for the Indian government to let a huge influx of Tibetan people, a whole foreign government in fact, and its spiritual head to set up shop on territory in India. However, there might also be an element of regional geo-politics going on here, as it would seem that China and India act as competitors in the region, certainly in terms of political influence. For example, China gave Pakistan the technology for nuclear weapons so that it could act as an effective foil against India which already had the bomb. In turn, India hosts the Tibetan government etc. in order to potentially irritate China.

I arrived in McLeod Ganj December 16th, and it was cold, and I was suffering from a massive head cold that I had picked up from my roommate on the photo tour to Agra. Luckily, my hotel room had a portable heater in it (something that you cannot count on having available at many of the hotels and guesthouses there). A lot of my time was spent huddling in front of the heater in my room – particularly in between taking long exposures at night from my balcony, as I had a superb view of the lights of the town nestled in the mountain peaks, with star trails in the sky behind.

Photography Note: Far too much dynamic range for even a Sony camera to capture in a single shot, i.e. starlight to sodium vapor streetlights. Composite of three different long exposures. 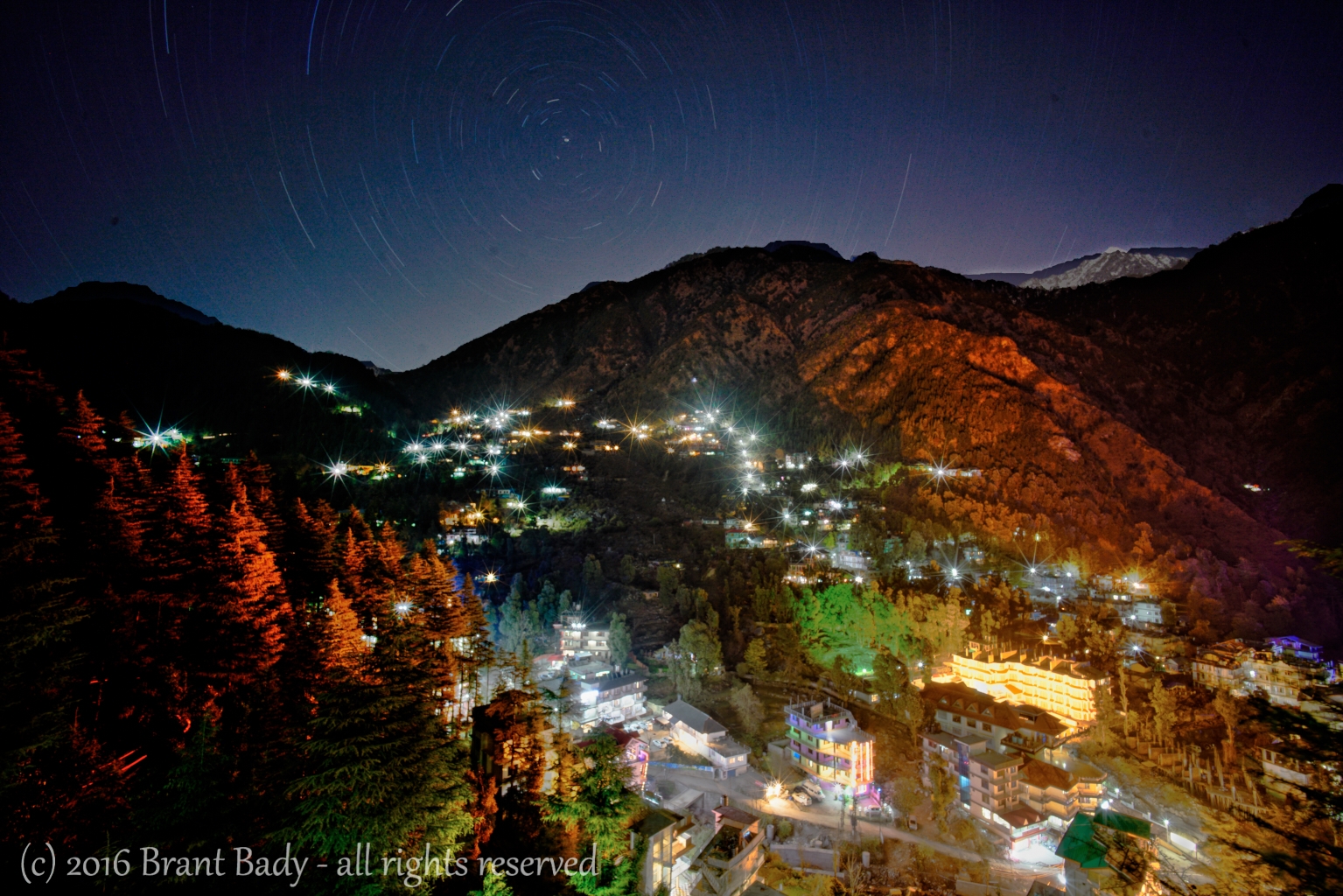 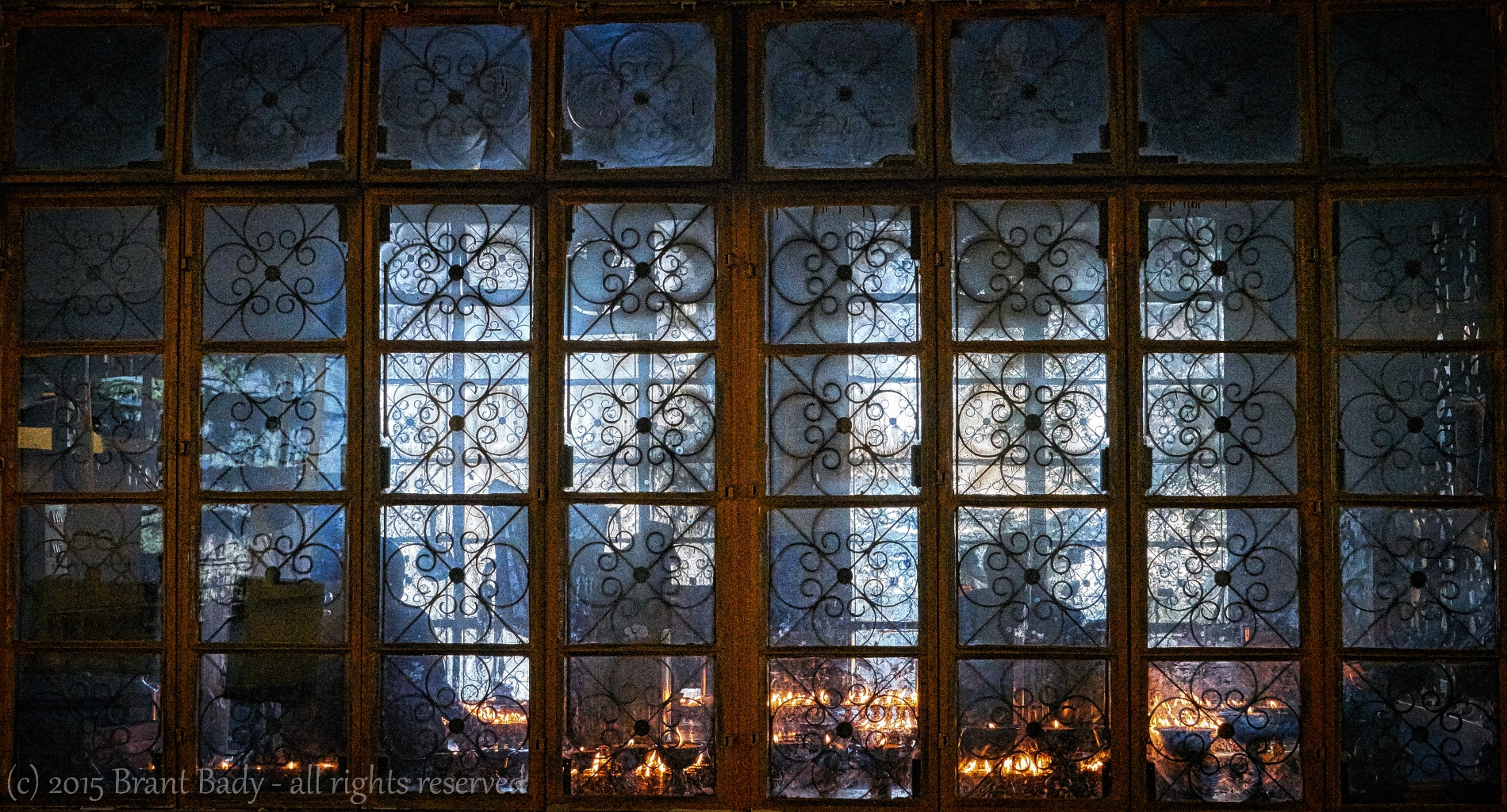 So about that “audience” with the Dalai Lama byline, think of it this way, every tapestry – no matter how perfect – should have at least one flaw purposely woven in.. and in this case, every tale of adventure, should have at least one tiny token embellishment – otherwise one might be accused of not trying hard enough. Now that we have that issue of “interpretation” put to rest, and I have come clean on the only white lie I ever tell, the details are in fact that while it is indeed “possible” in some unique circumstances to get an audience, its not particularly “probable”, and in my case, I was spared the grief of having to explain to his holiness that although I think Buddhism is a great and ideal way in which to live a life, why in fact I was such a terrible Buddhist in practice.

His holiness was not in residence when I was in the area. He was in fact much further south in India for the month of December with a full schedule of obligations. I am sure his sojourn to the south was coincidental to it being so darn cold in Dharamshala.

My own escape from Dharamshala was by local bus, but it took quite a lot of pressing the hotel staff to tease out the details as to when a bus going in the correct direction might be leaving, my next destination was another city of huge religious significance – the holy city of Amritsar, home to the famous Golden Temple (Harmandir Sahib) and effectively the spiritual and cultural center of the Sikh religion!