My next major objective was a Tiger Safari that had been pre-booked with fixed dates, for Ranthambhore National park.. but that was still a few days away, and I needed to get closer, so my next stop was to be Udaipur, with a side trip to Kumbhalgarh, which boasts a huge fort that is definitely worth seeing!

A very popular destination for tourists because of the interconnected system of lakes, and historic palaces and other architecture, Udaipur is also home to some of the most expensive and luxurious hotels in all of India! 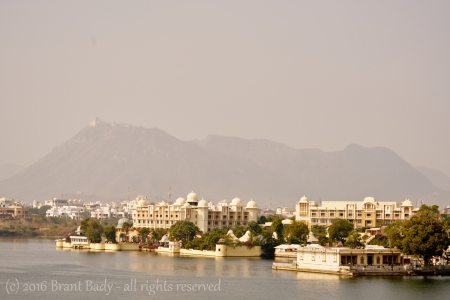 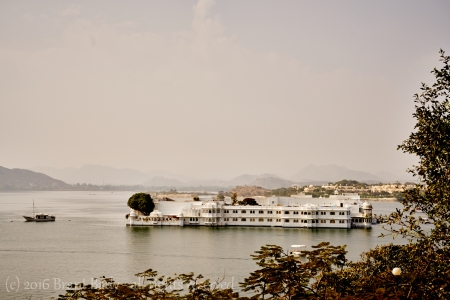 Wall Mural of the God Ganesh in Palace 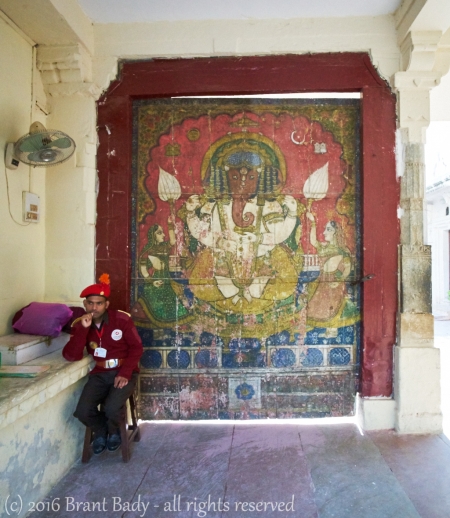 While the palaces were interesting (although difficult to photograph due to restrictions), I wandered a number of the neighborhoods to get a better sense as to how the locals lived, and found a number of subjects for photographs.

“The Intensity of Waiting” 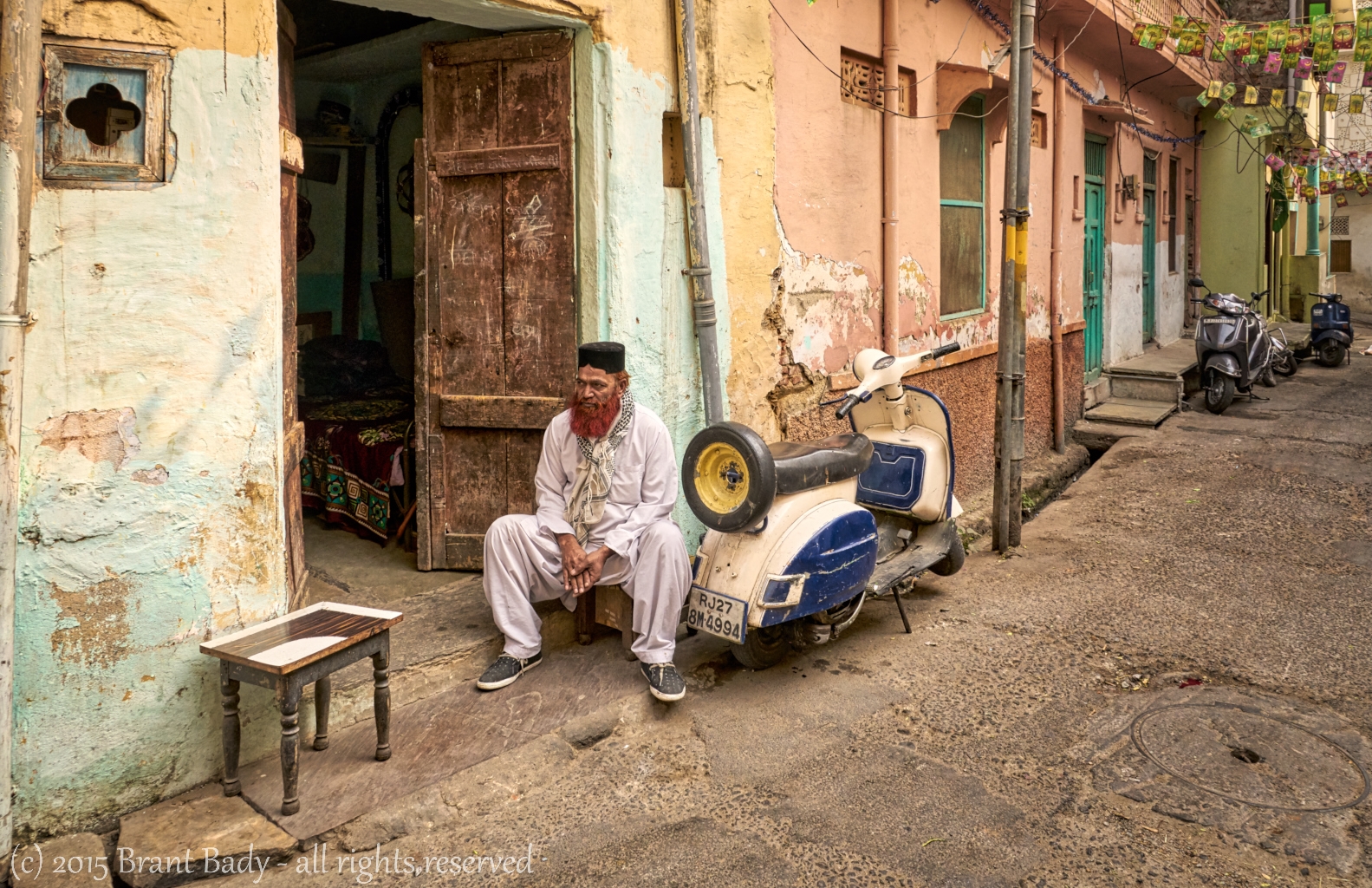 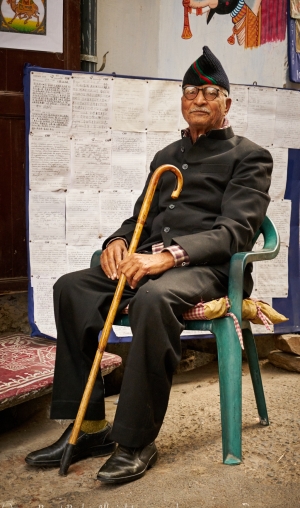 This gentlemen and his pal were sitting outside a shop as I was strolling by with my camera in hand.  The friend wanted me to come in and look at his goods, if I recollect it was artwork, but I only sat down and chatted with them for a few minutes.  The dapper gentlemen was a retired policeman, I think he said he was in his eighties now, and was clearly very proud of his career.  I had a bit of a chuckle when I noticed his walking cane, it had a metal tip reminiscent of the metal tipped sticks that most policemen in India still carry and use for crowd control or otherwise pacifying unruly people.  Old habits die hard I guess.

Just one of Kumbhalgarh’s claim to fame is that the wall around the fort is the second longest in the whole world, the Great Wall of China being longer.  It is also a UNESCO world heritage site, which typically means you can’t go wrong spending some time at any place receiving that designation. 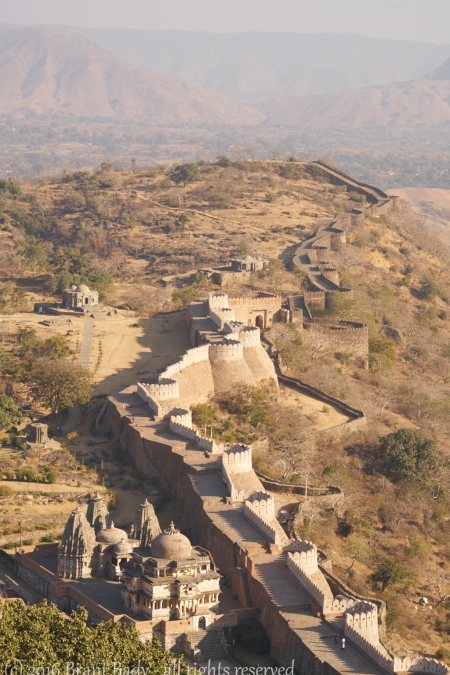 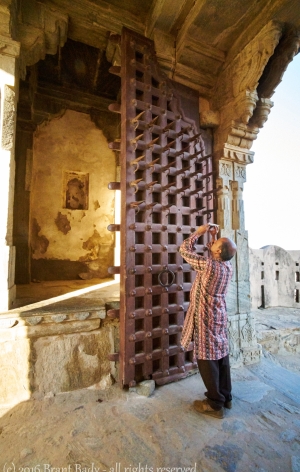 You will take note that the spikes on the heavy door are all mounted at the height of an Asian Elephant’s head.

My hotel here at Kumbhalgarh – Royal Kumbhalgarh Villas – was quite nice, a step up from the usual that I had been booking, I had a huge room with a decadent round bed!  What really impressed me though was the Chef in the restaurant – he really knew how to prepare food.  The portion sizes were small but the taste was superb – Chicken Kadai was my favorite dish there!  I even got invited into the back kitchen to pass on in person my compliments to the Chef and his staff.

View of Kumbhalgarh Fort from Inside a Temple 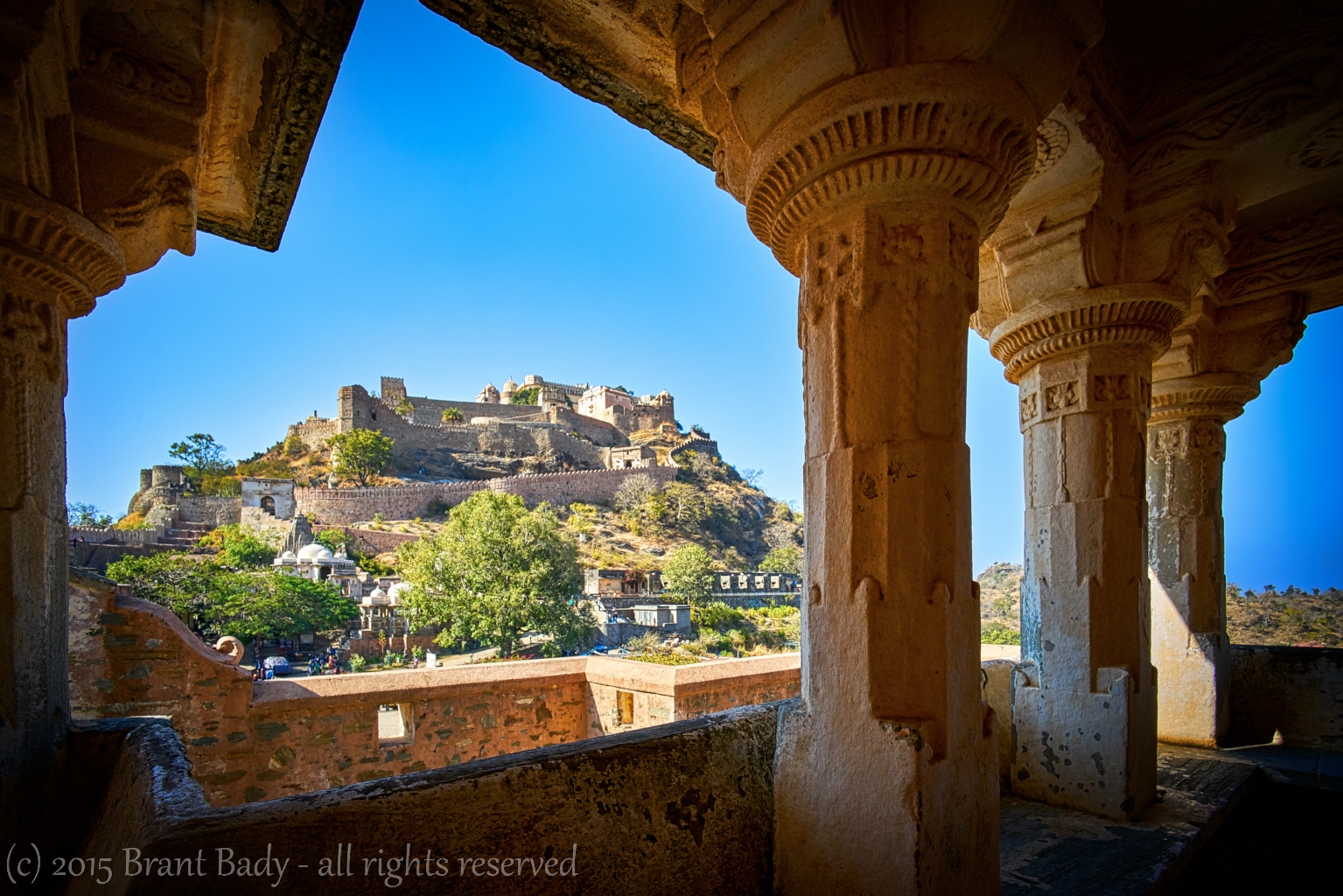 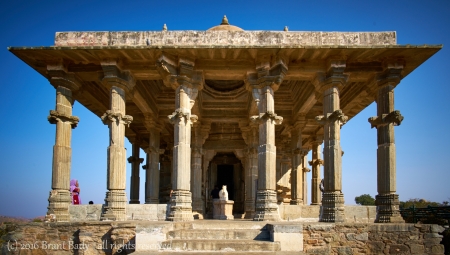 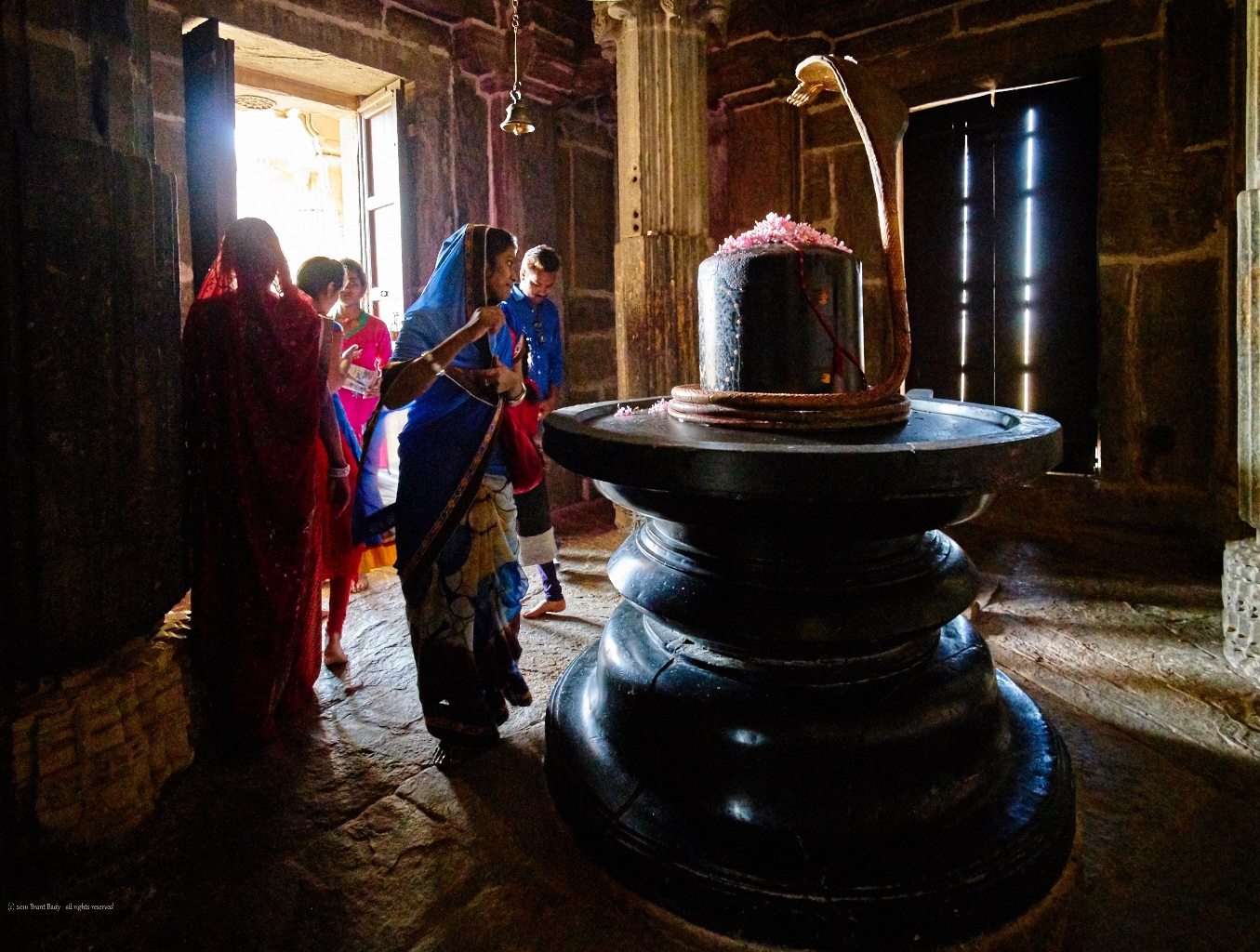 “Worker Carrying Lumber up to the Fort” 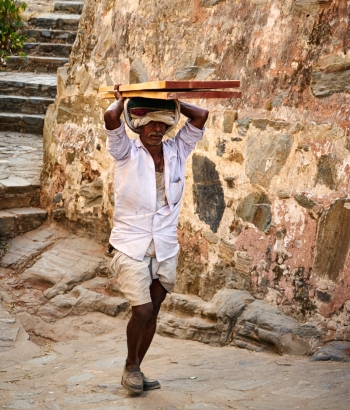 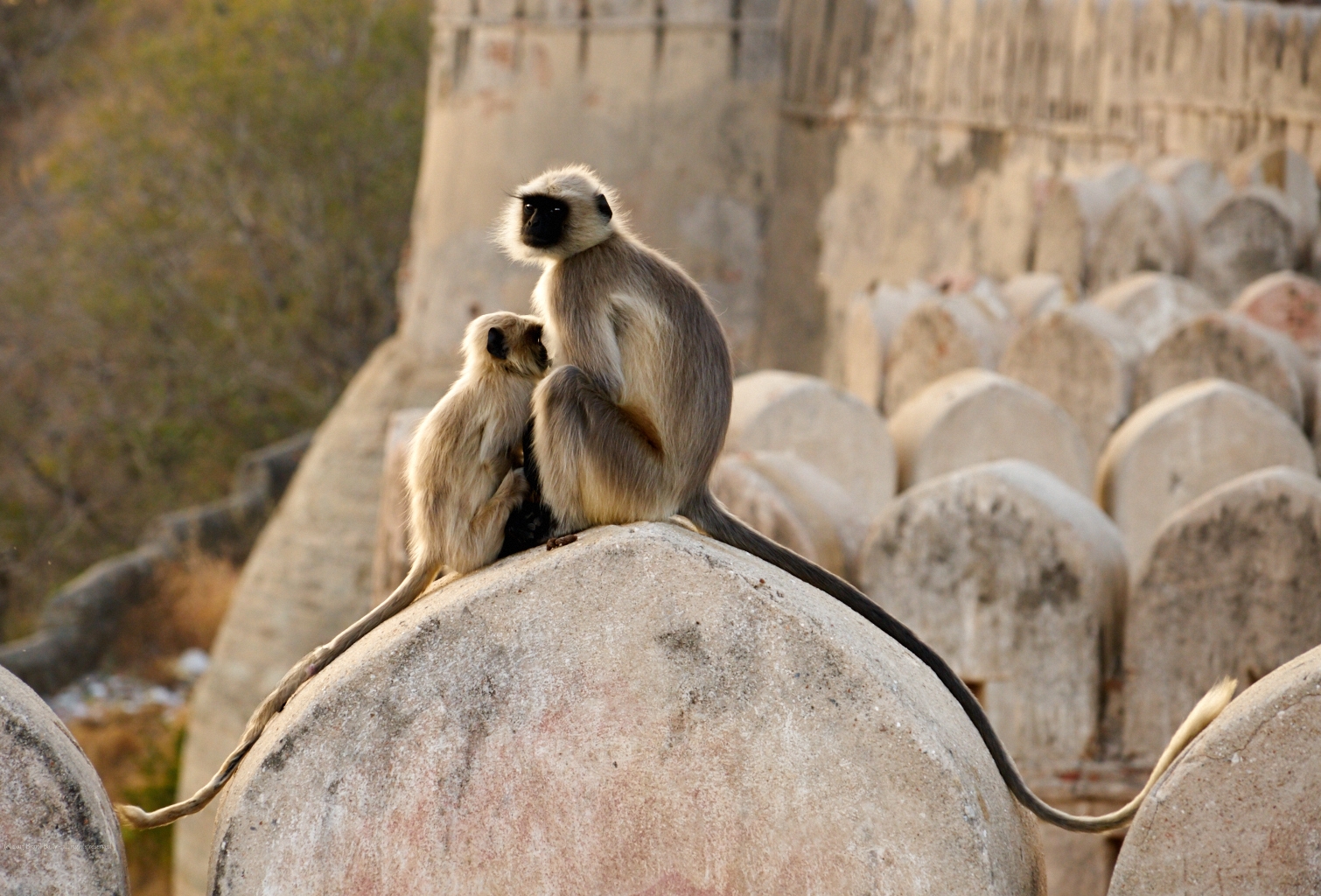 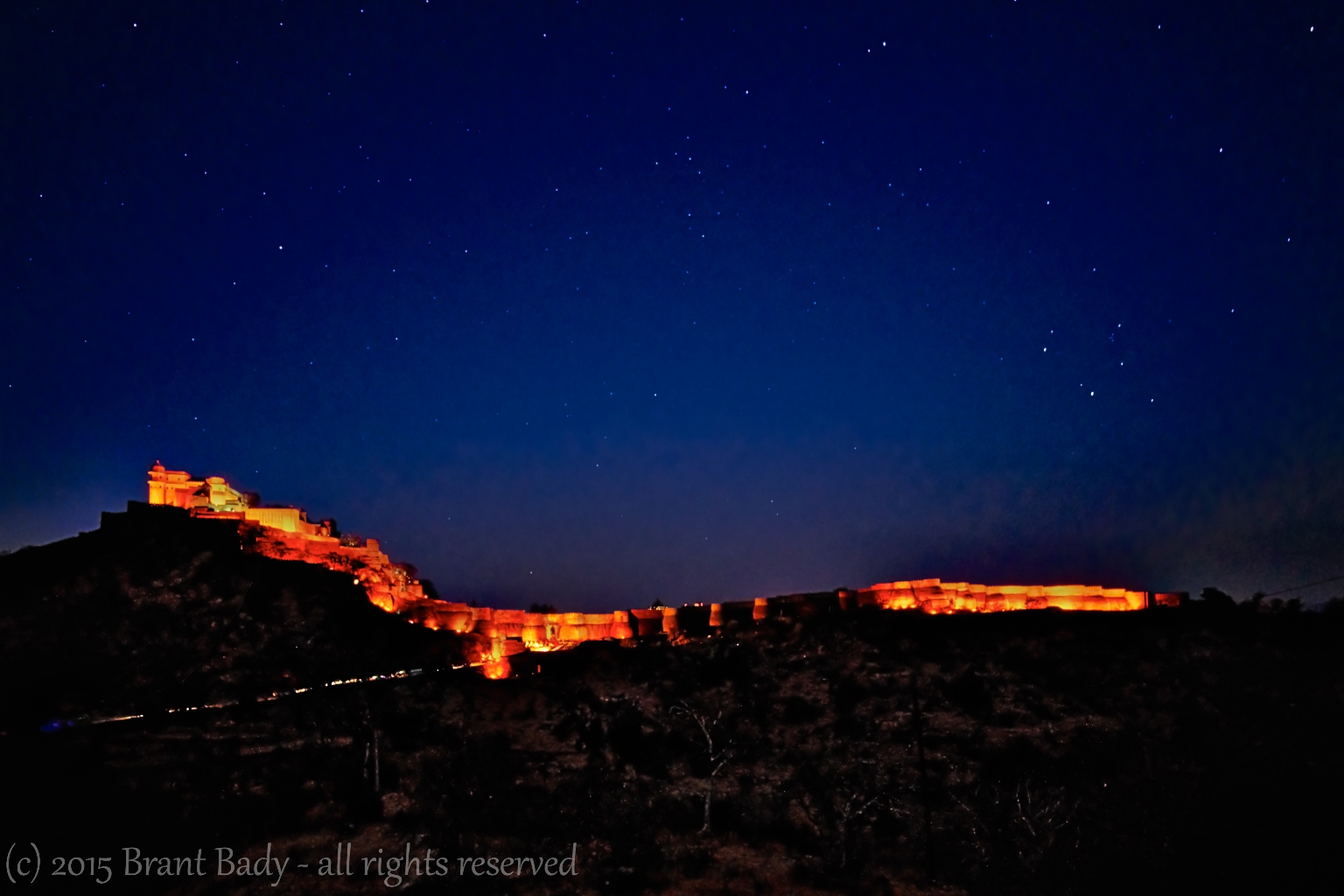 Unlike the Fort at Jaisalmer, Kumbhalgarh Fort has a light and sound show at dusk each night, which means they don’t turn the lights on until after 7 pm.  By then is too dark to get a good photograph with just one frame (like this one).  In order to get any detail in the terrain and fort one has to resort to a composite of multiple frames taken at early dusk and a once it is dark.

I had also signed up for a morning safari out of here, but it was a total bust.  We didn’t see anything and I didn’t shoot a single frame – was this to be a foreshadow of my upcoming Tiger Safari at Ranthambhore?

Taking the “local” bus back to Udaipur, I learned that baby goats can ride for free!  This little guy kept himself amused on the trip by tasting all of the upholstery on the bus. 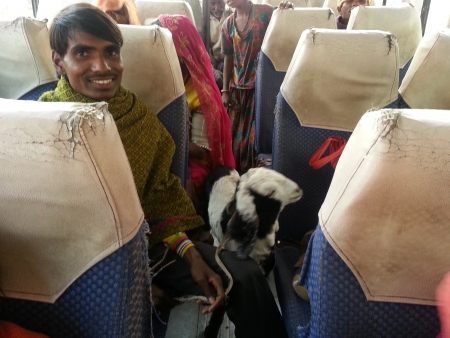