I actually had little or no choice in my method of getting to Hampi.  There was only an overnight train.  I actually wanted to do another train trip, in order to explore what first class would be like – compared to the other seating options I had taken previously.

The compartment itself was nice, similar to first class on trains that I had taken in Thailand, and initially I had it all to myself – but at one of the stops others got on – two Indian gentlemen, and at a later stop a female tourist from Europe. The Indian men were clearly Muslim by their attire and head gear.  There was also an “air” about one of them, and the other was quite deferential to the first. We had a bit of conversation about sorting out bag storage, and then we pretty much all became absorbed in our own devices (mobile phone, laptop etc.).

It wasn’t until later on that we actually got into an interesting conversation, about India, the British etc.  I had asked him what the general consensus was among the population about India being ruled by the British in the past. His response was in the vein that people typically felt that India had been used for its resources (something that I pointed out Canada, as another commonwealth colony, had similar experience in that specific regard, although definitely much less brutal in the rule received). He also pointed out that the British had been great at putting in administrative systems and processes, and that Indian’s after gaining their independence, had pretty much continued to follow them in the exact same way. Based on the range of topics we discussed, and his comments, it was clear that he was very educated and worldly. I began to suspect that there was a lot more to this guy than he was letting on, and that was pretty much confirmed the next morning when his “staff” came to meet him at the train and fetch his bags etc.

I reckon he was another Indian “prince” to the extent that his family background was from that environment, and still retained some semblance of privilege and respect, and likely some significant land holdings.  India, at the time of its independence, had 555 princely states. One of the ways of dealing with that, particularly in the vein of land reform, was to set rules about land ownership, whereby those royal or princely families were allowed to retain limited amounts of property, e.g. just one palace each, and other lands were intended to be distributed in order to make the minimum size more viable for the general populace. The process was not particularly smooth, and there are still a number of properties across the country that are contested. One unfortunate and likely unintended consequence, is that a number of the historical palaces were taken over by hotel chains, like Taj – whereby they have been commercialized so funds are available for the preservation and restoration of the property – but effectively it reduces or eliminates public access to these historical national treasures.

Hampi is famous for a number of 15th century temples and ruins sitting on hill tops. 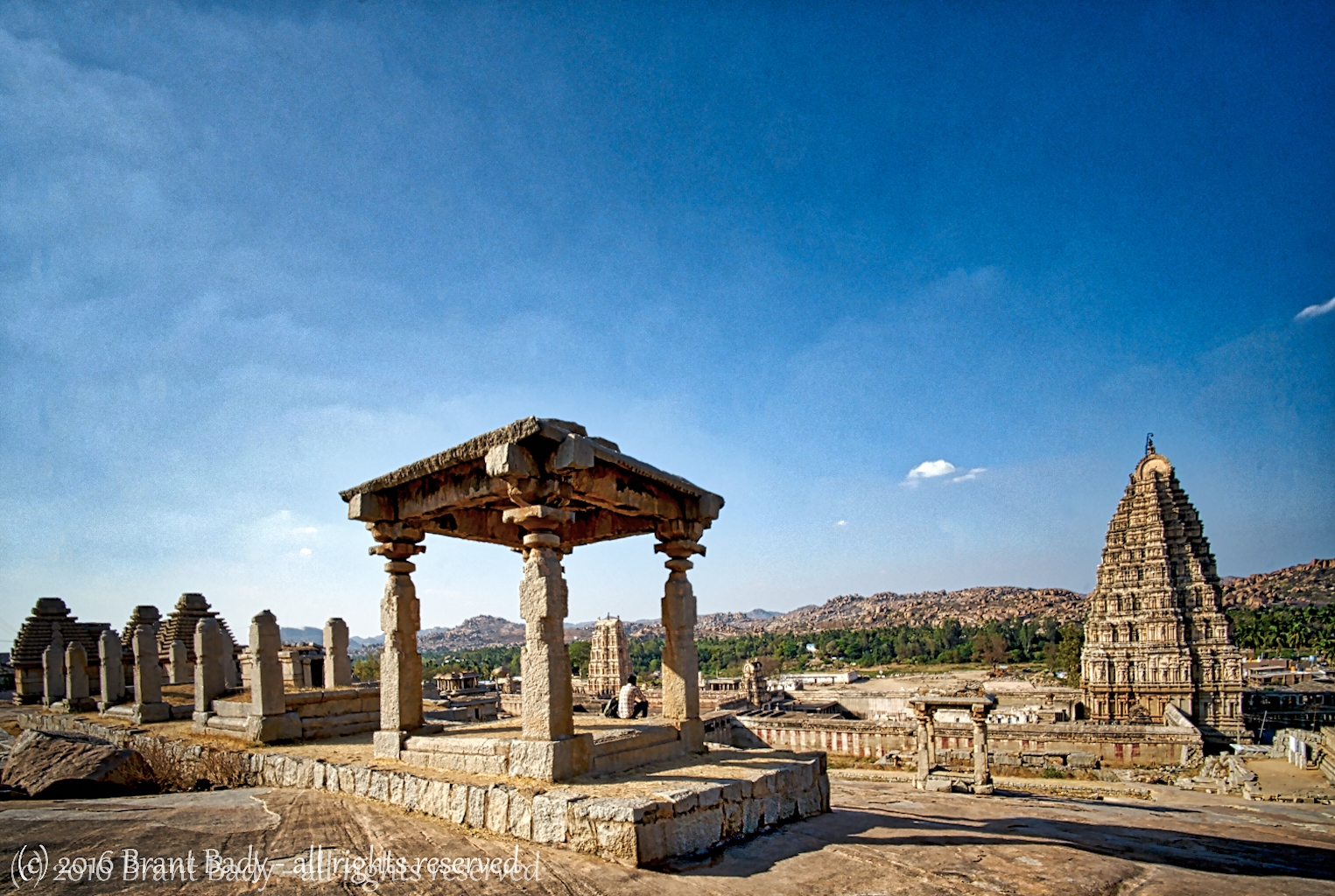 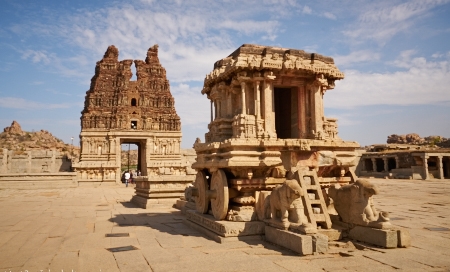 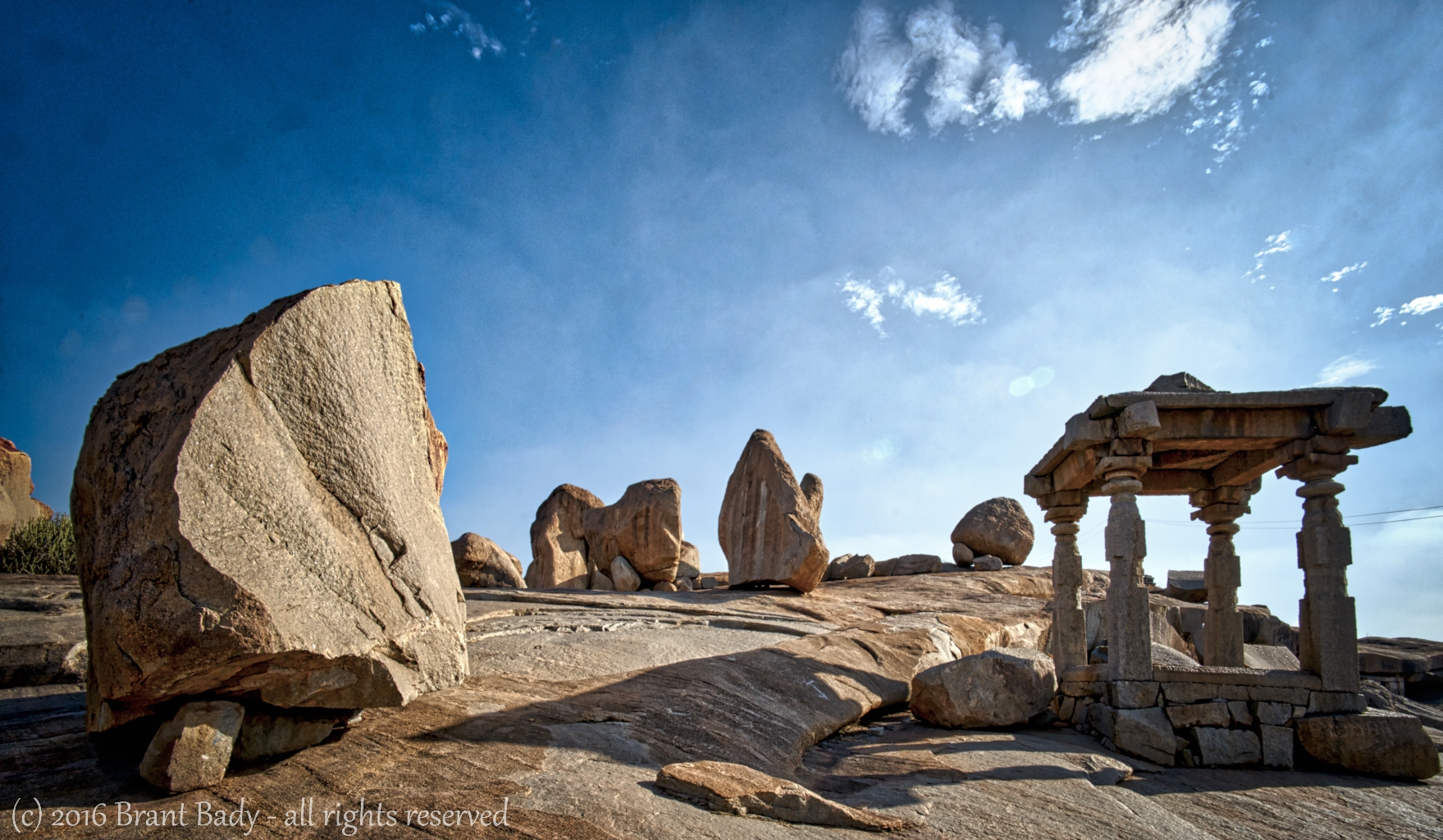 The terrain is a strange landscape of huge boulders that makes it look other-worldly. 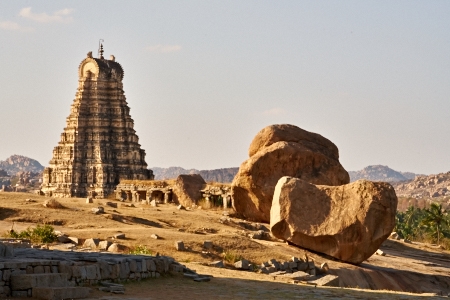 At one point it supported a huge population, and was one of the largest and richest cities in all the world at the time. It is in fact another UNESCO world heritage site, and is still considered a holy city. 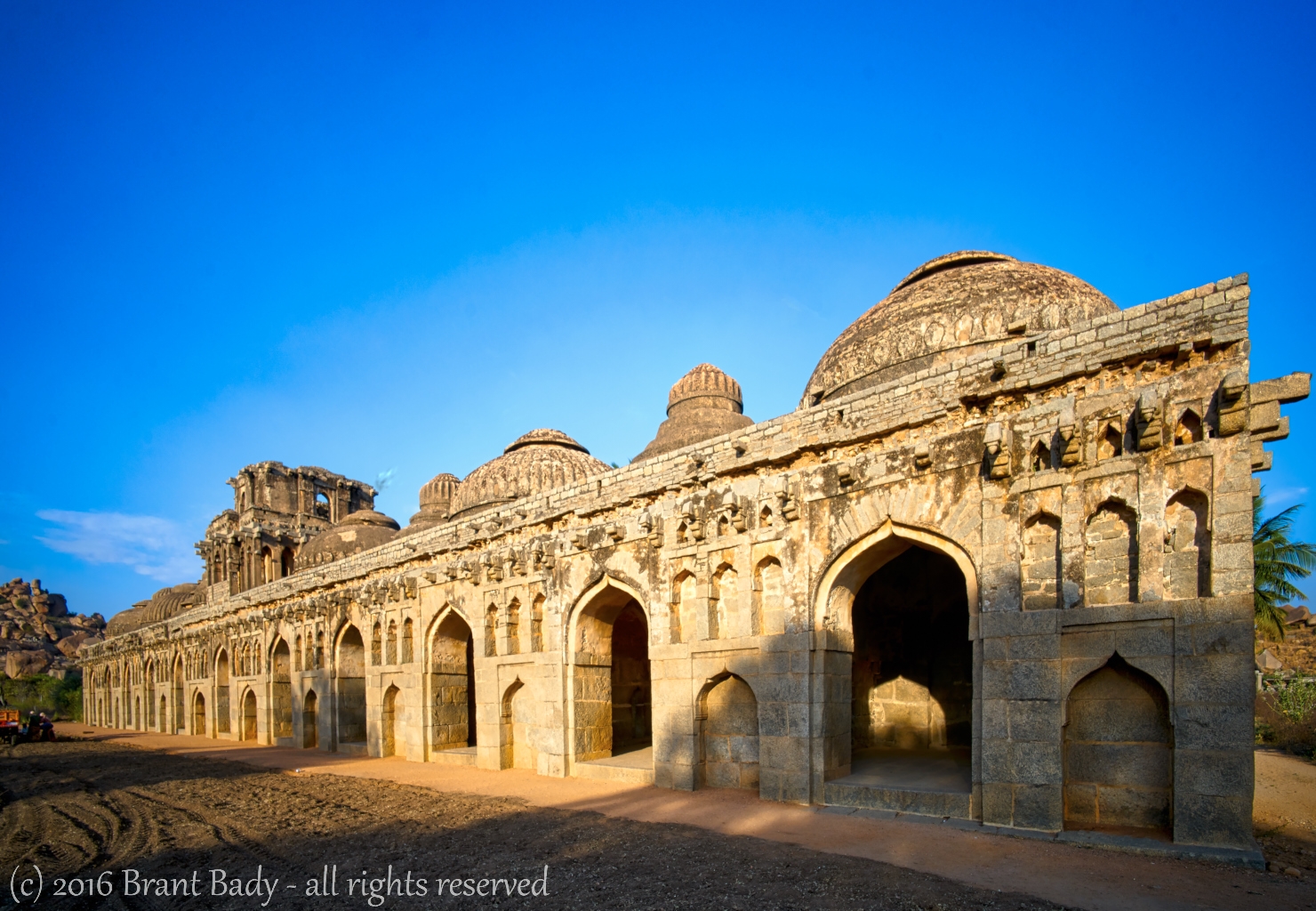 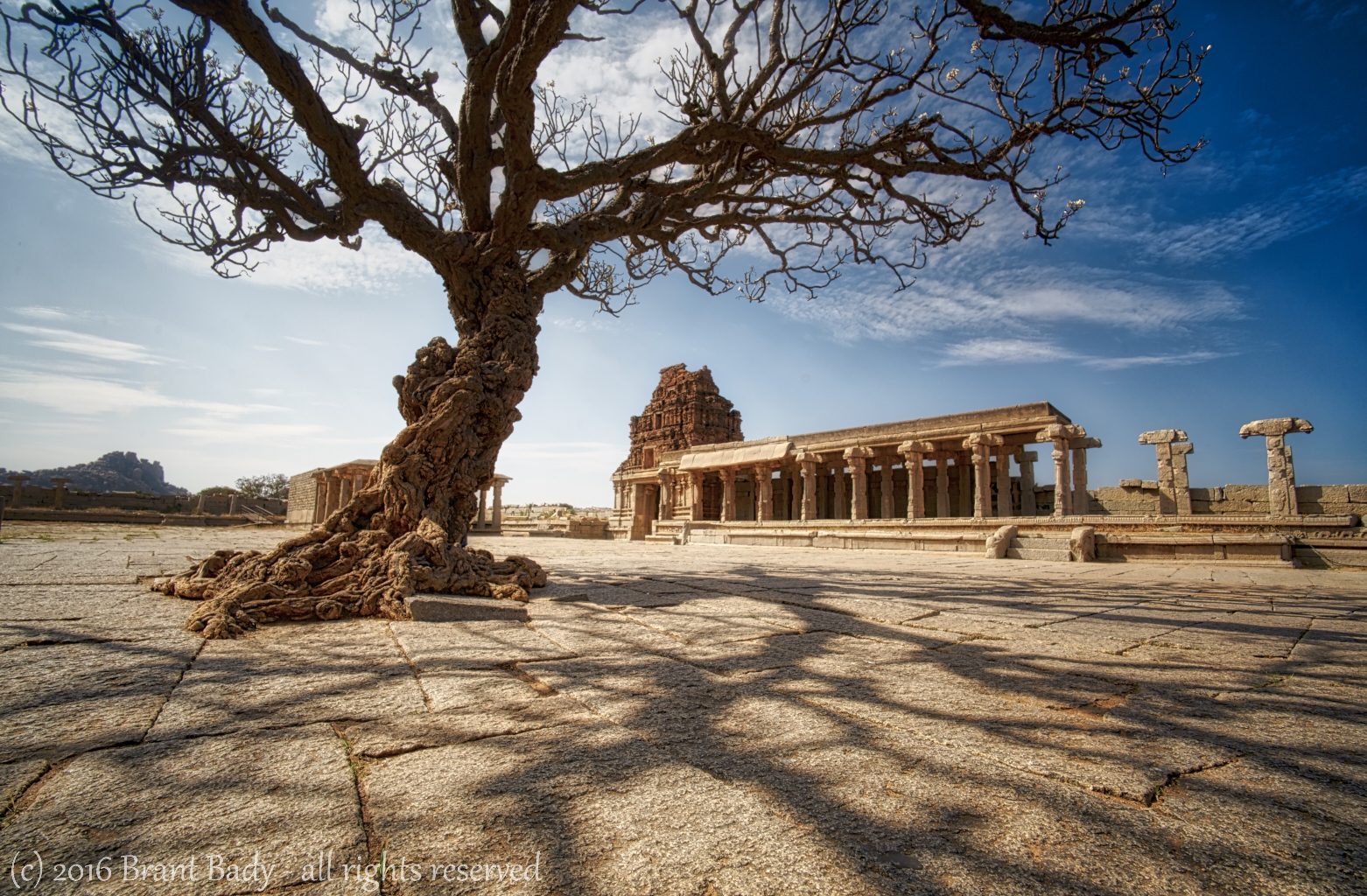 Unfortunately for me, Hampi, because its considered a holy city is also a dry town and a veg town to boot, unless you go across the river. But in a few selected places if you whisper, you can quietly get served and anonymous beer or cocktail, and one place even serves some of those special herbal green lassi drinks.. rumour has it..

So getting out of Hampi was going to be my very last train ride. Alas the train station is not in Hampi though, but is in Hosapete nearby about 15 km away. I switched hotels to Hosapete as the train was scheduled to depart at 6:30 am, and the hotel I booked was right in front of the train station. I duly presented myself at the train station at 6:00 am. But the train to Goa was delayed, by over two hours. I kept checking the electronic status board and my train never showed up on the board the whole time. I checked several times with the inquiry window and was advised that it was late but on its way, due at about 8:30 am. Strangely though another train arrived at that time, with a totally different train number. Having enough situational awareness I noticed all the other foreigners had migrated out to the platform, so I dashed out and asked one of the station staff and he said they had added the cars from my train to the end of this one. Surprisingly there was no notification of this, and the station staff had neglected to tell me at that the train number had been substituted.

It was just starting to pull away and so I started sprinting (with baggage) towards the end of the train. I got part way down and it was picking up serious speed, a quick glance showed me I wasn’t near my coach yet, and that they weren’t connected by a walkway. I made a split second decision and dove into another coach, first plunking my suitcase on the step and then trying to catch up and get myself in. Let me tell you this wasn’t the easiest thing to do, e.g. jump onto an accelerating train.. but I made it intact and unseparated from my gear. There was lots of yelling going on, and I reckon they realized that they screwed this up as the train decelerated then, stopped for a few moments, and I was then able to move myself and my bags down to the proper coach where my seat was reserved. The train was 4 hours late in arriving at the station in Goa. Sigh. This pretty much cinched my overall impression of trains in India – often far from ideal, but sometimes a necessary evil.