I was getting fat, luggage wise that is, particularly from all the spice packages I had purchased – my suitcase was almost bursting.  As I have done in many other countries, my plan was to go down to the post office in Hyderabad, and mail all my loot back to my home address.

A seemingly simple task, but I was about to run into the full benefit of Indian bureaucracy.  The counter for mailing parcels was closed for lunch when I first arrived, so I cooled my heels for a while waiting.  It wasn’t clear to me what the process was, so I didn’t mind that even though I had parked myself right at the counter, other customers just ignored me and started handing their boxes to the official behind the counter as soon as he came back.  I quickly figured out that I needed my stuff to be “inspected” and packed, because it was being sent out of country, so around the counter I went to the official responsible for that.   Except he was having none of it – as soon as he saw what I was mailing, and that it was going back to Canada, he firmly stated that it was all prohibited.  I attempted to explain to him to no avail that the spices in fact were permitted to be received in Canada, and especially when they were all pre-packaged commercial products.

So out of the post office I went muttering to myself, mission NOT accomplished.  Indian Postal System Score 1, Honeybadger Score 0.  A few weeks later I was transiting through Bangkok, and just mailed the spices home from the very useful Thai Post Office outlet at the main airport Suvarnabuhmi (pronounced Sue-wanna-poom). Sorry if I enticed you with a lurid headline, you have to remember, that I am Canadian, our idea of going “postal” i.e. loosing it, is to mutter, and then apologize.

Hyderabad is big, it’s the fourth largest city in India, and there are a number of interesting things to see, including a large fort (Golconda) with plenty of paths to walk along and explore the area. The second photo at the fort shows a fairly bizarre path, to get down it one literally had to slide down, as the tiles were very slippery, and the slope was very steep.  It was great fun for the kids though. 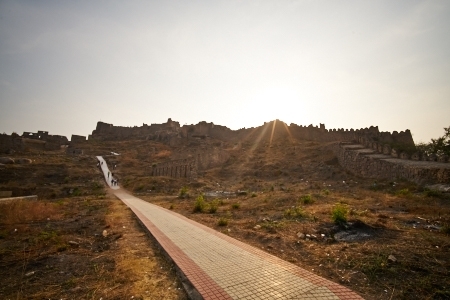 Charminar is both a Mosque, and a towered gate, built in 1591 to commemorate the eradication of a plague in the city of Hyderabad.  It is now the global icon of the city. Fairly close to the Charminar gate (within easy walking distance), is an elegant palace called Chowmahalla, that was modeled after the Shah of Iran’s Palace, complete with recently installed chandeliers in the audience hall that harken back to the time when the property was likely filled with expensive things and actively occupied. 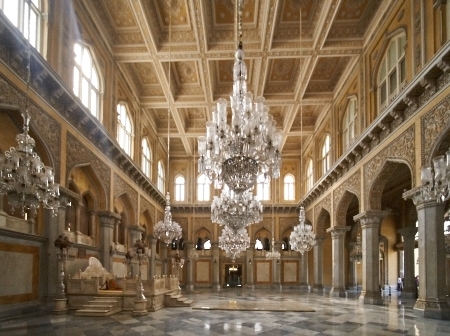 One of the more photographically interesting locations that I visited was the Qutb Shahi Tombs, which consist of domed tombs of for seven of the rulers from the Qutb Shahi dynasty, that were built starting in the mid 15th century. Although I was pushing my timing having arrived only 30 minutes before the official closing time, and the light was fading.   Alas, there was some significant reconstruction going on at some of the tombs further in. 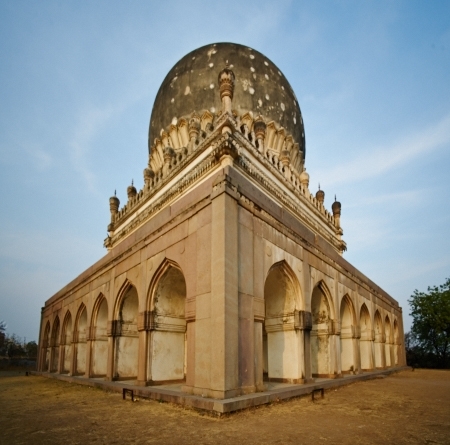 The Koti Residency or British Residency is a crumbling remnant of the British Raj, that is still in use.  Originally built as a mansion by James Achilles Kirkpatrick who was the British Resident of the Hyderabad state, it was also the embassy of the East India Company at the time.  Since 1949 though, it was converted to a University College for Women, however the property has buildings that are in considerable disrepair, with even one ceiling having collapsed in this section: 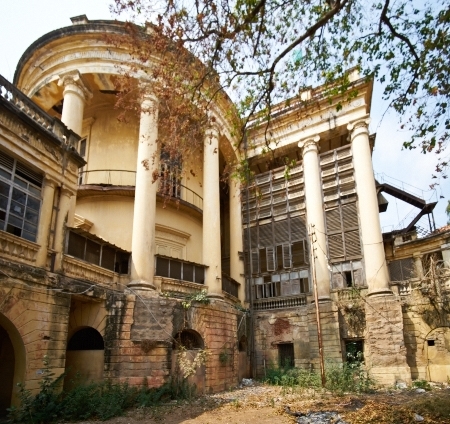 Just what every Women’s College needs, a few canon’s lying around. Hyderabad also has its own unique cuisine, like Hyderabadi biryani to name just one.  On the dining side, I found a hole-in-the-wall restaurant near my hotel that specialized in Punjabi cuisine, called Papaji Ka Dhaba, and pigged out on a plate of Tandori Chicken, great taste and price.  In contrast, for a change in level of cuisine I went to a fancy restaurant in the Marriott hotel in town, and indeed I did get a change – but the change was for the negative in taste.  I was disappointed by both the buffet, and the price.  It is so typical of India, that you can find great food even in restaurant or kitchens of even small hotels – where its closer to home cooked food than commercial.