Mumbai (Bombay) is India’s most populated city at 18.5 million people.  While I much prefer smaller cities in India compared to the huge ones, Mumbai is one of my favorite cities overall in India, and most certainly the one I prefer out of all the large ones.

I decided to stay in South Mumbai, and it was a good choice location wise in many respects, as I had fairly easy access to the downtown core that features many large historical buildings, parks, and restaurants. In fact I could and did walk from my hotel to downtown a number of times as I explored.  It was also fairly easy to get around by cab, so I was able to visit a number of markets and other interesting areas.

“Afternoon Siesta at the Market – Under Watchful Eyes” Near Crawford Market 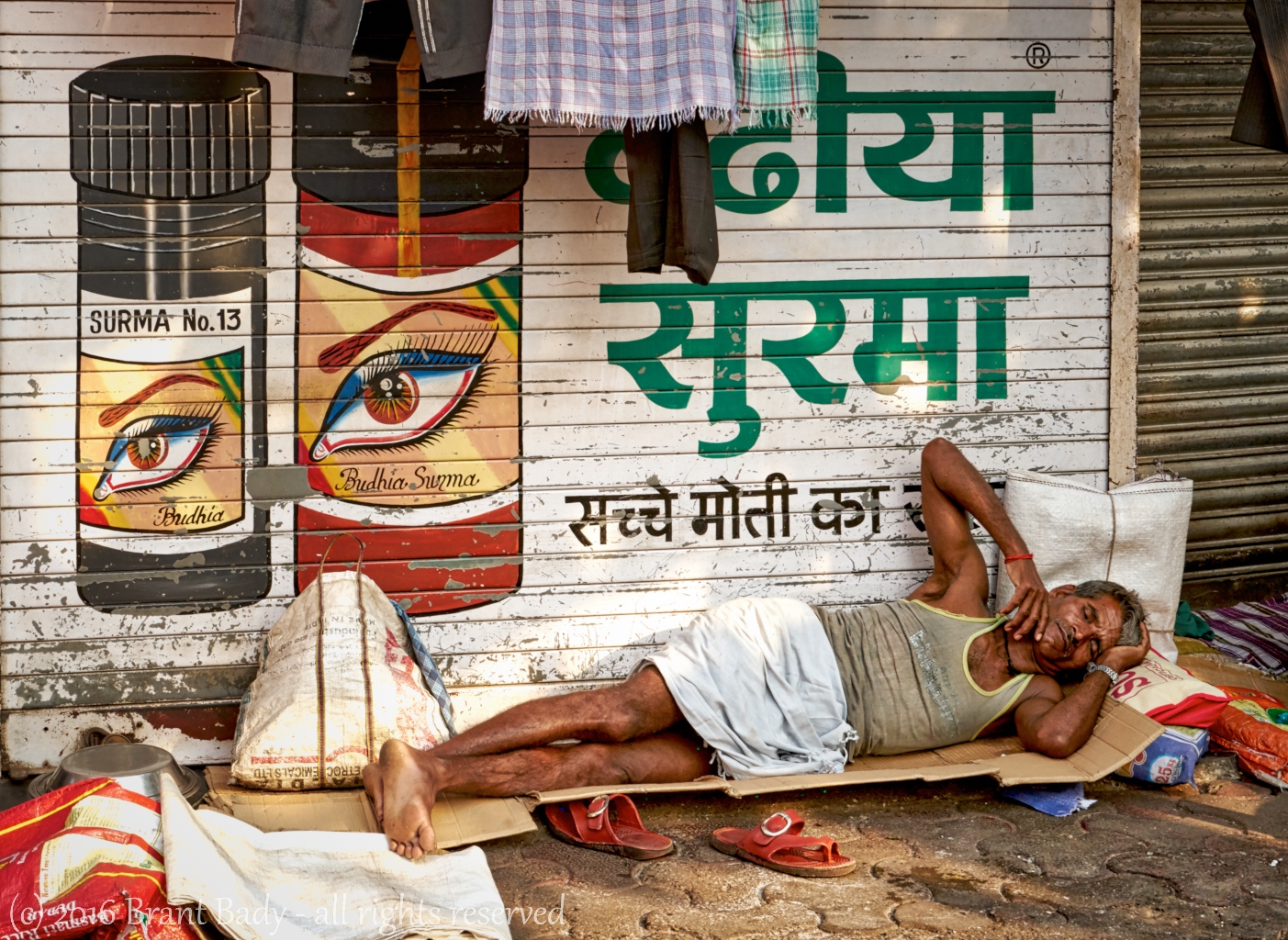 From the advertisement on the wall, “Surma” in Punjabi, or “Kohl” in Hindi, is an ancient cosmetic used by both men and women and even on children and infants, used as medicine as well, and for religious occasions. When applied as a dot it is thought to ward off “bad glance” or “evil eye”.  Of course, older preparations were also purported to contain lead and caused lead poisoning..

In the old Crawford Market itself, I came across these guys, the huge one was giving the guy on the floor a back massage by walking on his back barefoot. Since the massage guy is so huge, he needed the small guy on the right to stabilize himself. 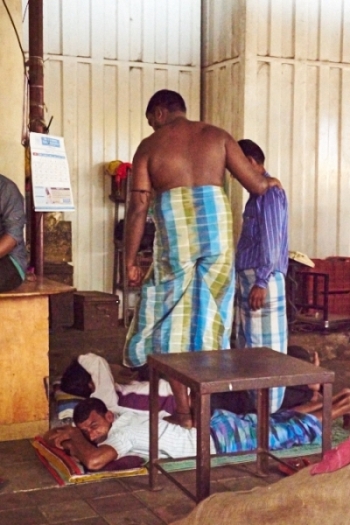 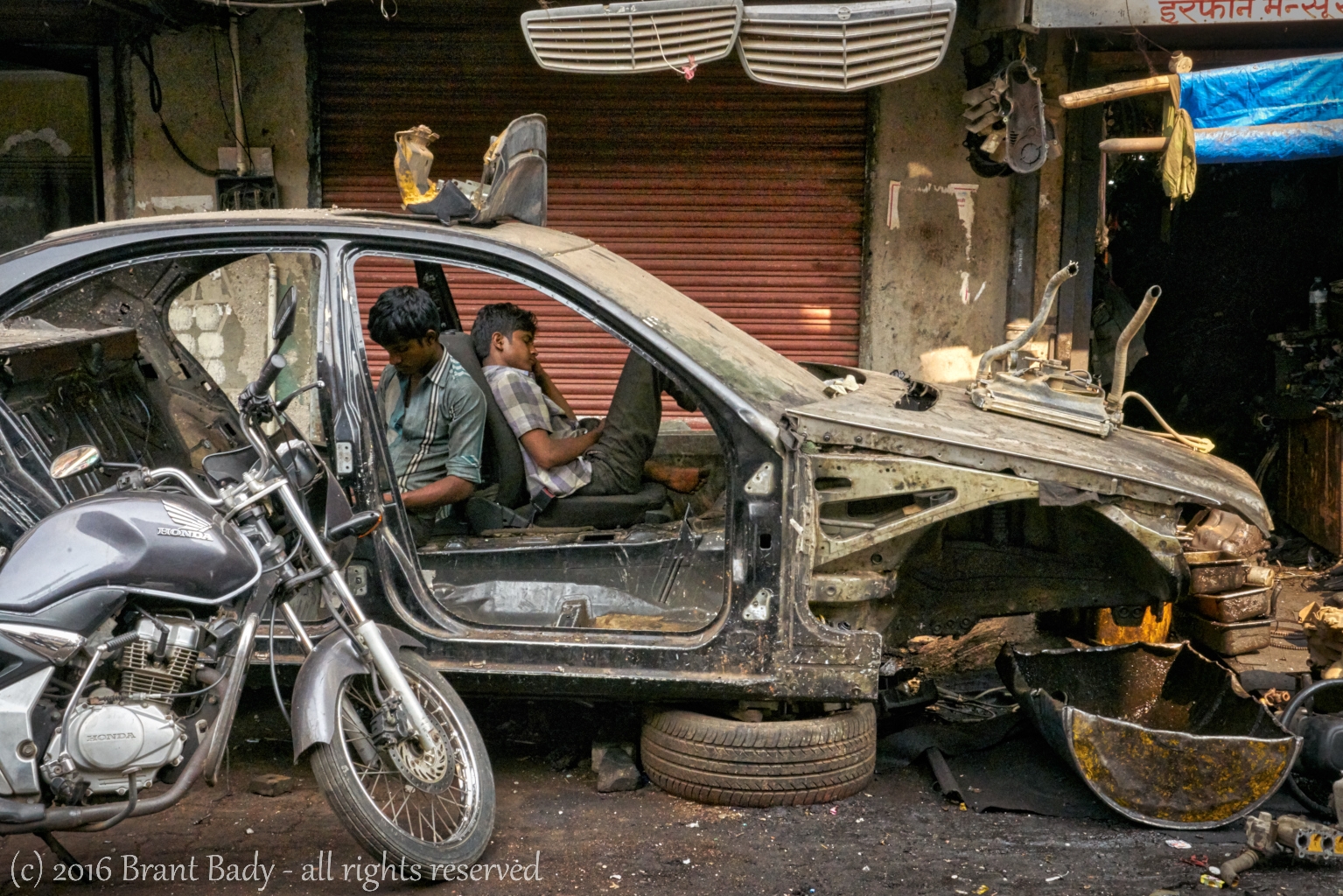 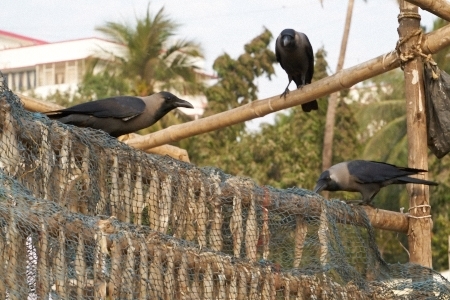 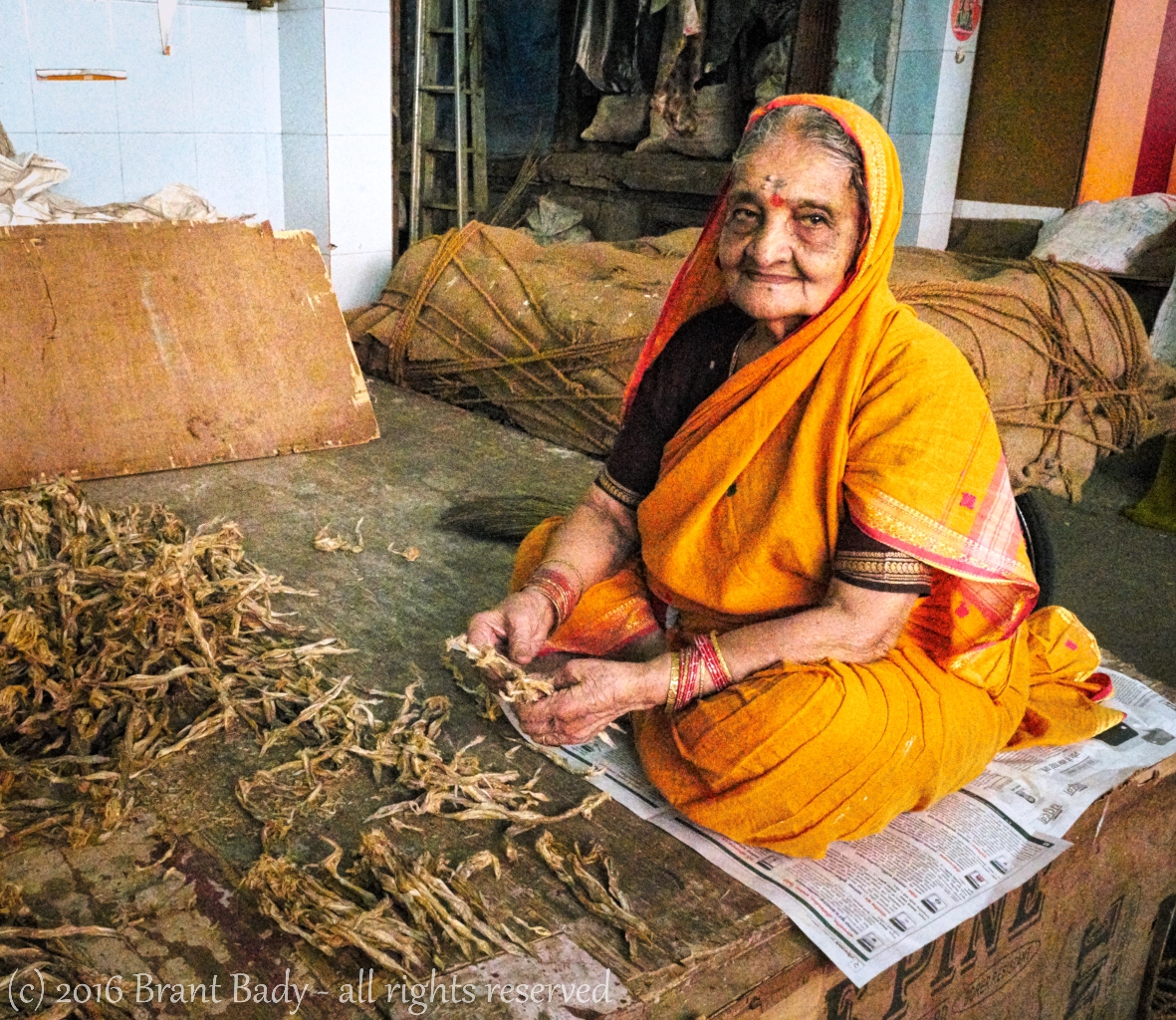 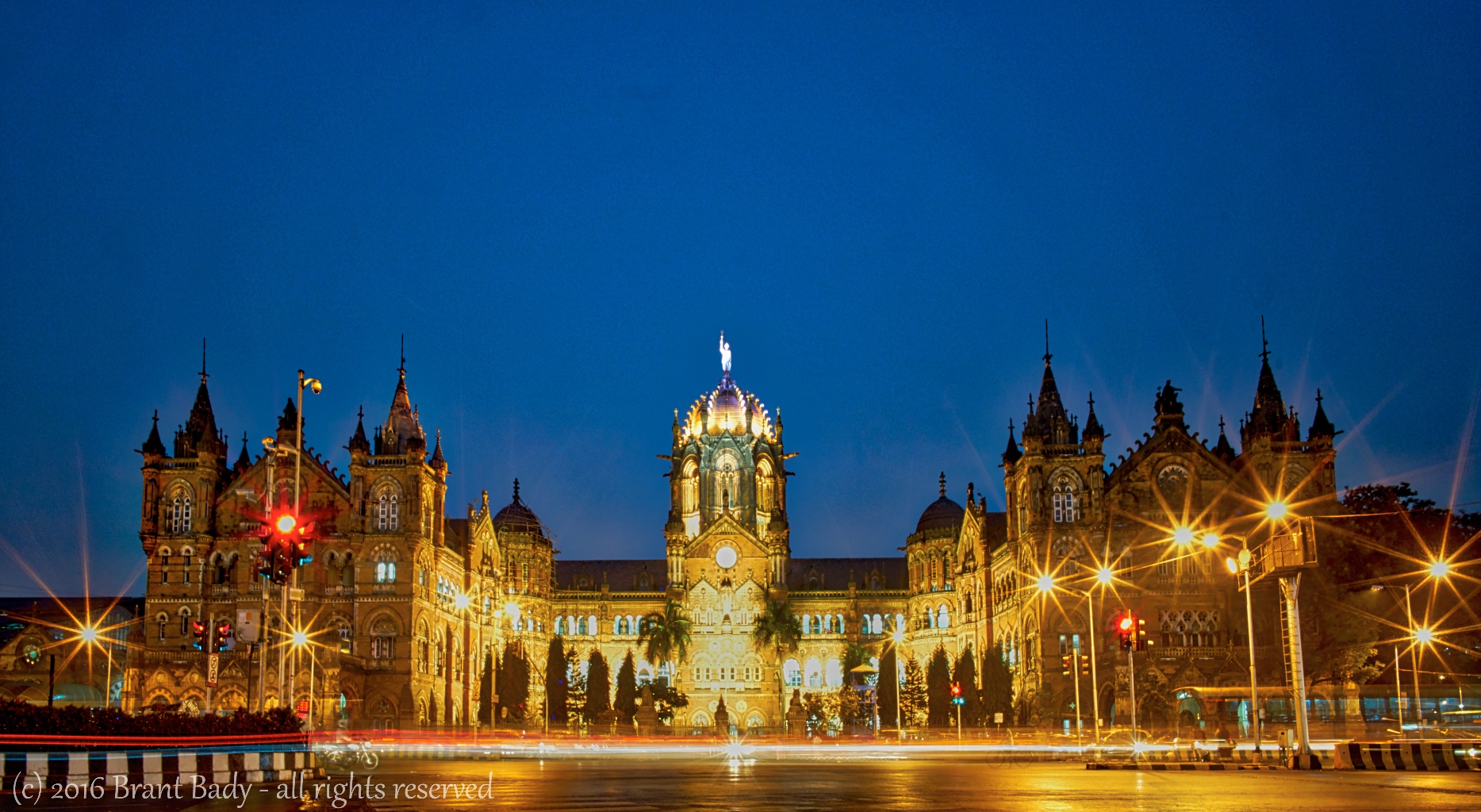 Sadly, while Mumbai has many very interesting historical buildings, many if not most are off limits for wandering around on the grounds or getting close to due to security concerns.   I had also gone down to the Sasson Dock as it is known to be a rich source of visuals, but its also a no-photograph area enforced by the Port Authority.  Operating out of the principle of “Better to Seek Forgivness, than Permission”, I wandered down camera in hand, and was quickly told to stop taking photos.

A typical day at Mumbai’s famous “Sassoon Docks”, the auctioning of freshly caught fish on the docks wharf. 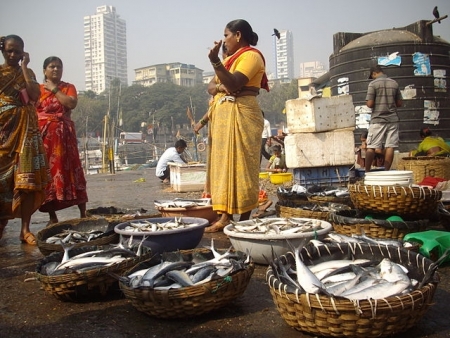 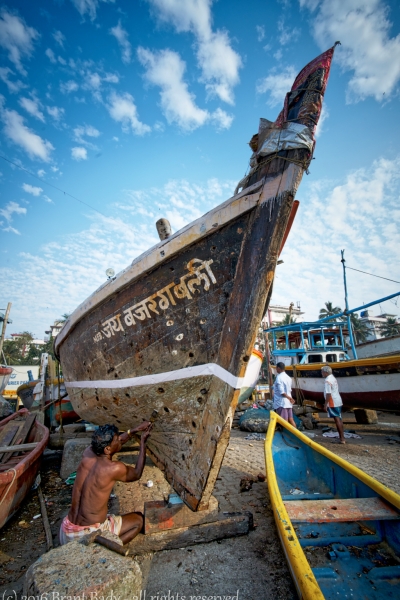 I am getting nautical here, for your “Edumacation” Being “On the Hard” is when your boat is on land, and being “On the Beach” is when a Captain/Skipper is without a boat or command.

In this case, these guys are “off the hard, and off the beach” – although I would question the general seaworthiness of the vessel given that it is just styrofoam pieces in a net, but perhaps fine as a “personal water taxi” 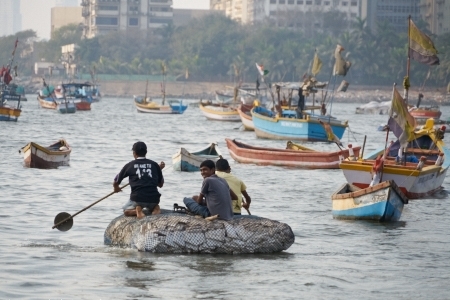