One person’s is another person’s “Snake Oil”, so I need to preface this posting with a disclaimer upfront, do NOT construe any of the following to be medical advice you should consider, let alone follow.  Just treat this all as a description of the kinds of “Snake Oil” that I use to make myself think I am healthy and happy while on the road.  None of the statements below have been evaluated by any entity responsible for regulating food or drugs, and you should consult with a qualified medical professional before considering trying anything below.

I travel a fair bit.  Last year I was on the road for 6 out of 12 months, visiting 10 different countries over that period.  This is by design, as in order to retain my cherished Gold Status with Star Alliance Airlines, I must fly a minimum of 20,000 miles a year with those airlines in the alliance.  With that much continual exposure to foreign environments, I need to be able to take care of myself, particularly as I love the freedom of traveling solo, and forging my own path.

My first step step before venturing out is to review the list of inoculations or shots that I have and what might be required where I am planning to go, Tetanus – yes, Hepatitus A & B – yes, Yellow Fever – no (I just got my yellow fever shot while in Costa Rica, and it took a morning to get done, with a $100 USD fee, so it might have been smarter to get that one done at home (cheaper and easier).

My “Gauntlet of the Gut” Remedies

It would appear that in many cases, water borne bacteria and bugs are the most common vector for stomach & gut problems, and in some third world countries, you sometimes cannot even trust bottled water.  When traveling in Thailand I have tended to be fairly promiscuous in terms of trying street food and other local “delicacies” such as raw pig entrails in blood with basil, and insects like grasshoppers, ants etc. , and I would frequently pay the price with gastroenteritis.  I used to say that if you didn’t get this kind of food poisoning at least once a month then you weren’t traveling hard enough and diving into local food scene.   However in places like Myanmar and India as well, I pretty much passed on the majority of street food as I scoped out the preparation and sanitary conditions and decided to pass.  Over the course of a three and a half months touring in India, I only had some minor stomach distress, and I mostly put my good luck down to the use of a filtered water bottle, such as Water2Go, Clear2go or other water filter brands.

Calcium Antacid tables – in order to be adventurous with cuisines, one needs remedies for when things go astray. I chew calcium tablets at any hint of heartburn, which happens a bit, because I always order the spiciest food I can.  I bring them with me now, because simple calcium antacid tablets are not always easy to find in some destinations, and pharmacies in 3rd world countries may try to substitute something more sophisticated (like proton pump inhibitors) that might not be advisable for you.

Malox, Gaviscon – These are next level up that I use when its really uncomfortable down there in my stomach, or when the calcium isn’t effective.

Immodium – when the problem is at the other end of my GI tract. This can sometimes be hard to find or explain what it is when in other countries, so I always carry a couple of small packages.

Oil of Oregano – I use these as a great natural first line defense before I have to resort to antibiotics. I have to buy them at home, as I don’t rely on being able to find them while traveling, and I use them as necessary, a few times a day, for a day or so.  I call this “napalm for bacteria“, so once I have finished my oregano regimen,  I follow up with a good pro-biotic pill for a few days to repopulate my gut bacteria.

Ciprofalaxin – when I feel that tight knot in my stomach, then I clearly have a case of gastroenteritis.  I use this antibiotic as it is broad spectrum, but this is old technology and not so effective in some of the locale’s that I have visited, India for example, as the bacteria there is resistant to it.  However, this is my standard general purpose one – and I use it routinely so as not to breed resistance to too many different kinds of penicillin.

Local Antibiotics – Its only when Cipro fails that I seek out the local stuff. The Cipro is a bit of a temporary firewall defense actually, therefore I save the big guns of the latest antibiotics for when and only if I really need it.

A Note about Resistance to Antibiotics

This is becoming an increasingly serious problem due to over prescribing, and frankly its also probably tied also to routine use of antibiotics in our food supply by meat producers.  For these reason that I prefer to use antibiotics as my last resort.  See this recent fairly scary posting about mutant superbugs.

Sometimes when traveling, I find my internal clock gets all messed up due to jet lag, or just the hectic nature of travel and/or being in a different country, so a bit of insomnia occurs.  Traditional Chinese Medicine surely has a few things to teach the west.  One preparation called Shui De An, dates back to the Tang Dynasty (~ 1200 years ago).  I take a couple of capsules with some water about an hour before I plan to go to sleep, if I have any concerns about a bit of insomnia.

The Special “Insurance” Red Pill – purported to have been used by the Viet Cong.

Another “magic” preparation from Chinese Medicine is Yunnan Baiyao, which in China is as respected as penicillin is in the west.  Yunnan Baiyao comes in two forms, a plaster that is suggested for minor muscle or joint pain, and a capsule to be swallowed that can help reduce internal bleeding, or broken open and the powder sprinkled on a wound.  Part of its notoriety comes from it being carried by the Vietcong in the Vietnam War,  due to its hemostatic properties.  While I don’t normally go to countries where I expect to get shot, accidents can happen (particularly in the realm of transportation) where someone gets seriously injured and is bleeding.  The blister pack of capsules contains a small red pill in the center, that I would use ONLY in a very drastic situations that are immediately life threatening (gunshot, impaled, severed limb).   Not a good remedy to use though if one was bitten by a highly poisonous snake, like the Russell’s Viper in S.E. Asia, whose venom induces blood coagulation (clotting), unless I was looking for a quick end to a lot of pain due to no hope of rescue.

For a while I carried hand sanitizer, and I used it fairly frequently, but I have come to the personal conclusion that just washing my hands before eating is a more useful approach for my kind of travel (which tends to be months long).  The duration of exposure is much longer, so the odds of getting sick at some point are higher. In my opinion, controlled exposure and gradual building up of your resistance to the local bugs is a more sustainable, and effective approach, as its impossible to travel in a “plastic bubble”, and frankly who would want to if they had any choice in the matter?

Diamox is one of the prescription medications you can get from your family doctor to reduce the effects of altitude sickness – a problem you can get without trying to climb Mount Everest – just go to Quito, Ecador (10,000ft elevation), or Cusco, Peru (11,000ft).  An alternative remedy is to use drops of liquid chlorophyll (check your local vitamin store, or online) in your water, about an eye dropper to a big glass or your water bottle.  Try drinking this frequently, starting a few days before you arrive, and you might find that you are not effected at all, or at minimum.  Watch out though, the undiluted drops will stain things, and you might find that your bowel movements are bright green – no harm there though.

After getting more than 200 bites on my lower legs due to “Sand Fleas” and suffering with weeks of itching (see the post Go Ahead, Bite Me or at Least Try To! , the one thing that I found to provide relief from the itching was a Windex like blue window cleaner.  I would just apply some using a paper towel etc to the itchy area and it would help immediately (due to the ammonia in it).   In San Juan Del Sur, Nicaragua, I was told that a couple brands of Mexican laundry soap could be effective for prevention against sand fleas, and so I bought some of the soap (its a light tan colour and comes in package of 4 rounds or so, with quite a strong smell), however I have yet to definitively test it to assess it effectiveness.

My alternative to commercial hand sanitizers, is to carry a smallish bottle of Vodka, that I have infused with lemongrass and kaffir lime leaves.  I developed this remedy to deal with smelly gross shoes and sandals, as I had first found a commercial foot spray in Thailand that has based on kaffir lime leaves that worked great, but I couldn’t find more of it.  It also came to my attention (see 15 hacks for using vodka) that Vodka was also a good general purpose disinfectant, especially for feet, and if you are in the tropics it has use in “any” place subject to growing fungus or rot – might sting a touch on open cuts though.   So combining the vodka and herbs meant that not only did I now have a general purpose disinfectant and cleaner, but I also had an infusion that could be used for an emergency cocktail – think of it as a Thai inspired Mojito! One could of course substitute other appropriate herbs for the kaffir lime leaves and lemongrass, even snake heads or whole serpent bodies!  In northern Vietnam near Halong Bay one time, I ate at a restaurant that had huge carboys of alcohol with snakes and even a duck (complete with feathers) floating in it.  It turns out that Snake Wine is a popular drink in Vietnam, Korea, and China, as it is believed to be a curative under Traditional Chinese Medicine. 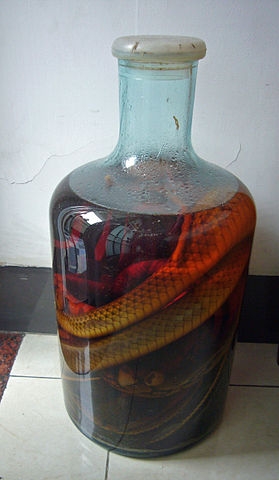 To each their own poison, and remedies too I guess!