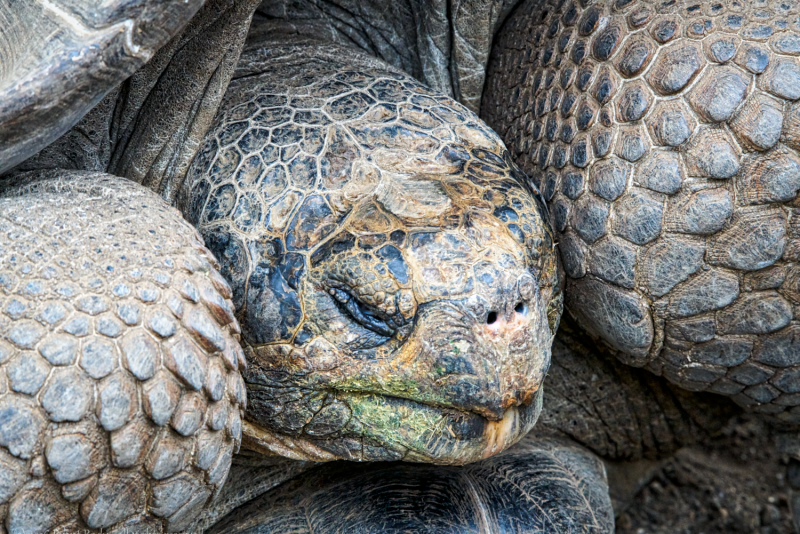 Galapagos Land Tortoise – well armoured and safely tucked in for a snooze.

The Galapagos Islands are all about “change”. The islands themselves were created and deposited by undersea volcanoes moving along due to continental drift over millions of years – literally that is the difference in age between the newest and oldest islands in the chain.

These wind swept volcanic piles of rock are nourished by the convergence of five different ocean currents across the various seasons, conditions which, in conjunction with their isolation, allowed for a number of “endemic” species (only found there) to develop. One visitor, Charles Darwin, was able observe and recognize change in the animals and plants on these islands, and thereby develop a theory that would help “change” our own understanding of the origins of life.

The islands also have new residents, those being “introduced” species. The top three introduced species in order of highest damage and impact, as well date of introduction would be: human’s first, then rats, and then finally goats – indeed nice company we keep. Biologically, what slowly evolved over millions of years has been undergoing unprecedented change in the last few hundred years. 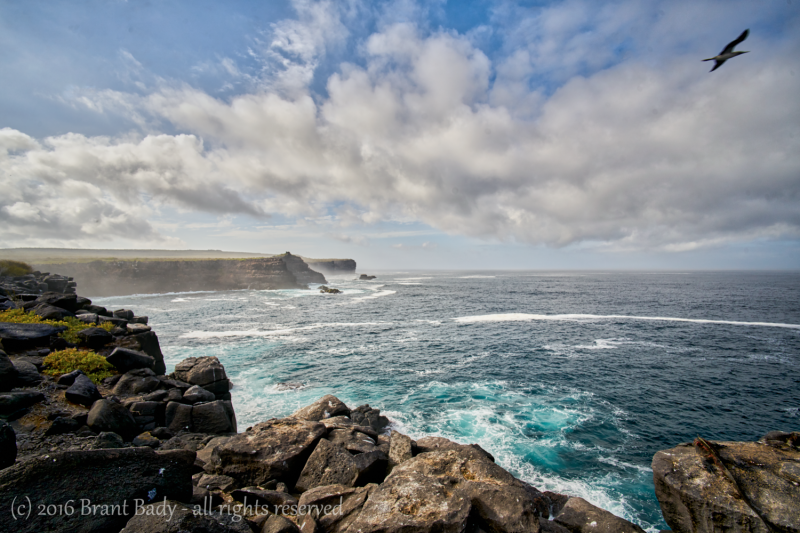 Relentlessly pounded by waves from the open Pacific Ocean.

A Brief History of the Galapagos

The Galapagos were originally “discovered” in 1535 (the first recorded visit), by a Catholic bishop, father Thomas Berlanga. The father was sailing en-route to Peru, but his vessel was dragged by the strong currents out to the Galapagos Islands which lay approximately 600 miles from what is now the coastline of Ecuador.

In the ensuing years, the Islands became the refuge of pirates and the hunting grounds for whalers and sealers, arguably both of which were intent on pillaging, the former would prey on towns and villages along the coast of the mainland, and the latter for the purpose of harvesting animal by-products such as whale oil and seal fur. Tortoises were also harvested as food, as they could be kept alive on ships for quite a period of time.

Of course, the most famous visitor to the Galapagos, Charles Darwin, did so as a stop on the much longer voyage of HMS Beagle (1831 to 1836), where he was a traveling/dining companion initially, but eventually assumed the role of the ship’s naturalist. It was the unique variations and adaptations that helped give Darwin the clues to develop his Theory of Evolution and write the “Origin of the Species”.

Thankfully the Galapagos Islands are now both a National Park of Ecuador as established in 1959, as well as designated a UNESCO World Heritage Site since the 1970’s. Second only to Australia’s Great Barrier Reef in terms of protected area, they are generally thought to be well managed. However new challenges are presented by both the volume of visitors (more than 200,000+ annually) from the effects of climate change, with its penguins and marine iguanas thought to be some of the most susceptible species. 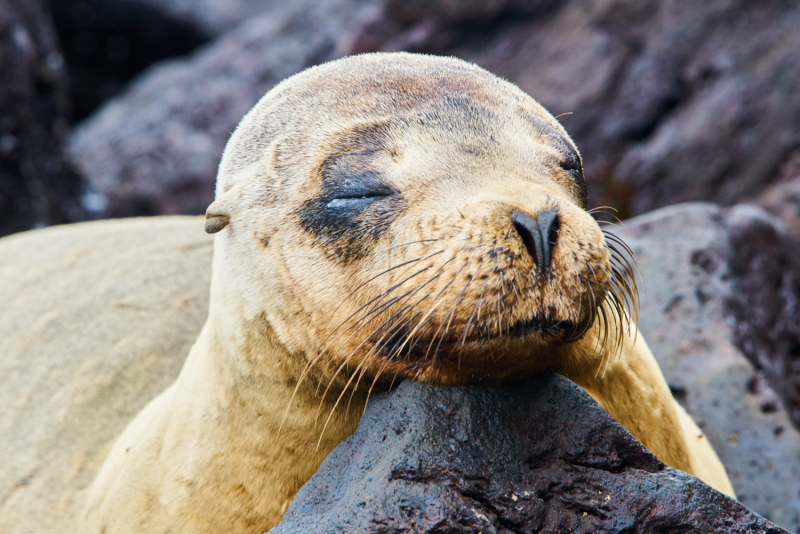 Getting There and Getting Around

Nowadays, people visit the Galapagos Islands because of the abundance of exotic, and approachable wildlife that can be found there. Visitors fly into the airport on Baltra Island and then either head off onto a cruising boat for a week or so (which is the traditional and well regulated way to see the Islands, and there are more than 60 vessels providing tours), or explore the Islands by land taking specific excursions and moving between some of the Islands by boat or ferry. The cruising boat option is much preferred, but priced accordingly. Note that its not possible to wander around freely in the wild on the various Islands – one has to be accompanied by a qualified Naturalist guide. This is a good thing.

The Galapagos Islands are suitable for visiting at any time of the year, but the conditions vary, as do the kinds of things one will likely see in any particular season, so a bit of research in advance is desirable.

Snorkelling is a hugely popular activity, and, scuba shops abound for those who are certified divers.  This is world class snorkelling and diving, and while the water is cool, and not necessarily the clearest, it is this very richness of plankton in the water column that supports the abundance of wildlife.

In my case, I elected to start with a couple of days of scuba through Academy Bay Dive shop, staying on shore at night, but then transferred to a motorized 105′ Yacht of briganteen style and function of sail, aptly named the “Beagle”. I had done my research over the last two years in trying to get to the Galapagos and to my knowledge, the Beagle is the only cruising Yacht there that has a cabin for just one person, hence there was no need to pay a single supplement charge to occupy a two person cabin just by myself or have to share a cabin with a stranger. Both choices turned out to be provided by excellent companies, both in the top notch service and comfort, but also the locations they took us to were superb experiences.

Hanging Out with The Hammerheads 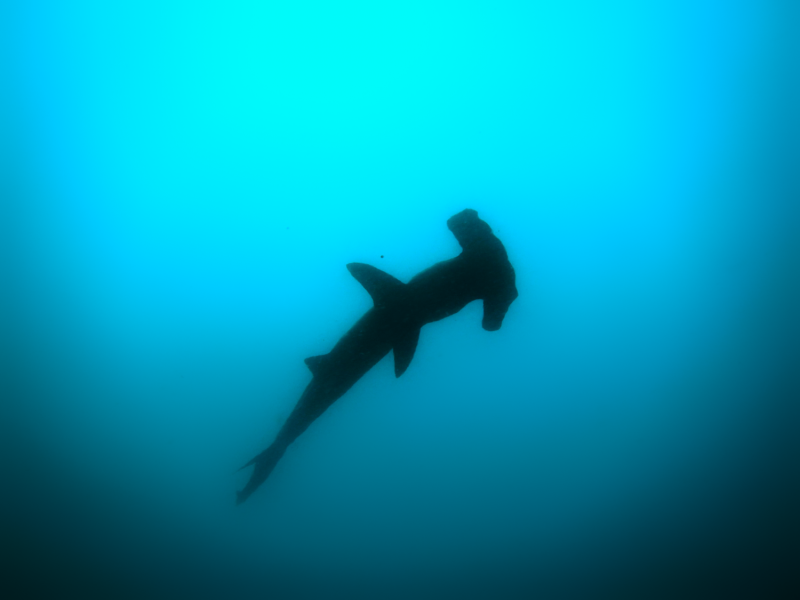 Gordon Rock is notable for being a great place to see hammerhead sharks, but its also fairly challenging in terms of conditions and currents, so its not for novice divers. While hanging onto a rocky cliff in the current this hammerhead gently swam into view, checking out the rising bubbles for five or six minutes before heading off into the abyss again. 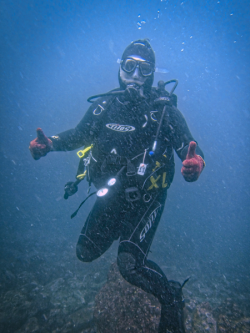 The “Dogs of the Sea” Will Sleep Anywhere

Anyone diving or snorkeling is very likely to come in close contact with sea lions in the water as they are very inquisitive and will swim circles around people as they check things out. Reminiscent of dogs frolicking in a back yard, they actually are the masters in terms of moving around in the water. Luckily they aren’t the largest compared to other species found around the world.

Out of the water, Sea Lions are likely to be lounging around anywhere near the shore, even on a park bench right in the middle of the main pier at Puerto Ayora on Isla Santa Cruz. 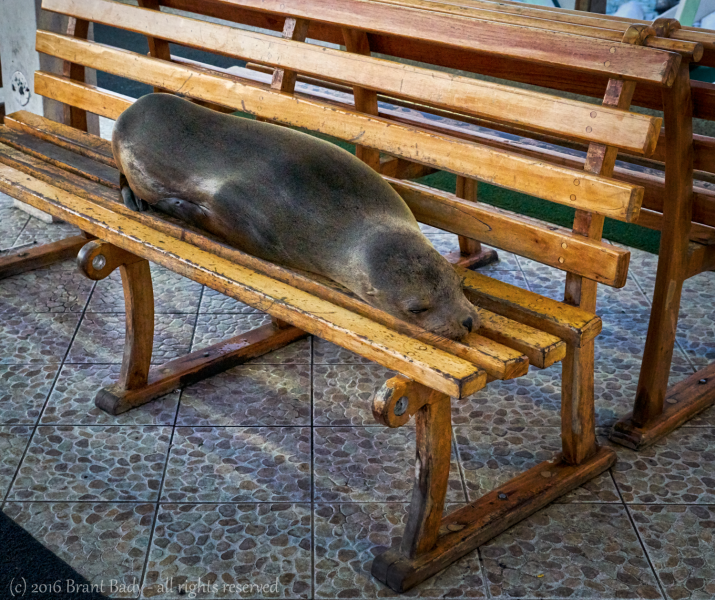 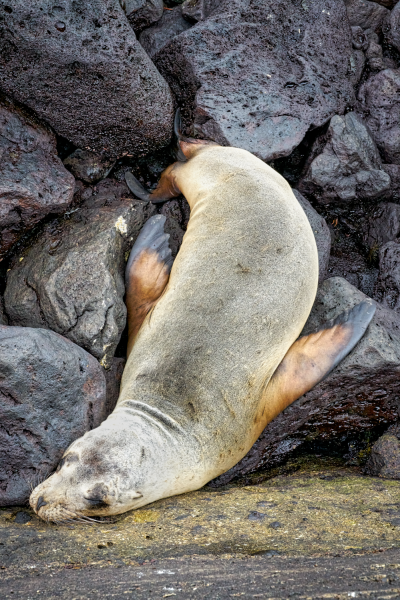 But do take care, they can and do bite if someone gets inside their comfort zone, and those fangs are serious weapons. 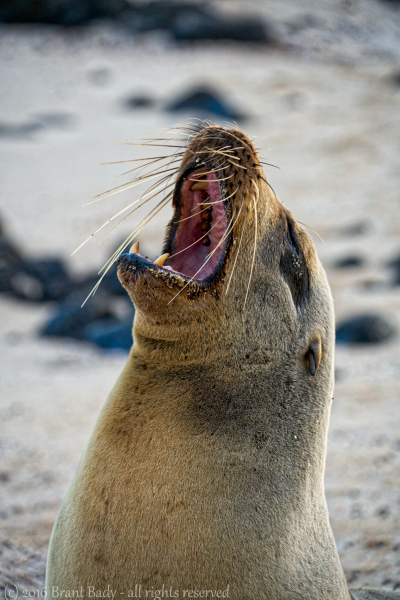 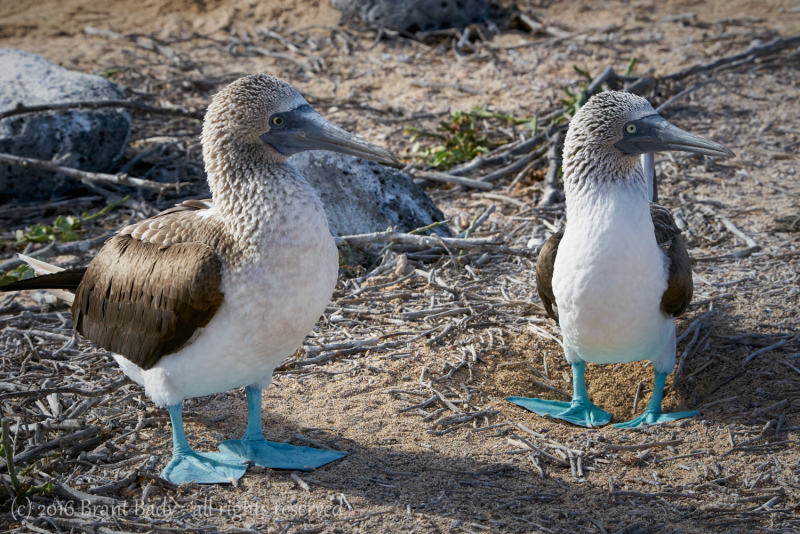 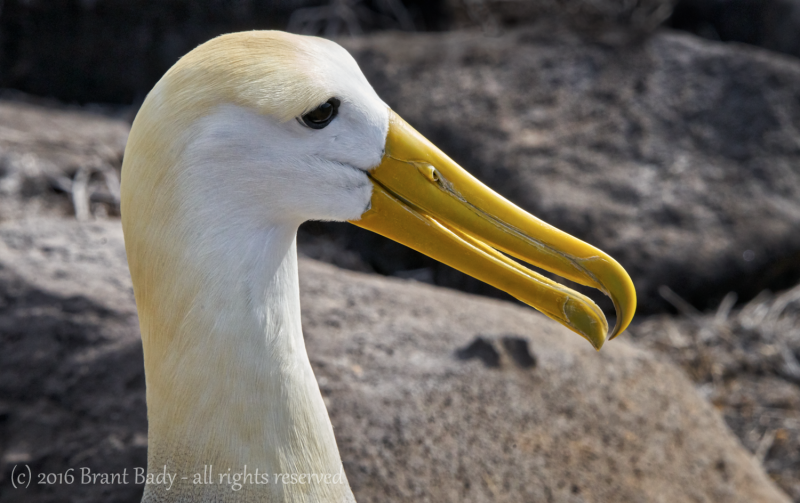 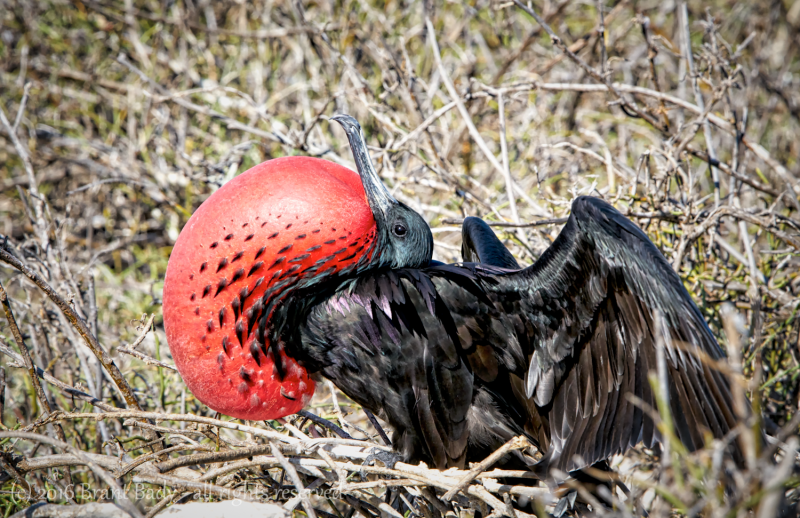 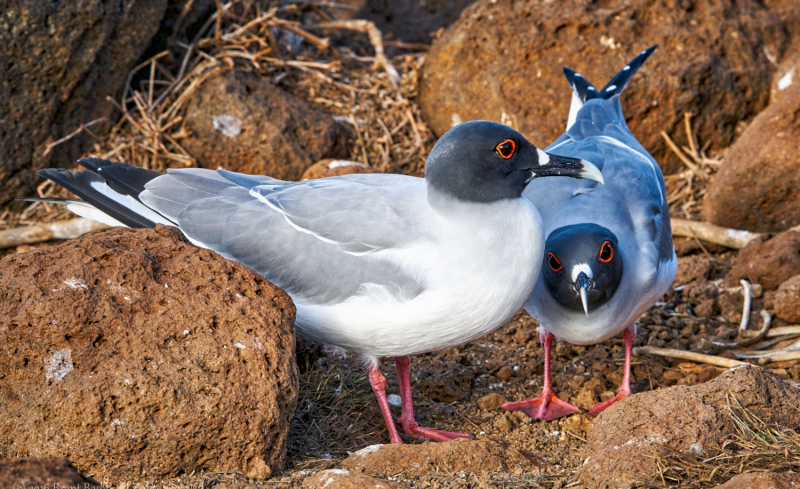 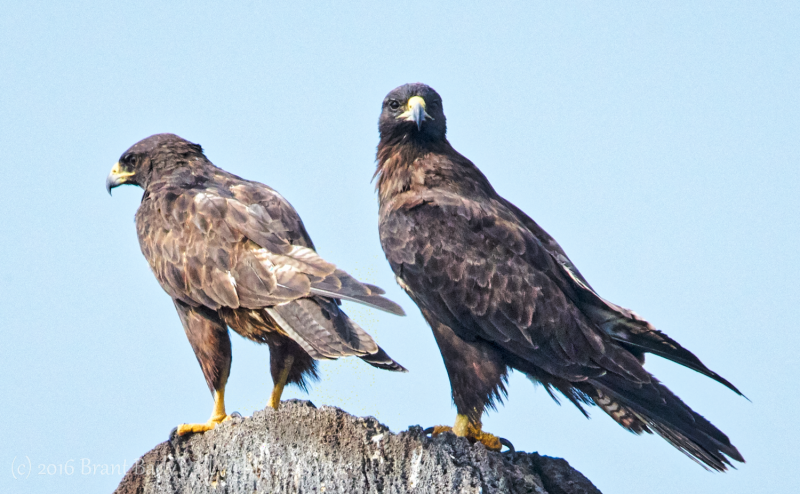 There be “Two” Kinds of Dragons Here

The islands are literally thick with Galapagos Marine Iguanas, even at the shoreline in the middle of town these smaller ones are all over, so you have to watch where you step as they can easily be mistaken for a piece of lava rock. 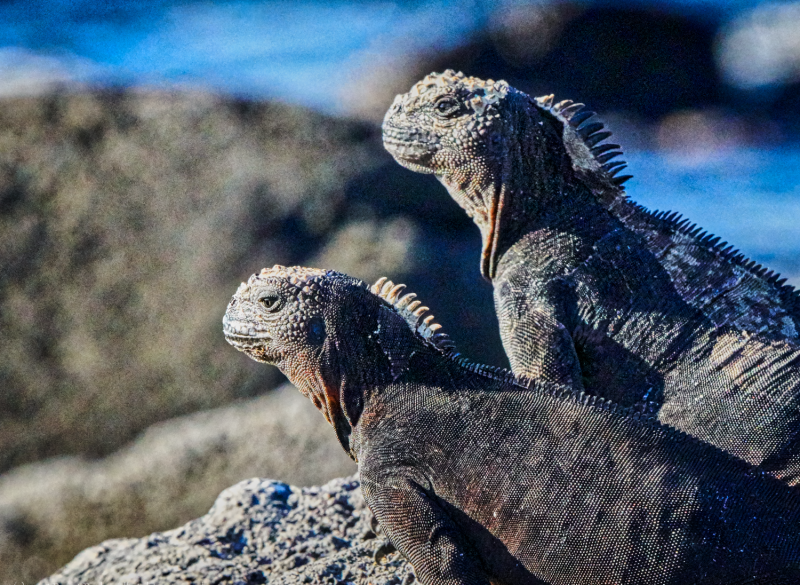 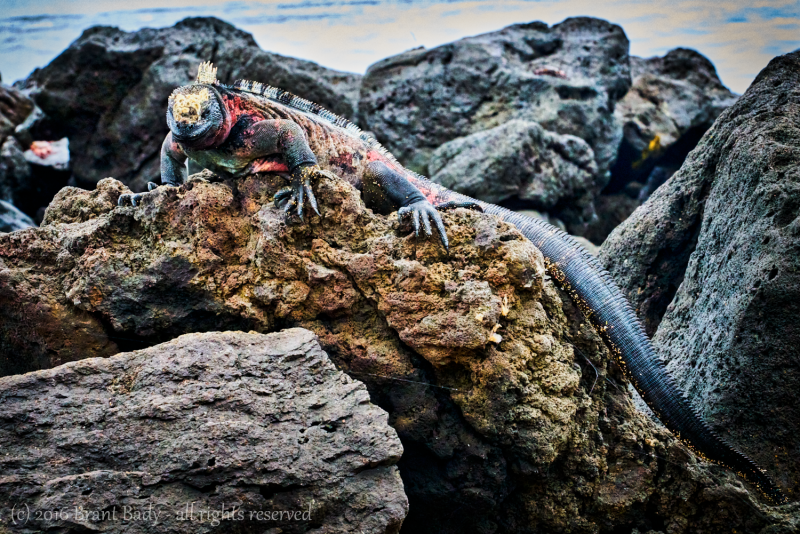 Marine Iguanas of this size and coloration above are quite striking. Charles Darwin called them “Imps from Hell”

The other species found here is the Galapagos Land Iguana, whom Charles Darwin called “ugly animals, of a yellowish orange beneath, and of a brownish-red colour above: from their low facial angle they have a singularly stupid appearance.” The two different species had a common ancestor some 8 million years ago, with marine one adapting to be able to live off algae in the ocean. 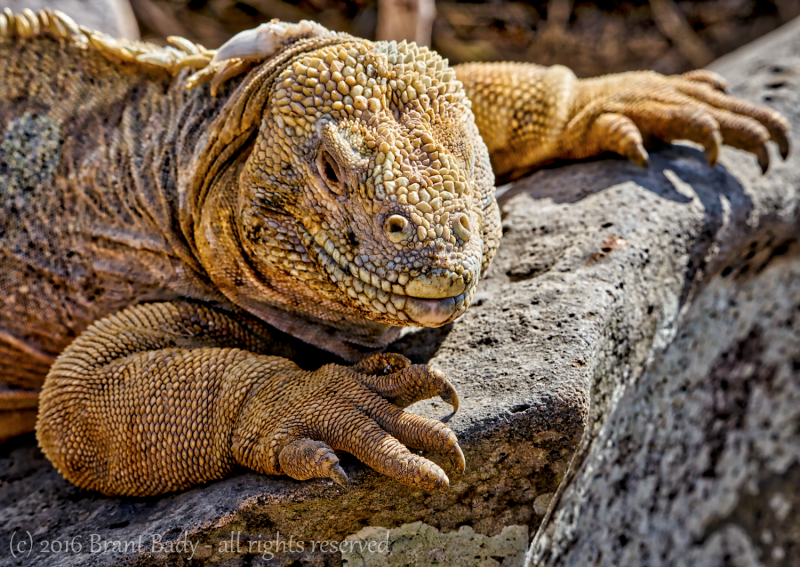 Hours of World Class Snorkelling – Even for the Jaded

It matters not whether a visitor is barely past wearing water wings, or is extremely experienced in diving and snorkelling; there is so much to see in the water column.

My very last snorkel in the Galapagos Islands was truly world class, and something that I will always remember as being spectacular even though I have snorkelled in exotic locations all around the world. We had anchored in Bainbridge Channel, in between Isla Santiago and the Island named Chinese Hat.

In addition to swimming with three different specifies of sharks (Galapagos Shark, White Tip, Black Tip), I coasted along on the surface while a school of a dozen Eagle Rays in formation cruised the sandy bottom of a bay, spotted a very rare Peruvian Torpedo Ray (they are electric – about 40 volts apparently), came across a couple of Sea Turtles, and watched a feeding frenzy on a school of bait fish where the sharks and bigger fish pushed the school bait fish to the surface in a cove and then the seabirds (Pelicans, Frigate Birds, Boobies etc.) feasted like drunken pirates on what they could grab in their bills.

Just a little bit further at the next cove, even the penguins got into the action – a few of the bait fish were schooling in the cove where the penguins were hanging around on the rocks – my presence in the water watching from the outside edge of the cove was a slight deterrent to the bait fish escaping. The penguins were more than happy to take my unsolicited assistance; they dove in and were grabbing as much fish as they could, pretty much oblivious to my presence, as I remained motionless in the water. Otherwise the baitfish were going to be almost completely consumed by the sharks and fish, and the flying birds. Then penguins being swimming birds really only had scraps to clean up. I did have one little penguin swim right up to my face and then do circles around me as he chased and caught the baitfish. One confusing behaviour was that he would catch a bait fish and then toss it out of his mouth and grab it again. Possibly he was just re-orienting the fish in his bill so that the fish went down his throat head first so as not to have the scales pointing in the wrong direction – less friction that way. I have known seals to certainly do that – they will only swallow something like a herring, headfirst. 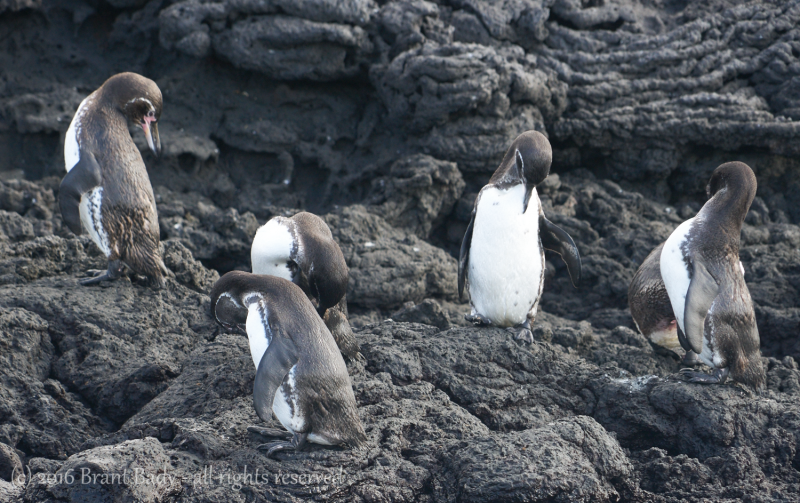 Truly the highlight of a fantastic day! 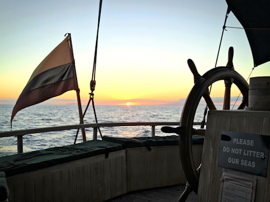 Sunset from the Stern of the Beagle