“How to make an exceedingly close to authentic tasting Pisco Sour, particularly when you are not in Peru”

A Pisco Sour is a cocktail that is quite popular in the South America countries of Peru, and Chili (both countries claim it as their National Drink), but it can be found elsewhere too.  Its base is Pisco, a distilled spirit made from grape wine produced in those regions, in effect, it’s a brandy.

Ernest Hemmingway was very fond of Pisco, and apparently holds the record for the most Pisco Sour’s consumed at the Bar Morris in Lima, where the drink was invented.  Other notable quotes the Pisco Sour or Punch are:

“Compounded of the shavings of cherub’s wings, the glory of a tropical dawn, the red clouds of sunset and the fragments of lost epics by dead masters” – Rudyard Kipling, 1889

“it makes a gnat fight an elephant.” – uNKNOWN

Which makes it the perfect drink for all wannabe and confirmed Honeybadgers I am sure you will agree!

My own introduction to the Pisco Sour was in South America while I was in Peru and Ecuador.  I fell in love with them instantly, and it became my new favorite drink, knocking the Margarita down one position from the top of my own personal list. 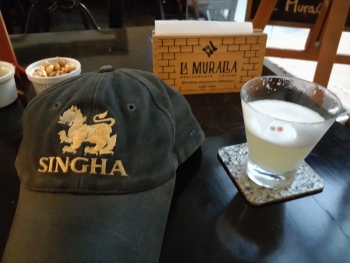 They make a very good Pisco Sour at La Muralla in Lima, and the dinner was great there as well!

Alas, I was not sure of the availability of Pisco at home, so I did a bit of research and brought back a bottle duty-free for “testing” purposes.  I avoided the Pisco that the duty-free staff were pushing, instead I selected one labeled “Tres Generaciones” because that brand comes from the Ica Valley in Peru (which is the only source of Pisco that you should consider) and because of the string of 11 medals that this distillery has received since 2007.  That turned out to be an excellent choice.   Initially, it looked as if the only Pisco that was routinely available at home was from Chili, and it was pretty rough stuff in comparison, but I subsequently found a Peruvian brand from Ica Valley (Grand & Noble’s Campo De Encanto Pisco), and it’s quite good as well, and from what I understand more widely available.

Here is my version of the standard recipe – which you can henceforth refer to as “The Wandering Honeybadger’s Pisco Sour”  because it truly is the best way I know so far to match what a Pisco in Peru actually tastes like, even when you are “wandering” elsewhere in the world.   I appreciate you might think that is a bit pretentious, but that statement is completely evidence based.

Some, like the tour operators here http://escapedtoperu.com/travel-library/peru-travel-library/pisco-sour-a-must-try-on-your-peru-tour/  say you must go to Peru to get the same taste.

I say, that you can get extremely close, especially if you have an educated palate, or as this Honeybadger is known for, a Crocodile’s Tounge” (a Thai saying for someone who only likes the most delicious food).   Anyways, the issue is the type of citrus lime used down there is more acidic than you are likely to get when you are NOT in Peru or have NO ACCESS to the same citrus even by shipping.

So in order to more reliably and spectacularly hit the required level of sourness when you are “wandering” and don’t happen to be in Peru, I suggest you try “The Wandering Honeybadger’s Pisco Sour” as follows:

1.5 oz egg white (i now use the pre-separated egg white you can get at most grocery stores)

Add all the ingredients except the bitters to a cocktail shaker with ice.  Shake vigorously, then use the shaker to strain out the ice while pouring it into an old-fashioned glass.  To finish, add three drops of the bitters onto the foam at the top.

Proportionally, my version is pretty close to the standard recipe, but it’s slightly more balanced in terms of the flavors in my mind (based on my experience with Thai cuisine).  The use of fresh lemon and “from concentrate” lime, and the palm sugar are two another subtle modifications that are the actual secrets for matching the taste as in Peru pretty darn close.  You can see from this article that the acidity of Realime etc. is more consistent, more acidic, and more sour due to the rind being utilized in the process https://agardenerstable.com/2011/04/19/real-lemon-versus-realemon/.

The second and more subtle point is, that because the Realime process uses the rind, which besides being sour also adds a slightly bitter flavor.  Lets not forget the last ingredient on the Pisco sour recipe, which is bitters, so now we have a bit of two part harmony going on, which gets similar to what you experience having fresh – just picked ingredients.

If you share this post with your friends, and then send me an email to confirm it and let me add you to my newsletter “Honeybadger Tracks”, I will send you a copy of the exercise I use to educate people on how to balance flavors for Thai Cuisine, and there you will learn about the special properties of palm sugar when it comes to flavors.

Beware, two of these Pisco’s have put a few of my friends flat on their rear end or under the table!!!  They are quite powerful, given each one has 3 oz of Pisco that is 40% alcohol by volume.

And you should consider that any culture that can devise something as truly marvelous as a Pisco Sour, must and does have considerable other attractions, not including Cuzco, National Parks Like Manu, and Machu Pichu that are all definitely worth experiencing in person, the Pisco Sour is merely your invitation to visit!

Check out my recent favourite images from Peru, such as this one..