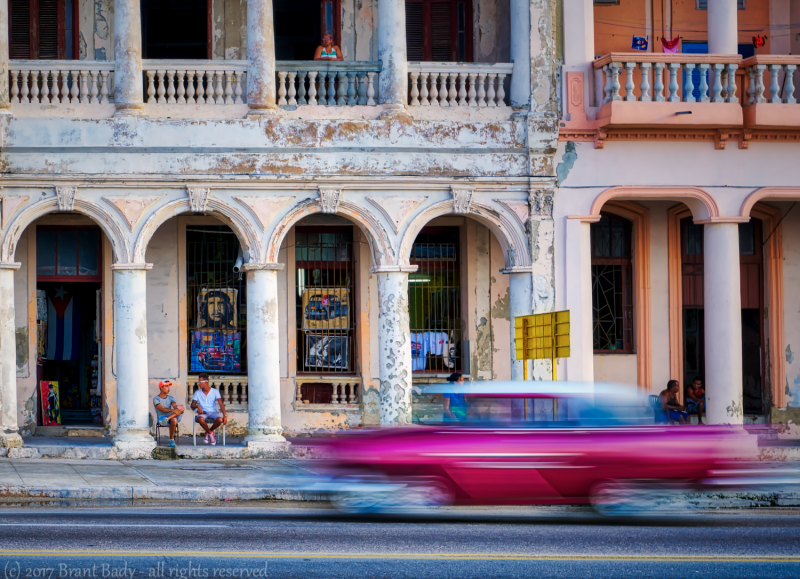 Learning “The Ropes”, or in effect “how things work” in a new country is not always easy, and I definitely have some forehead bruises from the process, hence the Head-Banging reference in the title, but Cuba is a visual treat for a photographer, and I very much enjoyed meeting and talking with all the Cuban people I did.  It reminds me of traveling in India in many ways, so I have taken to calling Cuba “India, Español” on occasion, especially when I am in a mischievious mood.

I am a Traveler, not a Tourist – Take this Plane to Cuba!

I had just landed in Cuba via a smaller airline, (coming from a week of fantastic scuba diving in Cozumel Mexico). The main airport in Havana was kind of what I expected for that of a communist paradise, basically old and dingy. However, rather than the third degree I was expecting from Cuban customs regarding just why I had so much cash on me as well as expensive camera equipment, they just waved me through and didn’t even bother to take or even look at my entrance card.

Back in Cozumel, there had been a jaw dropping the line of people taking huge boxes of TV’s, air conditioners, and other higher end consumer goods, as extra baggage on their flight to Havana… clearly it is a business to be an appliance mule if you can go to and from Cuba.. one guy had nearly a dozen large boxes.

Who’s Taking Who for a Ride?

I let myself be grabbed by an unofficial taxi tout, mostly because his English was decent, and from a few sentences it was clear he was educated.  In fact it was information that I wanted to extract from him as to “how things worked”, and I needed a pliable subject. I had turned down the offer of a “meet me at the airport and ride in” from my Casa Particular (the private home that has rooms that are rented to tourists – blue sign, not red) as it was overpriced by about 10 CUC (Cuban Convertible Pesos – the currency that tourists use).

Similarly I turned down the initial price this entrepreneur proposed. Instead I offered him the going rate of 25 CUC, and of course he agreed. I started laughing and said that he should make up a T-shirt with the name Cu’Uber (Cuba Uber, just without the internet part) and he thought that was pretty funny as well. BTW – I had a pre-cached google map of Havana on my mobile, and dropped a marker on it where my Casa was located.  It was a fixed rate for the ride, and I knew where I was along the whole route, so there was little possibility for monkey business. 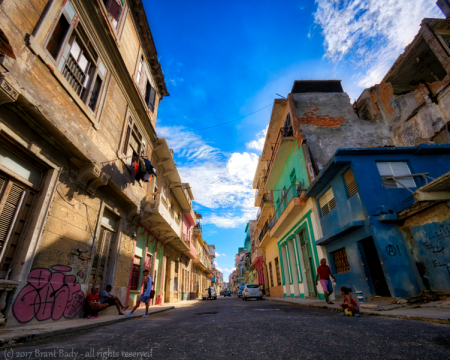 I knew Cuba was a poor country, but that fact sunk home on the ride into town in the last streets approaching my Casa Particular. The streets were pretty ripped up and the buildings were nearly a solid facade for each whole block (so typical of Latin America where the street side is protected by walls and bars and it is the inner courtyards that are like oases of livable space).

My Casa looked quite unimpressive from the outside, and then up a long flight of stairs, down a narrow hallway to a kitchen, then up another right angle set of stairs, but inside the room it was very nicely done up with lots of tile and nicely painted. The air-con actually worked, but it was a bit noisy, and the bathroom was spacious. There was even a TV, all Spanish channels and only a few of them to boot. What was of a bit more concern was that the lady running the Casa spoke hardly any English, and I spoke hardly any Spanish… but when I chose the place and inquired, I was receiving replies in English.. so something was afoot.

She was quite patient though, and we managed, with some amusement, to figure out most things. As an example, she was asking me in Spanish what my birthday was to enter along with my passport number in her register, and I couldn’t understand what she wanted… so she starting singing “happy birthday” and pointed to the relevant line. We both laughed like hell over that one.

Next issue was the question of internet.. which was “supposed” to be available. It turns out that “available” meant going across the street to the local mafia dude, paying him 1 CUC for an hours access to HIS WIFI router on my phone (available around 8pm usually). The “Terrorist of San Miguel” as I liked to call him (because his internet node was named losterristas), was all attitude.. things like don’t hand him the 1 CUC bill, put it on his knee and then he will pick up, etc etc. Complete bunch of nonsense and game playing. The WIFI was nearly total crap, as its being shared by all the other lurkers on the street below, and it was nearly impossible to get a web page to fully load. One might get lucky and be able to send and receive email.

I had a few days in Havana, so I naively reckoned I would work out a solution for the internet obstacle. Its not that I had trouble cutting the cord, its that I had only organized accommodation for myself at the start and end of my visit, and I was going to be a homeless person in the middle section unless I found something, one way or another.

Lesson One – Internet is crap in Cuba, everywhere. If you are lucky, you can find a place like a park or Malecon (seawall walkway) where the gov’t telecom has a signal, and where you can buy a scratch card internet access. Over 18 days in the country, across 4 cities/towns, I found a total of 7 places, and none worked particularly well.

You Weren’t Really Hungry, You Were Thirsty…

A long standing subversive joke in Cuba goes like this:

“During a speech, Castro asks: “Is there one, only one among you, who is hungry?” A poor hapless man raises his hands. He is immediately seized by the police and forced to drink a glass of water, then another, and yet another, until he has drunk ten altogether. Then Castro asks him: “Are you still hungry?” The man replies: “No, Comandante, I am not hungry.” “Well, you see,” replies Fidel, “you really weren’t hungry; what you were was thirsty.”

Seriously though, I didn’t see any starving Cubans, and more than a few a packing a few extra pounds, but I have no idea where they hide the food in this country.  There are few stores, and they a shockingly slim on variety as well as stock. Occasionally one see’s a veggie stand, or a meat shop on the street, but way less than would support the population.  I was also hoping that the restaurants I ate in didn’t source from the same kinds of places I saw on the street. 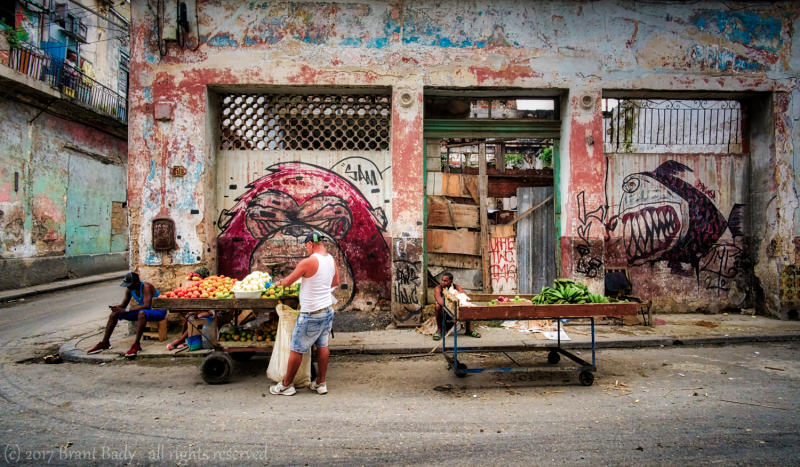 My first dinner in Cuba was at a nearby restaurant, the best thing about it was the hostess who was very professional, and the 4 young ladies who were the musical entertainment for the night. The food itself was a huge disappointment, a seafood paella, that was seriously over-salted to make it almost inedible. Given Cuba’s Spanish heritage, I had hopes of a decently done paella, with some actual socorat (the delicious crust that forms on the bottom of a paella pan when its cooked properly). This gringo can cook better Paella than most restaurants (ones in Spain excepted of course), so maybe I was hoping for too much.

So for the record, Casa’s are run by RICH cubans, they are not average people at all. One shouldn’t make the mistake this is like a home-stay with a regular family. Normally one can get breakfast at one’s Casa for 5 CUC, and given that there are very few other options for breakfast, its a no-brainer.  After breakfast the next morning, I was out and about starting to explore Havana, but it was raining intermittently, so my wings were a bit clipped, in that when it started to pour, it was very heavy and I had to seek shelter under a roof, along with everyone else. 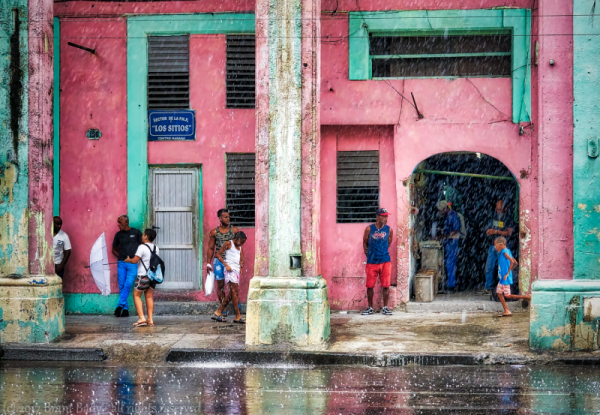 It did relent and I continued on my meandering path to the central area of Havana, and found a few photographic subjects worthy of taking some time to capture. Eventually, it was nearing dinner time, so I grabbed a bicycle taxi to go to Chinatown. Now I personally happen to find the ubiquitous nature of Chinese restaurants around the world to be a bit of a godsend (allowing for the American-ization, Indian-ization, etc).   You can usually find something of a known familiarity, global comfort food in my mind. I ordered the hot and sour soup (right ingredients, and consistency, but tasteless), fried rice (ok), and a stirfry Szechuan lobster dish that was quite tasty, but not spicy.

Lesson Three – Cuban food isn’t particularly spicy, so if you like the heat bring your own hot-sauce (I wound up stealing a bottle of tabasco from one restaurant). I would often tell the waiter/waitress that I would give them an extra big tip if they could get the cook to make it so spicy that it would make me cry, but I never had to payoff on that promise of extra big tip).

Over the next few days I wandered around most of the old town of Havana, it turned out to be the most productive in terms of photo opp subjects, but I also enlisted the services of a guide for one afternoon to get me out and past the core of Havana as he came with a vehicle. More importantly, he solved a problem that was wearing on my mind, as to how to arrange accommodation in advance WITHOUT having an internet connection to select and pre-book.

Which is the perfect segue to my next post “Don Fernando – Our Man in Havana”… the link is at the bottom of this page to the next post in this series!

Images from My First Few Days in Havana 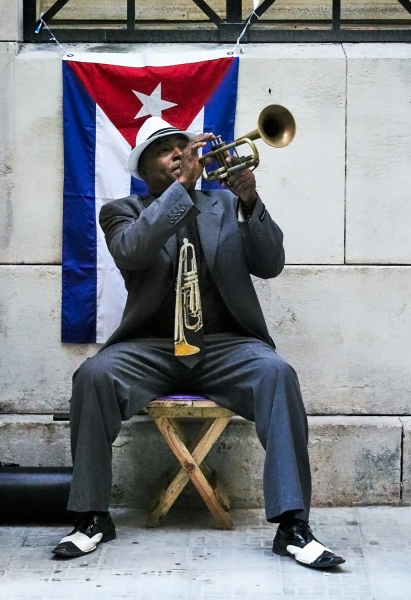 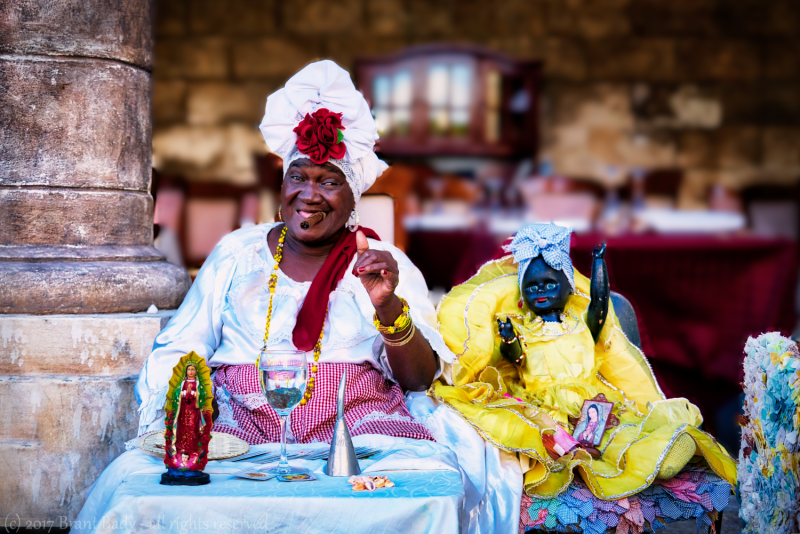 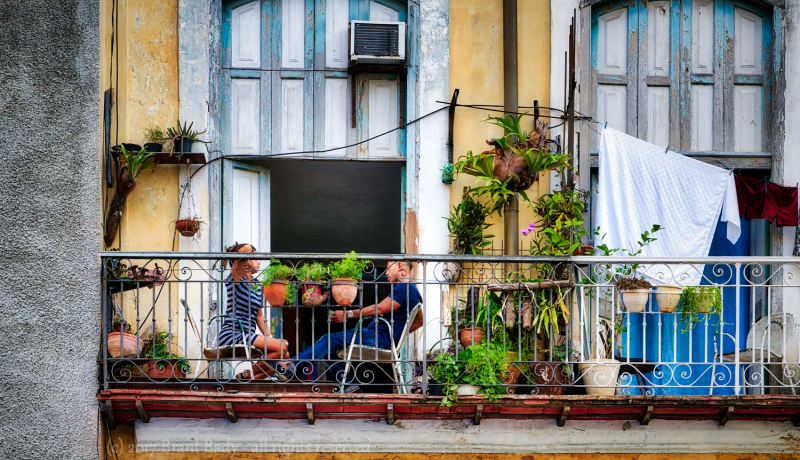 Rooftop View in the Old Town 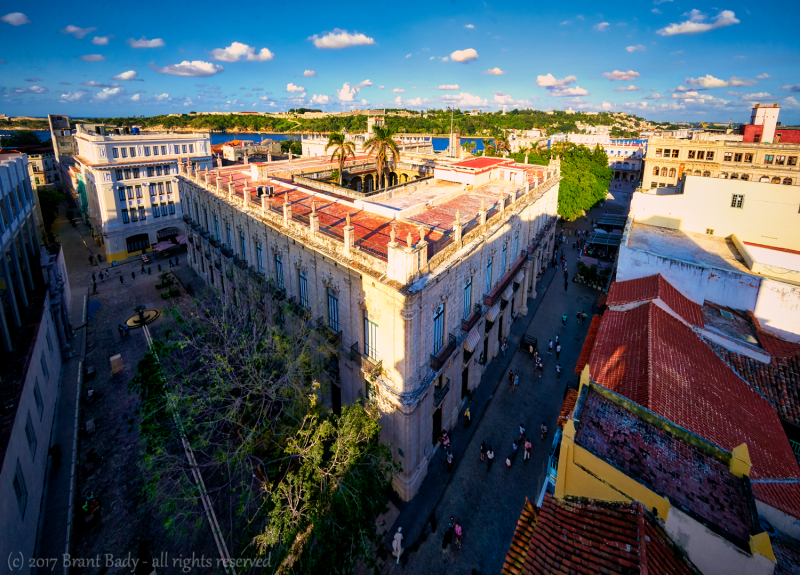 The Fort on the other side of the Harbour 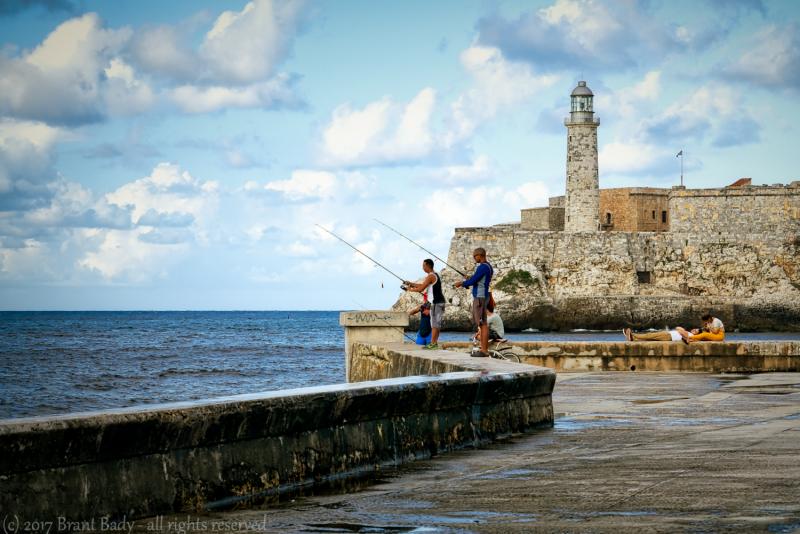 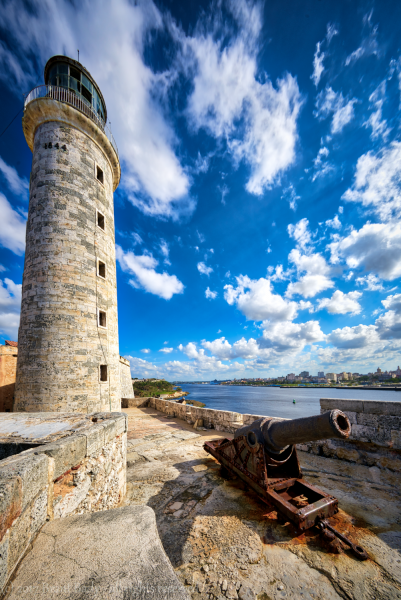 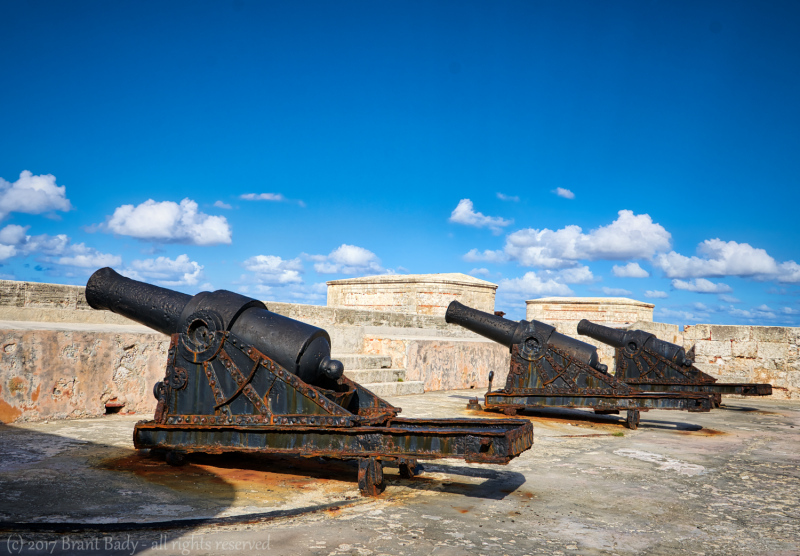 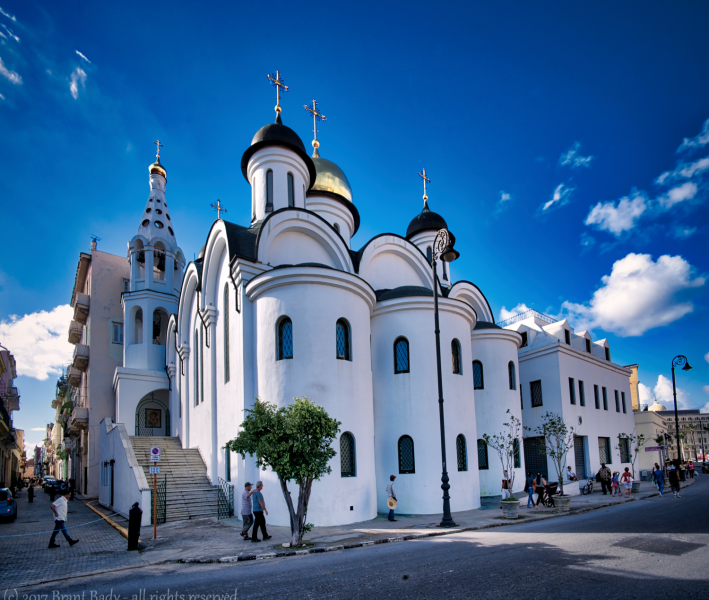 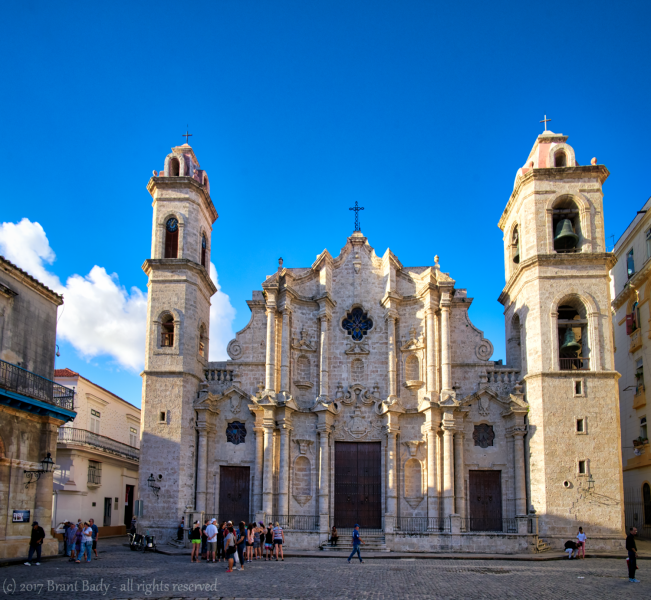 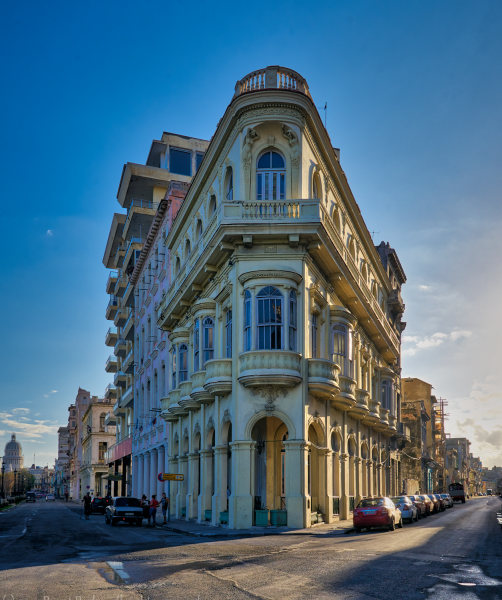 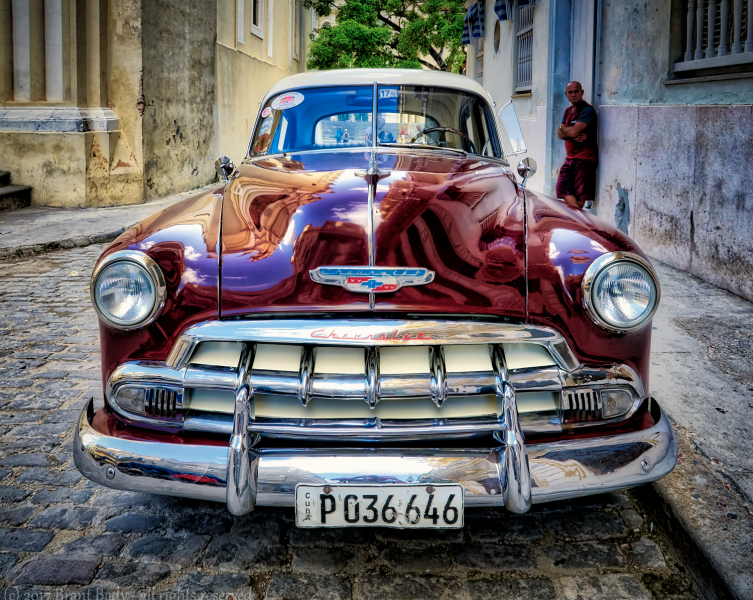 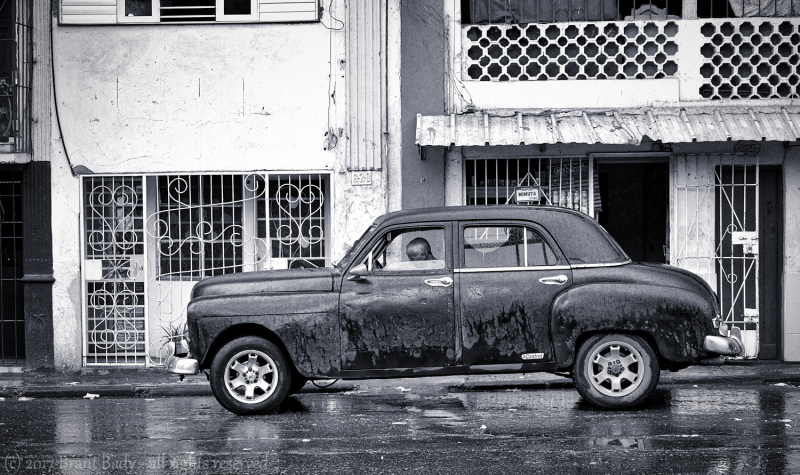 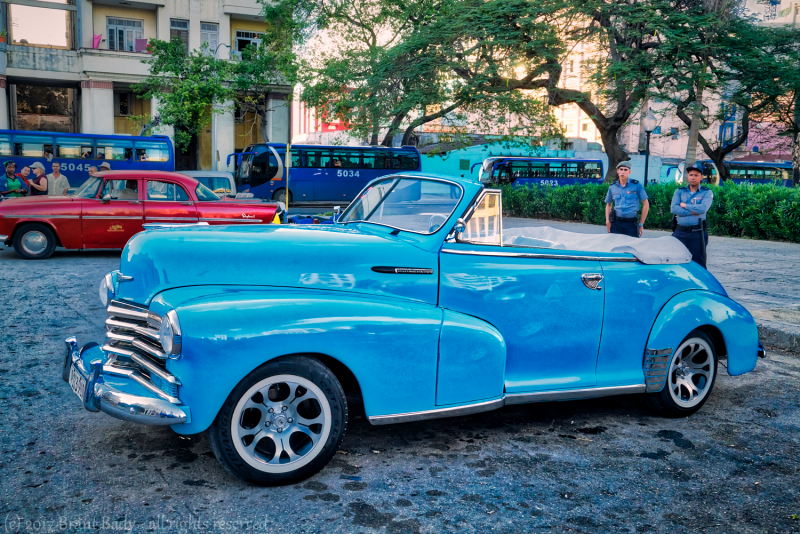 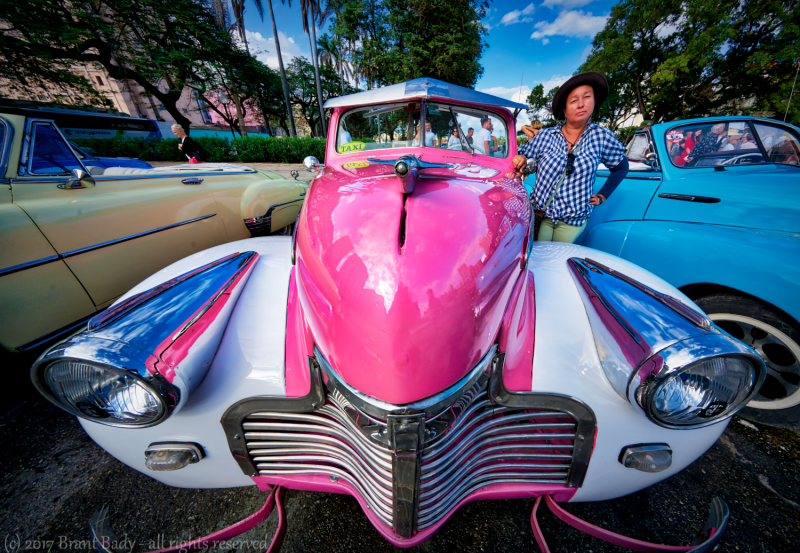 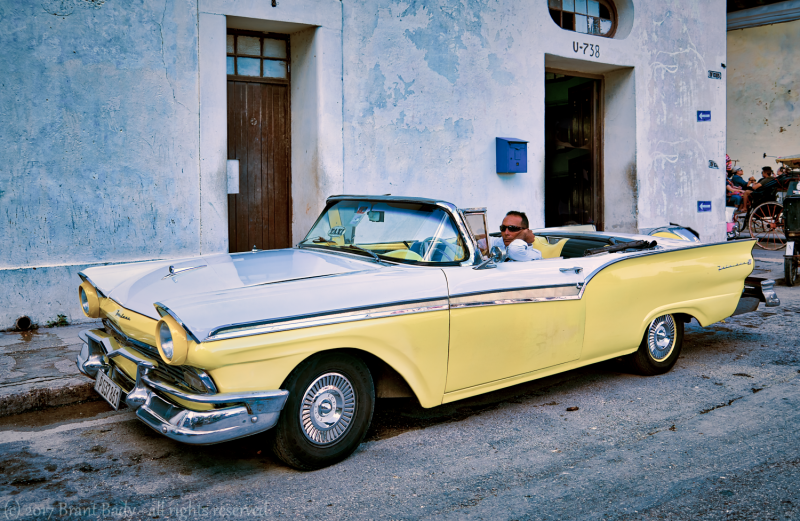