My next stop was Kolkata (formerly called Calcutta).

I had sat with an amazon sized Aussie gal on the plane from Lucknow, and we decided to share a cab into town to reduce the costs. I had found it interesting that she had no compunctions about being a female traveling alone (particularly in India – based on what some other female friends had described), but was spending most of her time in Thailand teaching Yoga on Koh Phangan in Thailand – India was just a side trip for her. Once I found my hotel and got out, she continued onto hers, and I figured that was that, the usual metaphor of two ships passing in the night.

A number of my Indian friends had advised me that Kolkata (Calcutta) would be brilliant in terms of opportunities for street photography – so my choice of hotel was all based on location as opposed to comfort. 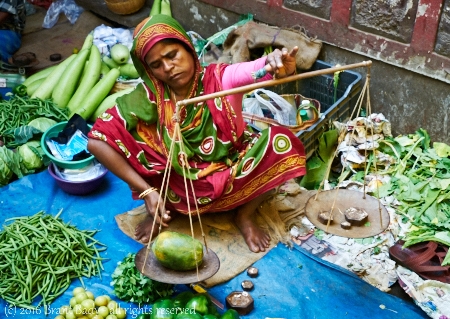 It was plunk in the middle of an area with a myriad of alleyways, and access to nearby markets as well. What is lacked though was a restaurant or kitchen of its own, nor was it close to any other restaurants except a few for local people.  So finding my typical breakfast of toast, omelette and coffee was going to be a challenge.

In fact, I had arrived in the evening, and was starving, so the hotel manager sent me down the road to a place he recommended that wasn’t too far. Ha ha, into the deep end for sure, it was exclusively full of local people and no one spoke any English. I reviewed what others were eating, and just pointed to some kind of curried dish, which they were happy enough to serve me, but without utensils, as everyone was eating with their hands. I pantomimed knife and fork, and got a set no problem, and as the server passed by the next time he generously grabbed a big handful of some kind of veggies in his bare hand and plunked them down on my plate. The taste of the dish was okay, and I didn’t get sick from it, in fact it probably helped me acclimatize to the local bacteria (under the theory that what doesn’t kill you makes you stronger).

The Dwarf Tea Shop – The Guy inside is full size, but the height of his working space is not! 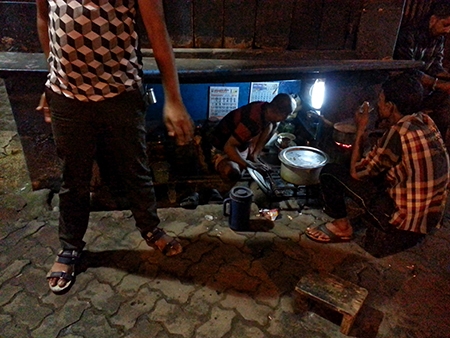 The next morning, on my way out to shoot some photos I ran into yet another traveler, this one was a french guy who had stayed in the same guesthouse that I had in Varanasi, and was now staying in the exact same hotel as I was in Kolkata. Clearly were were on the same general travel path, and at the same budget level – but it does get one thinking that its very easy to get trapped into Lonely Planet Syndrome, i.e. people tend to follow travel guides or other tourist routes because the transport logistics are in place. Breaking free from that path, can be difficult if not challenging (vis-a-vis my trip from Amritsar to Bikaner not being a normal tourist route either – much to my discomfort).

In any event, off I set to explore and photograph some of the streets of Kolkata. I did have a plan in place, and that was to loop through some neighborhoods, and then work my way over to the commercial part of town that would be more architecture related, e.g. old buildings and monuments such as the memorial to Queen Victoria, which is set in the middle of extensive grounds.  While I did wander around the memorial and checked out St. Paul’s Cathedral, neither were intriguing to me that much, and they were full of people.  In fact I was much happier with some of the street scenes that I had found that showcased day to day life in India. 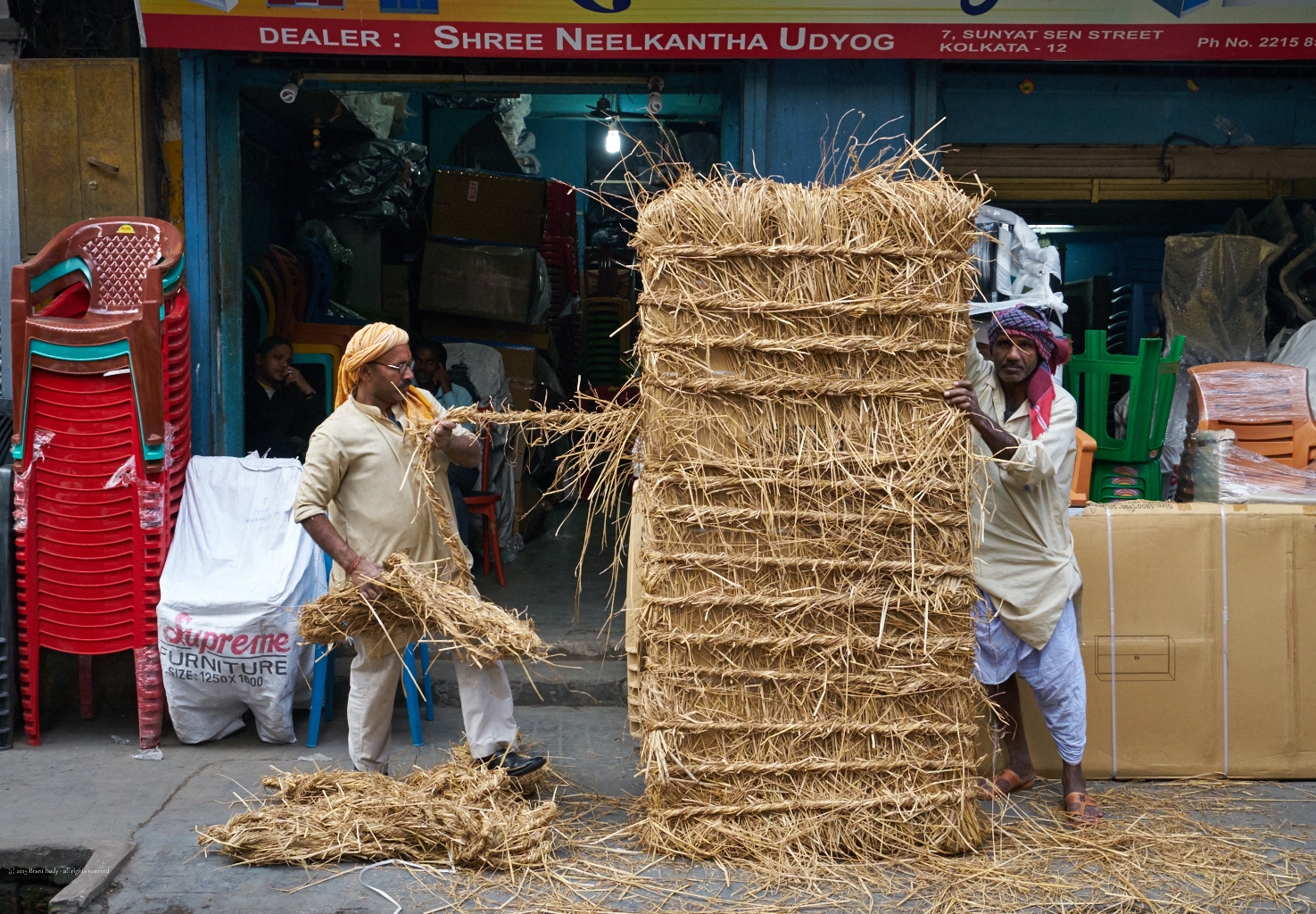 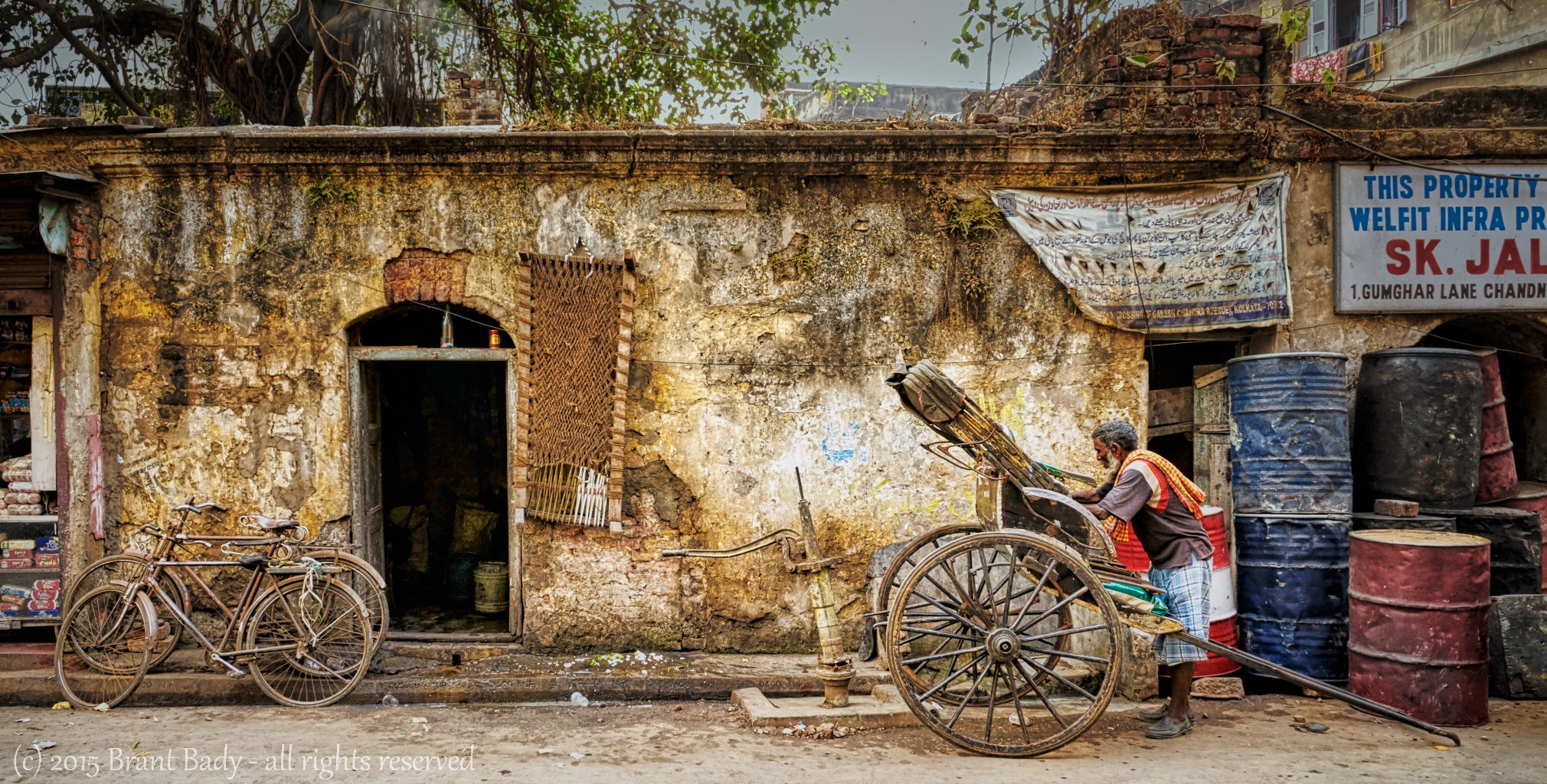 There was also one huge shopping area, with tons of stores in a huge building, but the vendors wares clearly spill out onto the street. 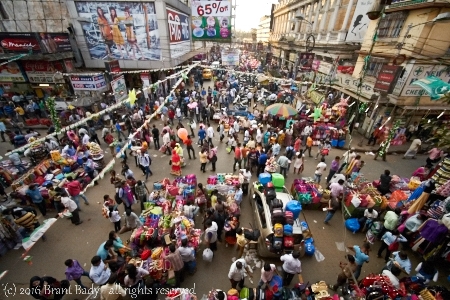 What the commercial sector did have though, was a larger variety of restaurants, and it was nearing the end of the afternoon and I had yet to have a bite to eat all day. I found an upscale restaurant where I could get a beer, and in fact I was due for some comfort food (pizza), particularly after my foray into local food the night before. While I was sitting inside, still wearing my shooting vest with the big black SONY letters on the back, the Amazon Aussie gal passed by and noticed me through the window so she came into have a drink and chat for a bit, before heading off to catch a cab to her next destination.

The next day I headed to one of the major vegetable markets (Kolay Market) that was within reasonable walking distance of the zone I could cover on foot. 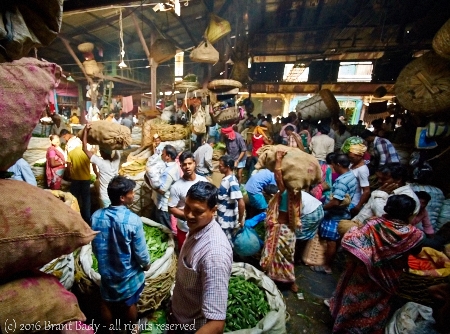 Markets like this are typically a hub of activity so target rich in terms of photographic opportunities, but also can be dark, so shooting images can be challenging. I must say I have wandered around many a market around Asia, but never have I seen anything like this. The enormity of the human effort going on here, the constant agony of the porters who were carrying bone crushing loads, guys who are older than me carrying loads on the backs, shoulders and heads that should have fused their spines, completely blew me away.  I spent a fair bit of time trying to capture the raw human suffering, without contributing to making it worse by getting in their way.

All In A Day’s Agony Series – The Porters of Kolay Market, Kolkata 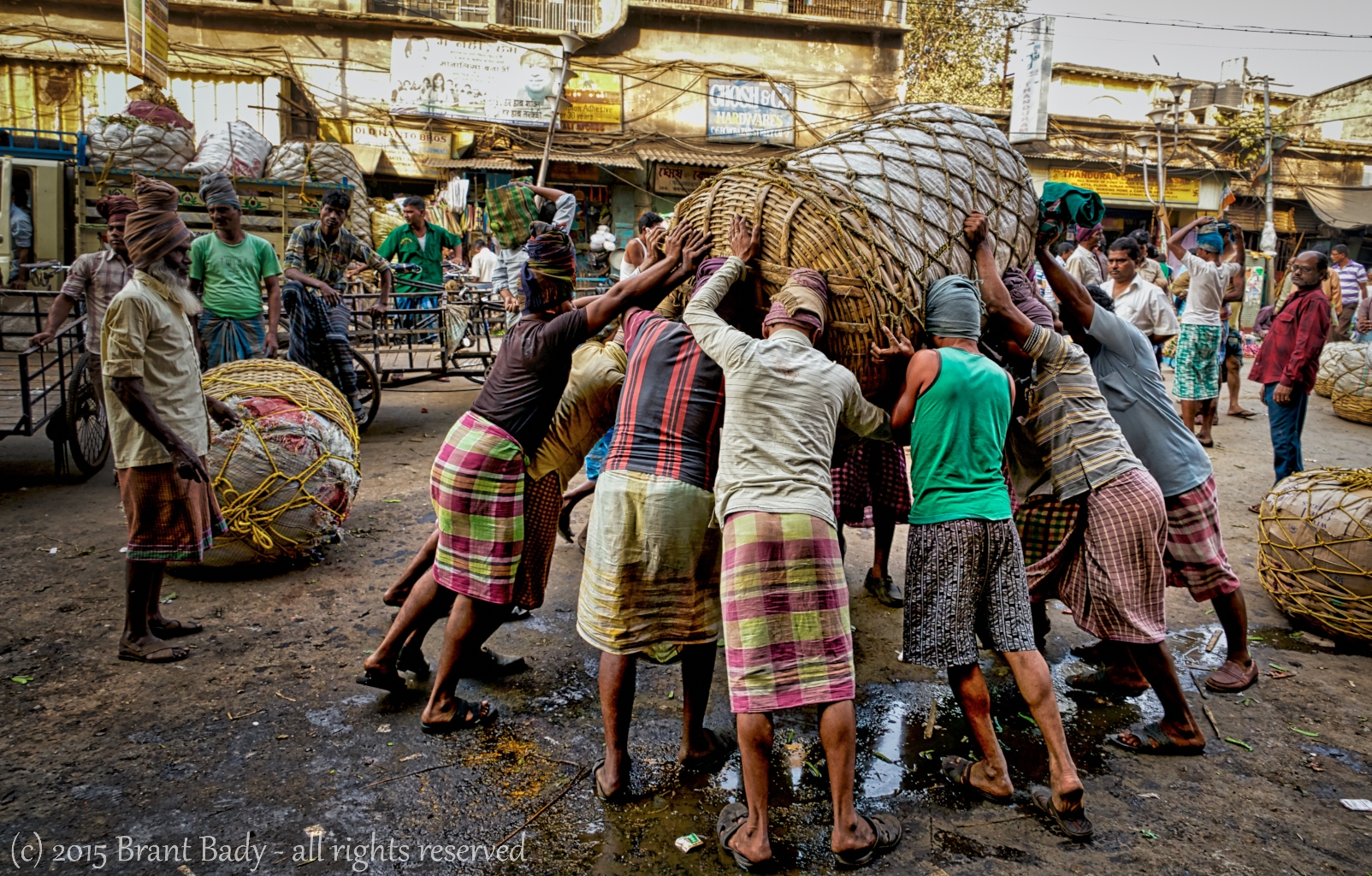 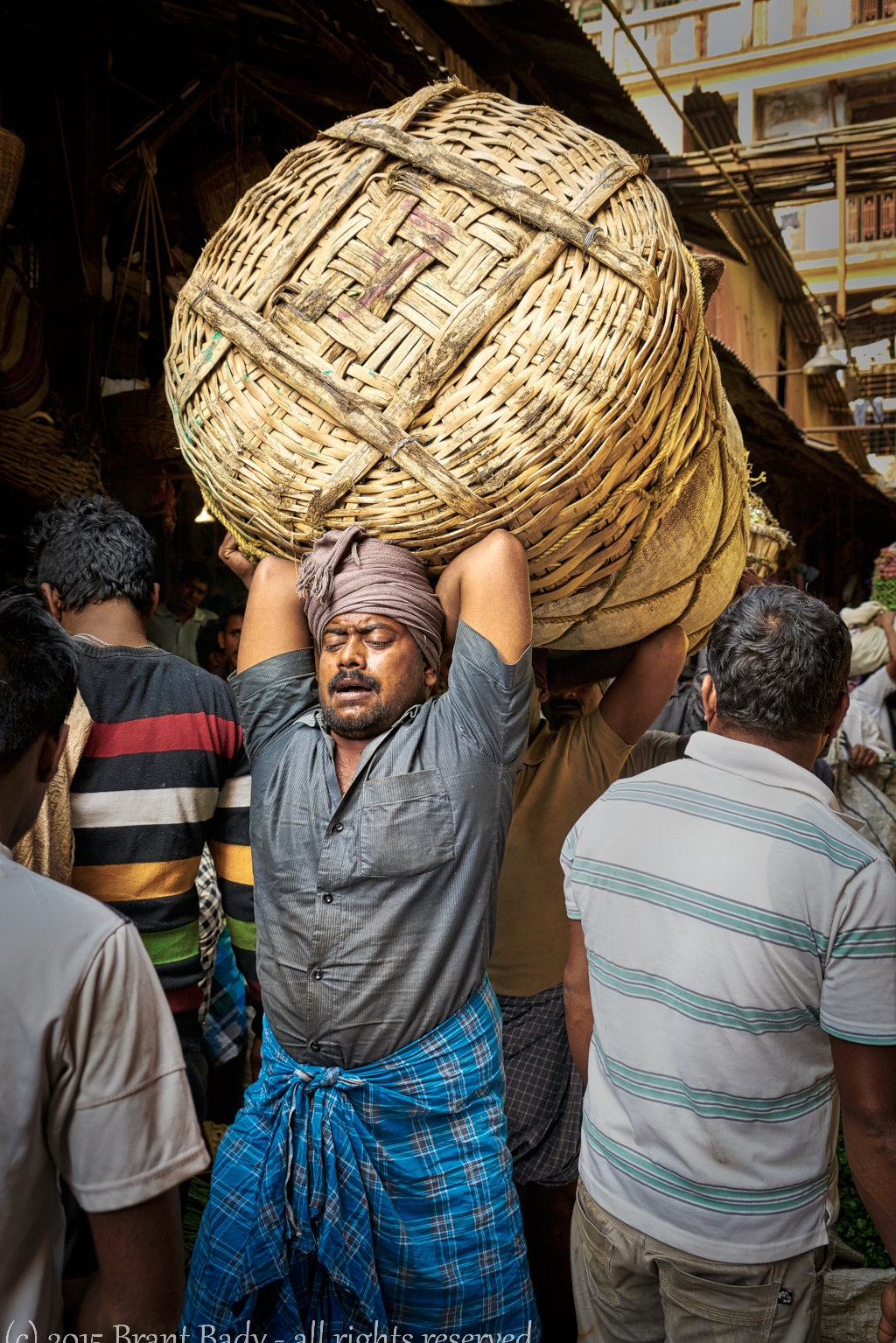 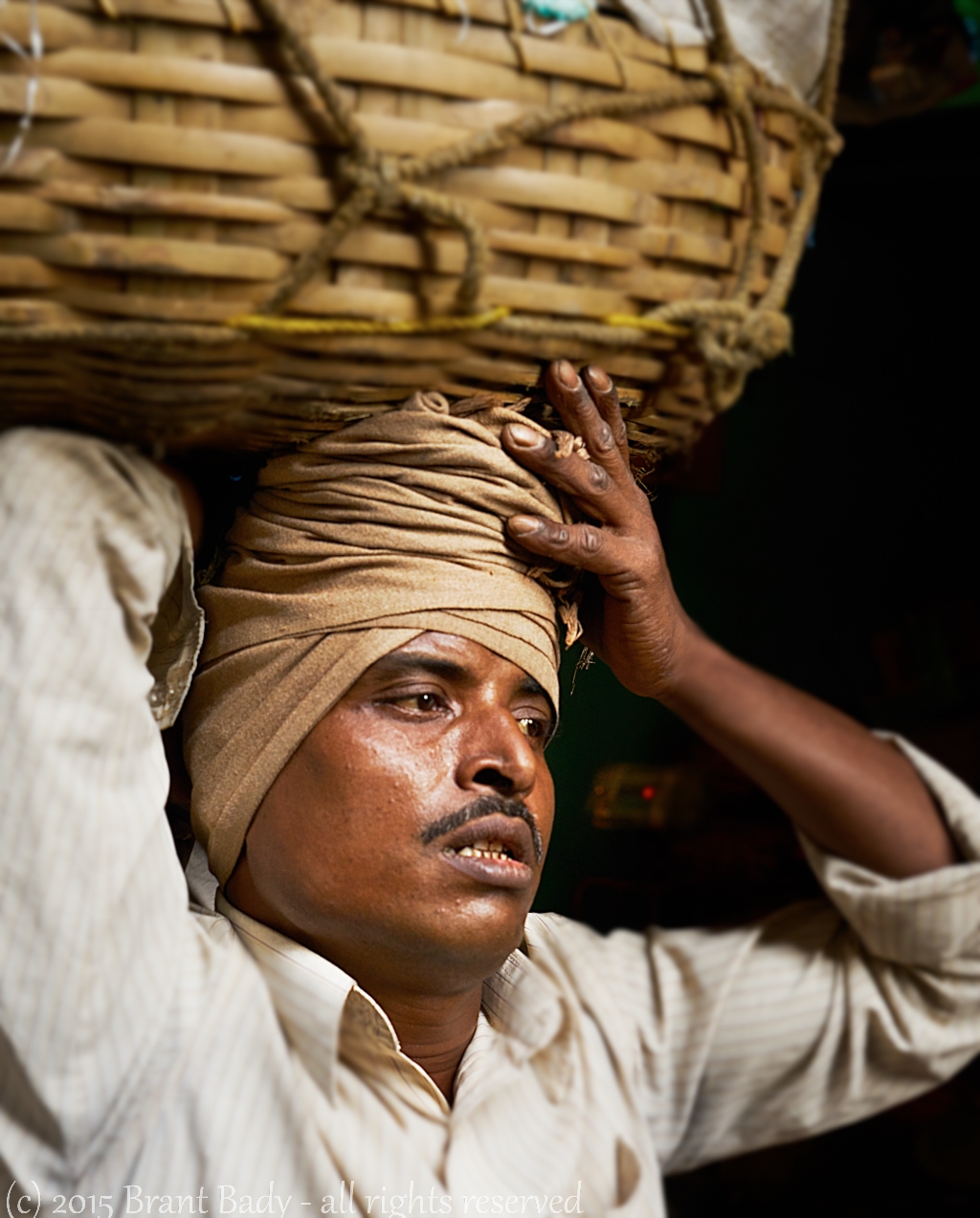 The next morning I was due to switch hotels to a place much closer to the airport, as I had an early flight and didn’t want to get stuck in unpredictable traffic or have to get up any earlier than necessary… as I left my hotel, heading down an alley to get to the main street to hail a cab, there was something strange following me, a scraping sound, and I turned around a couple of times to make sure that I wasn’t about to be run over or something like that, but it was all clear behind me. When I jumped in the cab and threw my suitcase in the back seat, it became evident what was up, one of the two large wheels on my rolling suitcase was missing – there was just the bare shaft poking out.  I had been dragging and scraping it along the pavement myself!

My taxi ride was quite exciting, we hit three other vehicles on the way, and didn’t stop to sort out any of them.  Lets just say that the rules for driving in India are pretty flexible, and staying in one’s lane exclusively is an option – one that is rarely followed.

Luckily my new hotel had decent WIFI, and I was able to determine that there were some luggage shops within auto-rickshaw distance of it, and it seemed prudent to try to replace the suitcase in the much larger city of Kolkata, rather than messing around in my next destination, Chenni.   At the mall I scoped out a few shops and finally settled on a 4 wheel roller, that could, if need be, be carried on. It seemed smaller than my previous suitcase, which actually had been a book-bag with many compartments and huge wheels (the huge wheels do make a big difference, especially when on dirt or sandy roads or cobblestones) – but in fact because the new one was just a square vessel, it could hold more stuff due to packing efficiency, and now I much prefer it (small wheels excepted).

Of course, the contrast wasn’t lost on me between: the porters the day before who labored under those tremendous loads, likely for subsistence wages, and myself – whose major challenge that day was to go to the shopping mall and purchase a new suitcase. However, for a few years in my twenties, I too had known hard physical (and dangerous) labor, where one collapsed exhausted at the end of a very long day, and at least at the start, the compensation was literally “pocket change” for a day’s work. None-the-less it was still humbling to see those porters at work, and now be able to tell a small bit of their story to some of the wider world.