The name Bengalaru means “City of Boiled Beans”, supposedly named by a Maharaja who was wandering through here and was offered that for dinner by one of the inhabitants. Bangalore as it is also called it is now the third largest metropolis in India, the largest city in Karnataka state and the 18th largest city in the world!  This kind of urban sprawl explains why the taxi was so expensive, as the airport is far far out of town. Bangalore is a hub of information technology employment that rivals Mumbai, and with that kind of genre of populace comes a whole ton of hipster hangouts and chic restaurants, pubs and entertainment outlets. So “City of Boiled Beans” it ain’t, or at least not any more, truthfully it is quite the opposite!

However neither is the city a hermetically sealed edifice of steel, concrete and glass. When I was visiting, it was all the rage in the local papers how there had been leopard sightings near a school and in some neighborhoods in town, and that the local authorities were setting up traps baited with dogs inside the city.

In fact, this Youtube video shows the subsequent leopard attack inside a school property in Bengalore. After 10 hours the leopard was eventually tranquilized and captured, and presumably the the forest official that was mauled was treated. This actually occurred on my last day in Bengalore, I left the next morning for another city, so I wouldn’t have been likely to have heard the news, but I am sure the locals were talking a lot about it.

I would like to point out that my home town back in Victoria, B.C. Canada also has occasional big cat visitors, the island we are on is home to about 800 estimated cougars as of 2015.   Back in 1992 a cougar was on the loose in the very epicenter of the city, charging around on the front lawn of the prestigious Empress Hotel that overlooks Inner Harbour.

For the purposes of my tour, Bengalaru was mostly intended to be just a necessary stop on the route of getting from the east coast of Southern India to the west coast, but it turned out to be interesting unto its own, particularly from a food point of view.

I literally gorged myself the first night at a restaurant renowned for all-you-can-eat kebabs (the Kebab Studio, at the Goldfinch Hotel). The buffet included a really nice salad bar which I sampled, but I didn’t even get to the buffet section of entrees, as the kebabs had me totally stuffed – and the waiters keep bringing me rack of them. The second night I crashed a 5 star hotel’s fine dining restaurant (Karavelli, in the Gateway Hotel), at and tried its splendid Lobster Balchau dish. Pacific spiny lobster is not especially tasty compared to the Atlantic lobster, but the blistering curry it was floating would have made that a moot point regardless. Darn delicious I must say. The last night I tried Chateaubriand for the first time at another place, and at $10 CAD it was a great deal (although a touch expensive by Indian standards for food costs), and it was cooked just perfectly.

So just to clarify, I love indian non-veg food. Thai curries have such a limited range in comparison to Indian curries, and as I mentioned previously, the junk we get at home pales in comparison taste wise to real Indian food in India. However I totally avoided eating Indian food for breakfast and usually for lunch because of the totally unpredictable “atomic bomb” effects that might occur middle of the day. But for dinner, my tune was “baby, just bring it on” – as hot as they can make it is just fine with me!!!

I had also been trying to round out my diet by eating a lot of “green salads” in India. So to explain, you might think that a green salad would have some lettuce in the mix, not a good idea because it would be washed, and water is the primary vector for stomach troubles here. In fact a green salad in India actually consists of slices of tomatoes, red carrots, cucumber, red onions, with some lime wedges to squirt over it. So its not totally false advertising, the cucumber and lime juice do add a touch of green!  Oh I forgot to mention the other bit of green you frequently get, but not always, a few green bean-like vegetables… but they aren’t beans they are super size hot chilies. Note for future travelers here, if you order an omelet you might consider ordering it “plain” or you will get some of these chilies sliced into it, with some masala spice to boot.

Back into the deep end of the pool, I went down to the largest market in Bangalore, and jumped into the thick of it with my camera in hand. Pressing the flesh indeed, the locals are quick with elbow jabs if you are seen to be blocking their way, so typically I would look for a quieter back-eddy in this sea of humanity and park myself for a bit while looking for photo ops to wander past me. No real concern on my part about pickpockets, almost everyone shopping at the local market aren’t typically on the higher end of the monetary scale, so it would be slim pickings for pickpockets in general. But never-the-less, I do always carry a decoy wallet in my back pocket and the rubber bulb dust blower I use to clean lenses goes into my front pocket on top of my real wallet as an awkward barrier to quick access by the uninvited.

“Calm in the Eye of Chaos” 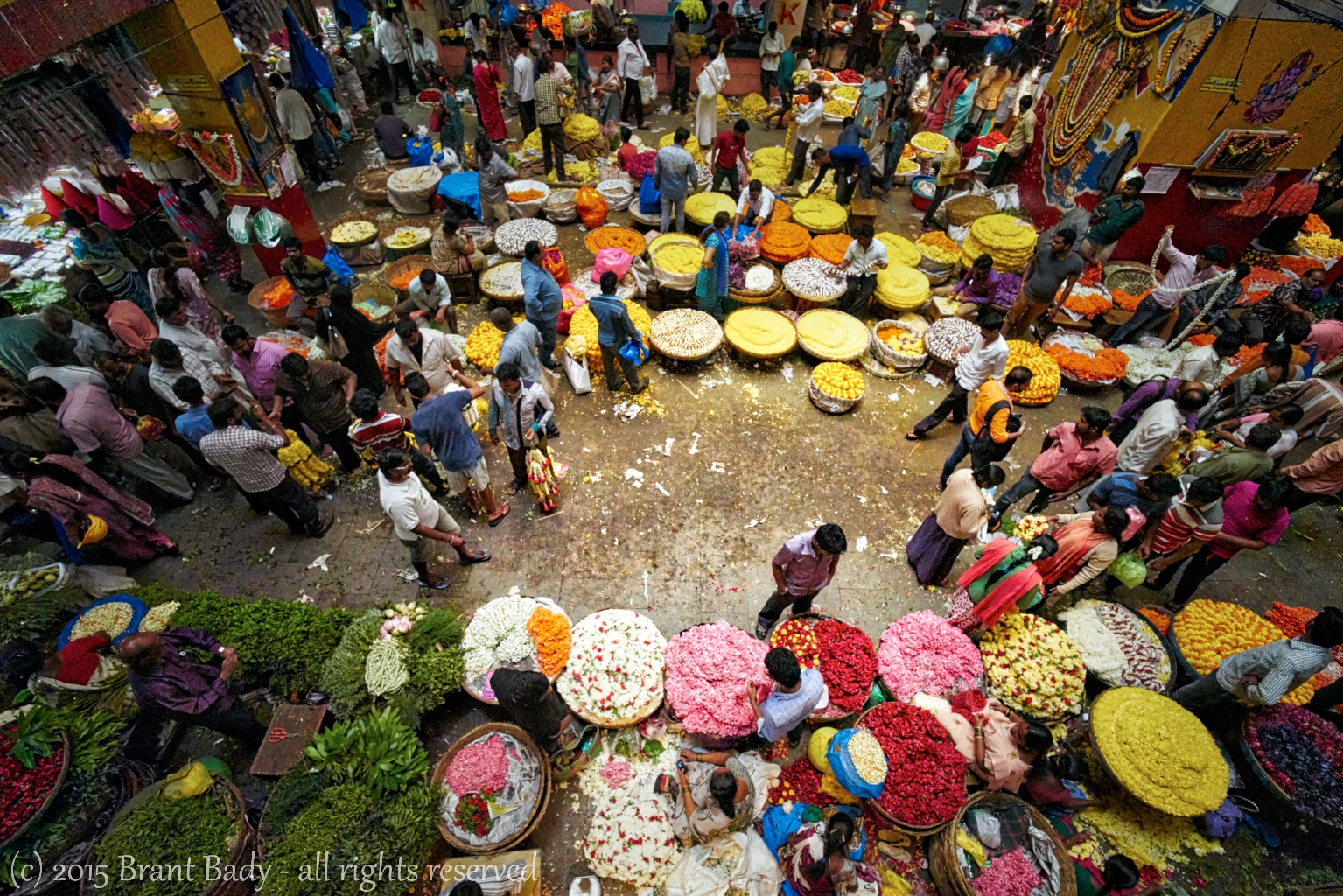 “The Frontman and the Flower Vendors” 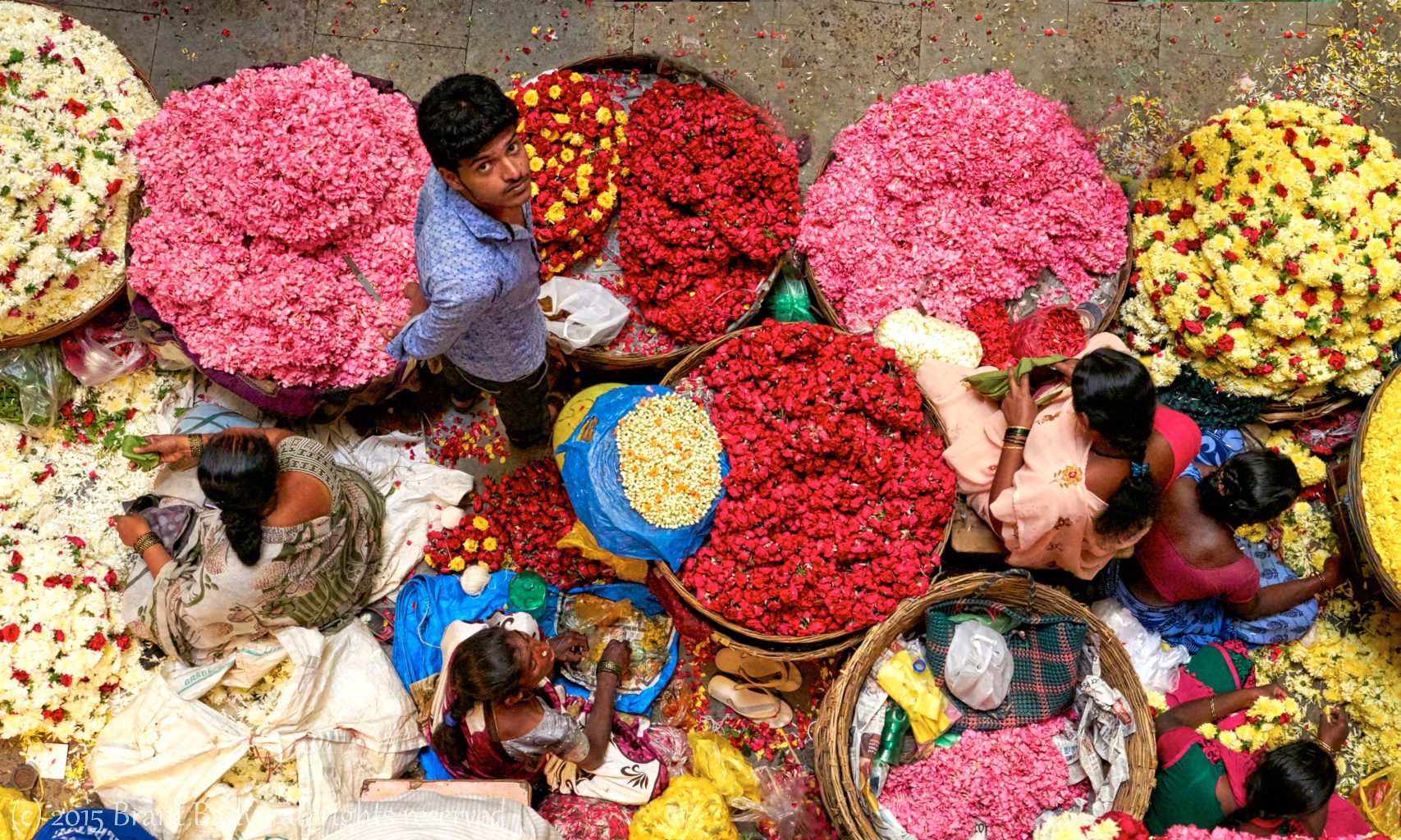 Bengalru had one small surprise left for me, my hotel was decent and clean, but I had been lying on the bed one morning catching up with some travel logistics on the Internet, and found an unwanted guest in the bed – a small bedbug working its way over to try to get a blood donation from me.  In any event, when I advised the hotel, they immediately moved me to a different room on a different floor.

Sidenote: Bedbugs can be found anywhere, even in upscale hotels, and this was the first instance I had come across one in India (compared to my trip just previously in the western USA where I actually got bit a number of times).