I fell in love with real Thai cuisine very easily because of the fantastic flavours, and its sophistication in terms of combining flavours compared to western cuisine.   Just so we are clear, I am talking about the Thai food that is normally only available in Thailand, not the other version that is all to often prepared and served outside of Thailand.

Over the course of almost twenty visits to the Land of Smiles, it became my mission to learn as much as I could about Thai cooking myself. Often that task involved visiting friends in the various provinces all around the country, and sampling the regional delicacies and more unusual dishes, some of which would certainly qualify as suitable snacks that only a Honeybadger could love.

One such visit was to see a friend living in Ubon Ratchathani, which is close to the eastern border with Laos, and just above Cambodia. This area is part of the Isaan region of Thailand, and it see’s a limited numbers of tourists each year. It certainly is the poorest region in Thailand, but in a number of ways it truly is the heart of Thailand to most of those who visit there.

My friend Miss H. asked what I wanted to see in and around town, but instead I put her on the spot a bit, and asked her if we could spend the afternoon cooking together. So we went to the nearby town of Sisaket to go to her father’s house, where we could cook to our hearts content without disturbing anyone. It was a pretty basic setup, one counter to do the preparation with a few utensils such a mortar and pestle (an essential tool for preparing Thai cuisine), and a charcoal burning stove/barbeque sitting on the floor inside the house.

Miss H. wasn’t necessarily a trained cook or chef, but she had picked up some skills from her sister, and would often refer to notes. We prepared four dishes from scratch, but it was the last one that really caught my attention… it was called “larp moo”, a sort of chopped meat salad. The main ingredients were chopped pork, shallot, and kaffir lime leaves, uncooked rice which is roasted then ground, fish sauce, and finally lime juice added to taste. She had just finished putting it together, and proclaimed that she had forgotten a very important ingredient, “mott”. So out into the yard we went looking for mott.   We circled the house looking high and low and came back almost to where we started – she was just complaining that she had grew up here in this house as child, and there was always mott around, when she spotted some! A branch on a tree was hanging down, and it was thick with big red ants!

Image Courtesy of HAH [CC BY 2.5 (http://creativecommons.org/licenses/by/2.5)], via Wikimedia Commons

Miss H. had a bucket of water with her and simply brushed the ants into the bucket where they quickly drowned. Back inside the house, she strained the ants from the water and sprinkled them right on top of the larp moo as a garnish! I am not particularly squeamish, and pretty adventurous with regards to food, so I tasted it including a few ants.   The red ants added a strong sour flavour to the dish (they like to consume mango leaves, which gives them the sour lime-like flavour).   It was absolutely delicious, and I suffered no ill effects!

WARNING – do not try substituting ants from home, or even black ants in Thailand instead of red ants..

Larp Gai (the version of this dish made with chicken, and without the ants as it was prepared back at home, but very red and spicy though. 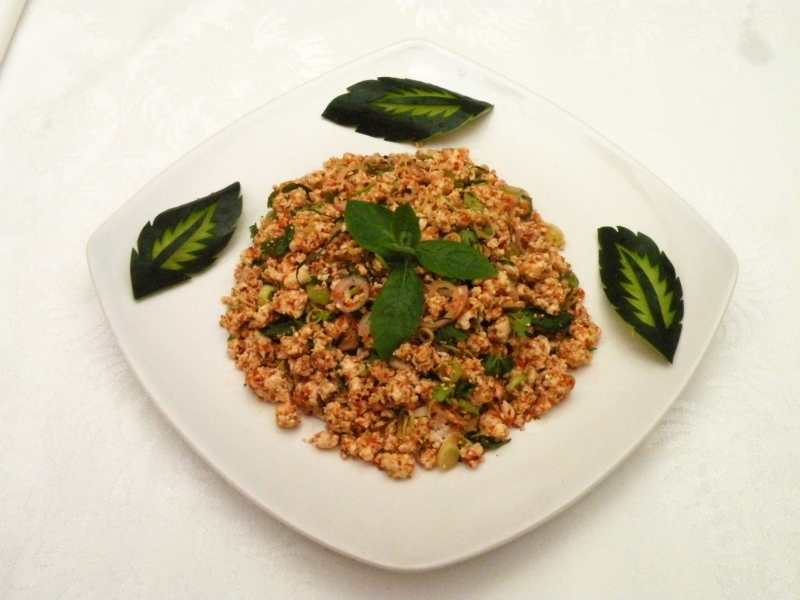