Having just completed my tiger safari in Ranthambore, I was looking forward for something a bit different at my next stop, Lucknow, because it has quite a reputation as being a “foody” destination. The Nawabs of olden days had enjoyed their food, particularly the meat dishes (this being Mughali cuisine), and had contributed to the culinary reputation of the city by being patrons for that as well as other arts.

I had arrived at my hotel fairly late, and was ravenous, not having eaten anything except a small breakfast in Sawai Madhopur before boarding the train. So I decided to be a glutton and order a full order of Tandoori Chicken. I polished that off in short fashion, and it was not only delicious, but the chef had gone the extra mile and done a very nice presentation on the plate.

I was actually quite impressed by the hotel, SSJ international, while not luxurious, the room itself was quite modern, very clean, and the staff were exceptionally helpful and professional.

There were two food places in particular that I wanted to track down during my visit, so I tried to incorporate them into my exploration plans. One was Tunday Kebabi, and the other was Rahim ki Nihari which purportedly served a mutton based Nihari, and other dishes such as Paaya, and Kulcha, that were all supposed to delicious and very special!

In the afternoon I headed out to explore the Chowk market area, it being a maze of small alleys and paths – often a great indicator of a place that will provide a wide range of subjects for street photography. I certainly wasn’t disappointed. One of first things I came across were a bunch of guys doing some electrical “rewiring” up on the second story of the alleyway. Their safety equipment included a bamboo ladder instead of an aluminum one, wearing rubber boots, and using a huge rubber glove to grasp the “hot” 220 volt wires. Yikes – I think the bird’s nest of tangled and intertwined wires came me the most pause. I didn’t linger too long here, as they quickly noticed me taking their photographs, and started smiling and waving instead of paying attention to their work – so I didn’t want to be a distraction that would turn out to be dangerous for them. 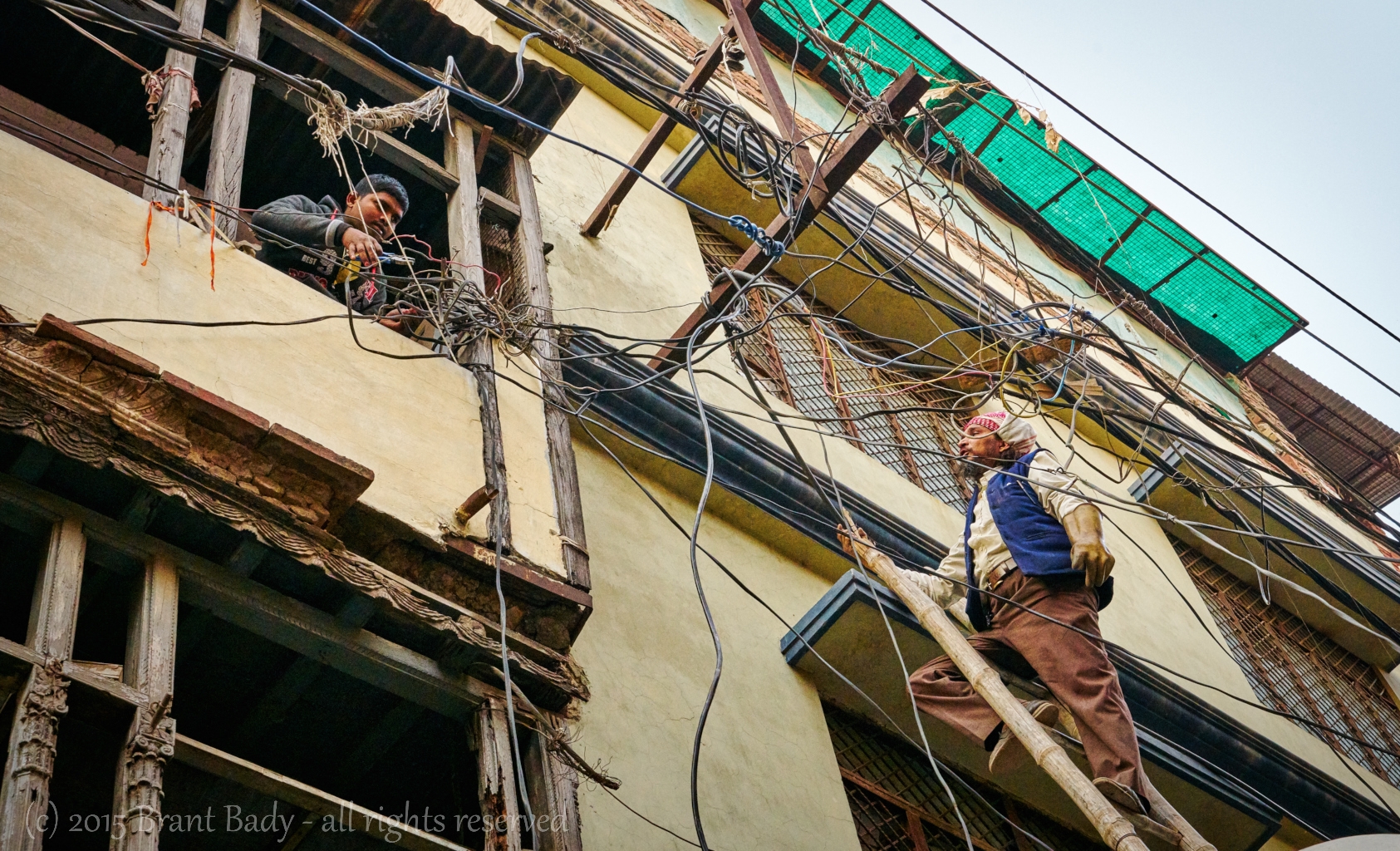 This area seemed to be a hub of garment manufacturing, as there were numerous shops where sewing machines were rattling away non-stop as the cloth sped between the machines feet and the table, more like it was being extruded than assembled. In another shop, white cotton garments were being imprinted with indigo dye in complex patterns that were built up through multiple printings of wooden blocks used as stamps. 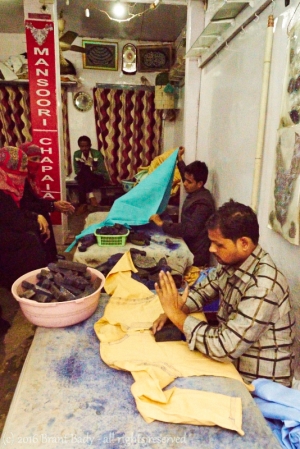 Intermixed with the garment stores were a few places where workers were pounding gold flat to make gold foil, some local eateries, and every so often a small shop where betel leaves are prepared for those who are addicted to chewing it. 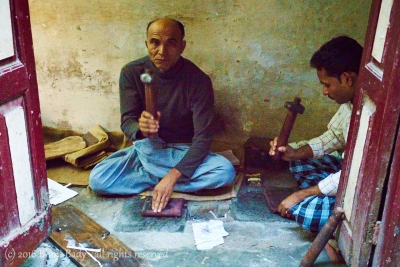 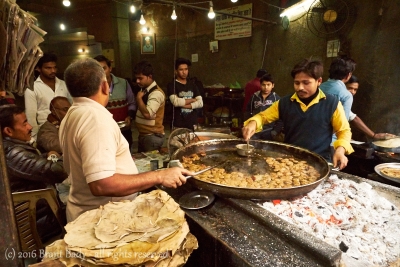 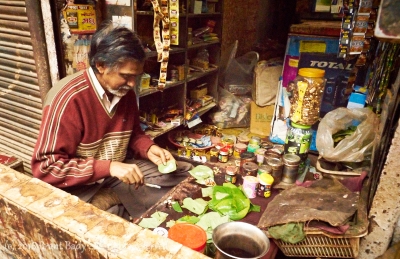 There were also dozens or more retail shops advertising Chikan style clothing, which is a Lucknow style of embroidery, with references to it going back as far as having 3rd century B.C.

At the end of the alleyway I was following, there were a number of “colour” shops, whereby powered dyes in a literal rainbow of highly saturated colours were sold by weight, with traditional balance scales to the weighing. 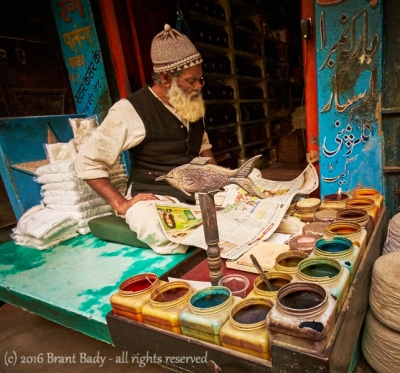 The two gentlemen at this shop were quite amusing as they continually scanned the crowd passing by, looking for prospective dye customers, who they could intercept before their competitors nabbed them first. 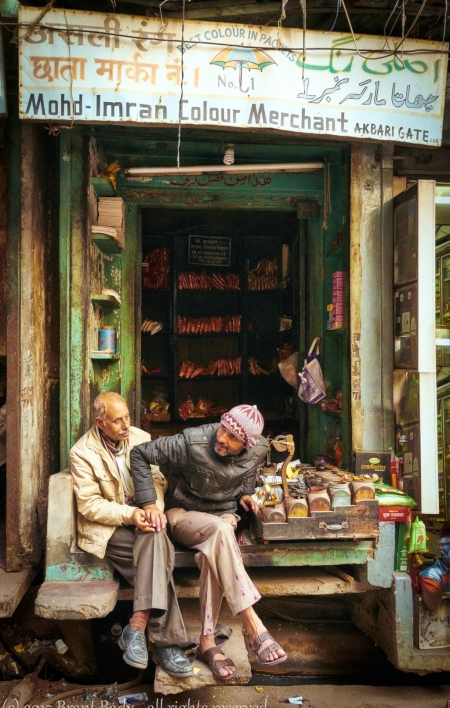 The dyes are used for a variety of purposes, both decoration on skin, dying of clothes, and in festivals such as Holi where it is thrown as well. 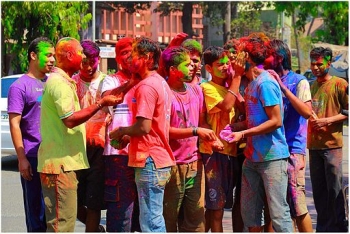 Tunday Kebabi was pretty easy to find, and when I arrived I went down to the lower floor where the restaurant proper was, it looked more like a fast food joint, than some pinnacle of culinary expertise. It wasn’t particularly difficult to order off the menu, as the selection was fairly limited. In fact the room service menu in my hotel had a greater selection. What arrived were less like kebabs, and more like mini-hamburgers or sliders, with some veggie condiments on the side. It tasted fine, but was a letdown in terms of what I had expected. Ask dusk fell, I walked the crowded streets of Lucknow towards my hotel, which was still quite a distance away, but finally I just grabbed an auto-rickshaw who I was able to communicate the address/location of the hotel.

As a side note, there is not one single time in India that I didn’t feel safe in walking the streets (pickpockets notwithstanding), even well into the evening.

The next day was monuments day! Lucknow has one section of town where a number of them are essentially clustered. I started at the furthest away from my hotel (Chota Imabara) and planned to work towards the closest (Bara Imabara). This idea also dovetailed neatly with the size and scale of monuments, leaving the largest and most impressive for last in the afternoon when the light would be more favourable, and I had hoped to find the restaurant Rahim ki Nihari as it was supposedly just down the road from Bara Imabara.

The best laid plans of mice and men…. that Steinbeck quote should include traveling photographers in that list. I wound up paying for a single entry to Chota Imabara, and then later on at Bara Imabara I had to buy a combined ticket which duplicated the former. Had I started in the other direction, it would have been simpler and cheaper, but I considered it my contribution to the preservation of Indian antiquities and archeological sites.

Chota Imabara, is essentially a tomb, but it also contains a mosque, two smaller scale emulations of the Taj Mahal that are tombs themselves, complete with Taj style walkway and pond, and the main tomb is very elaborately decorated with calligraphy on the outside, with a collection of chandeliers on the inside. 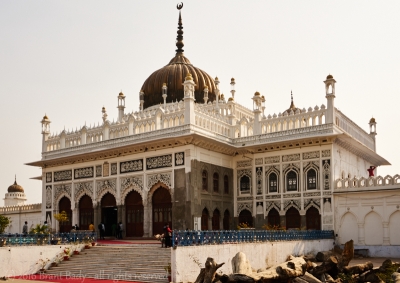 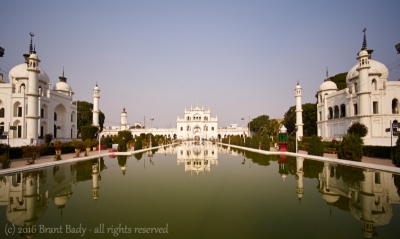 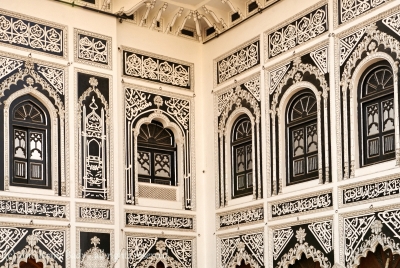 Continuing down the street are two historic gates, a clock tower (the highest in India), and Hussainabad Picture Gallery. At the time of my visit there was a lot of renovation / construction going on along the street which what appeared to be a huge pond/ghat being constructed at the base of the clocktower. 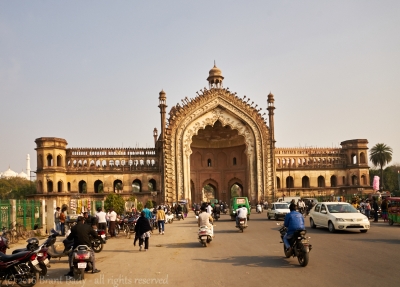 Bara Imabara however, was the main target of my visit to this area of Lucknow. It is a huge complex that is very crowded with visitors. Surrounding a large courtyard/central area are: a mosque, the main hall with one of the largest vaulted ceilings in the world, a step well, and a series of labyrinth like corridors, for which couples are not allowed to enter alone without a guide – due to the perceived risk of hanky panky going on in out of the way places. 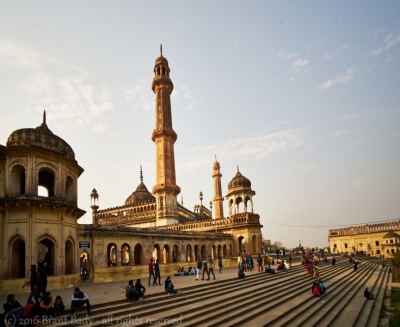 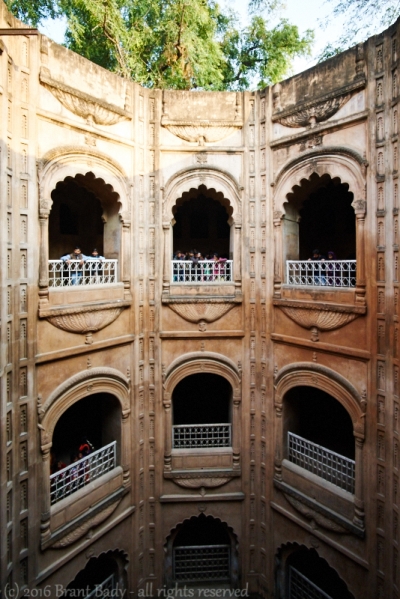 As the light started to fade, I set off down the street from Bara Imabara, looking to find Rahim ki Nihari restaurant, but the only establishment in the area where it was supposed to be located, gave no hint that it served food other than some smoke coming off a cooking fire, and there were no tables or chairs – So much for my second culinary target as well – I was truly out-of-luck in Lucknow when it came to finding the best food and experiencing it as a foody paradise. One could view this a being somewhat symptomatic of touring much of India on my own for three and a half months – its not possible to plan everything in advance, and sometimes you just have to go with the flow and experience things as they happen!

The consolation being that I will clearly have to return in the future, and this time with a better food plan.